Posted on Published: April 1, 2011 Categories Beyond the Sugar

Last week it was brought to my attention that a website was importing my entire feed into their own blog and essentially passing the content off as their own. I spent a great deal of time scrolling and clicking through this site to find out they had taken many, many entries…from recipes and giveaways to my Beyond the Sugar posts.

It was as though my blog was now being housed somewhere else. Typically I don’t get my panties in a bunch if people use original recipes (that’s what they’re there for as long as you give credit where it’s due) or use a photo and then link back to the recipe, but this pissed me off. I felt like someone had broken into my house, stolen all my belongings, and then furnished their home with them.

With help from the lovely Amber, I was able to track down this individual’s host and after numerous not-so-polite phone calls and emails was able to get my content removed. Although part of me would love to share the website with you, that’s really not my style. I’m a firm believer in karma and am certain this individual will get a taste of his unethical practices at some point during his online “career”. Until then, I’ll curse him out in the privacy of my own brain (and maybe home)!

This is not the first time this has happened, but it was the first time I encountered real resistance and time consuming processes to get the content taken down – time I should have been baking for you guys! Because of how many hours this took me, it prompted me to a make a change in the way my feed is displayed. Publishing a full feed means it’s incredibly easy for someone to steal my posts – and as I’ve seen, not so easy for me to take them back.

You might be asking yourself why it’s so important to try and get my stolen posts removed from some other site. Well, you see, when it comes to websites, there’s this whole Google ranking thing. Google actively searches for duplicate content. When they find exactly duplicate content in large amounts, they blacklist the site that they determine to be the thief. Only sometimes, they choose the wrong site.

What does it mean when you get blacklisted by Google? It’s like you don’t exist. Your site does not appear in any search engine results. Someone could search for “My Baking Addiction Chocolate Cupcakes” and my site would not appear in the results. It’s happened to other bloggers, and it took them months to get their sites relisted with Google. That’s not something I need in my life, lovies!

How I Found Out
I have received several emails and comments asking how I found out about the infringing websites. Well, I found because I have some amazing food blogging friends and readers. Amber came across the main site when she did the guest post the other day because I linked to her site. When the website stole that post, she got a second track back, from them. Usually with sites like this, they’re basically running a program that takes in your feed and immediately republishes it on their own site. That means any links within the post will also get automatically republished, because they’re not doing this by hand. So the way to make sure you know about it? Try to relate your current post to something you’ve previously written about, and link to it. Then, if someone’s taking your feed and republishing it, you’ll get the trackback on that older post. On WordPress, it should show up in your trackbacks. {Thanks for the explanation, Amber}

Steps I Took
Since this site was essentially stealing my entire feed, I had no intentions of contacting them directly, so I completely bypassed that step. First, Amber used Network Solutions to locate the host for me. Once I had that information I made some phonecalls. The host required that I file a formal written complaint with their abuse department. Katie of goodLife eats linked me (see, I told you food blogging friends are all kinds of awesome) to a post that was written by Elise Bauer of Simple Recipes over on Food Blog Alliance. Elise’s post pretty much outlines the steps you should take and even provides a template letter. Elise also explains the process of contacting Google, so this is definitely a must read if you are a blogger.

I’ve gone back and forth for weeks about adjusting my feed to only display a summary… I’ve lost sleep over it (well, not really, but I tend to exaggerate for effect).  I know this will not eliminate the issue; I’m simply hoping it will help reduce the number of occurrences.  Quite frankly, I’m sick of playing blog cop and prefer to use my snarkiness for other, more fun purposes (like making fun of Brian!).

I know a partial feed is a pain in the keister and I am sure some of you might consider a revolt. In fact, I’ve already received numerous emails from devoted readers pleading with me to change it back to the full feed. Trust me, we are looking for an alternative, but in the meantime, the summary is the best option for My Baking Addiction.

I apologize that one jerk face has ruined this for the whole class. But really, I promise you it’s only a simple click through.

I’m hoping a WordPress Plugin will at least allow me to lure you in with one drool worthy photo and a few paragraphs! I hope you can understand my decision, and not be too annoyed with me. Direct your annoyance at that other dude. (Cosmically of course – I’m still not going to give you his URL. But Amber might, if you ask her. She thinks he deserves it.) 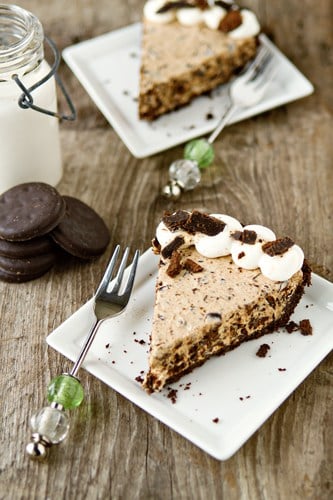 Ignorance speaking here: If I find something I really like and it's out there for all to see, how do I not become the evil person this guy is if I repost it? Simply by giving credit? I mean, seriously, I'm drooling over the black magic cake but I don't want to share it on my community blog if it will take away from you.... Seriously sincere,

ReBecca- I personally recommend that people always ask before using photos and it is never okay to completely copy a recipe, post, and photo and post it to your blog - even if credit is given. Period. Which is what the gentleman was doing in this case. -Jamie

I am stunned that someone would do this to you. Thank you for sharing this nightmare and telling us how to avoid this happening to us. I have tried to read everything I can to protect myself. I don't know if I would have taken as well as you.

Hello, a reader on my blog has just told me about what happened to you, (I had just written a little post in the same area about copyright and blogging and my feelings about it). I am sorry that this happened to you. My blog is much smaller than yours, but even so last year I found someone was taking the photos and the copy and farming it somehow and it is exactly that feeling of being burgled! I am going to put a link to this post at the bottom of my post if that's ok so that other bloggers can learn from your experiences if that is all right with you. Happy Blogging, Joanna

What a lousy thing to do! I wondered why some feeds were short and abbreviated like that. Now I know!! I also know that I do not prefer this! I hope there is a better solution as I love your blog! It won't keep me from reading it though.I your blog in general is easy to ready and the posts aren't too long. Love it all!

I don't so much mind the partial feed. In some respects it's easier as I always click through when I am interested anyway and now I don't scroll through a long post.

Now... if they pulled the content WITHOUT linking to me, I would be upset. However, I have pulled relative content from someone else's site ALWAYS with attribution. Most people are happy to have their content syndicated. If they guy gave you no credit and is simply using your material to sell kitchen equipment then call him on it.

But don't lose any sleep over it, I guess that's my point.

In October of last year, I attended BlogHer Food, and a session with Stephanie Stiavetti and Stephanie Manley. Stephanie Manley told the story of her own site, copykat.com being completely blacklisted from google due to this exact situation. Her income dropped to about 10% of what it was, and it took her 8 months to get relisted with google.

Google is smart enough to know the difference between news sites and blogs. They have different criteria for them. Otherwise, why would Google even bother with a reporting function to report abuse of copyright infringement?

Google wants to be bringing you the best websites on the web, because that keeps them the number one search engine. If when I search google all I'm getting are spammy agregator sites, but Bing gives me real content from real people, which search engine do you think I'll use? That is exactly why they have this in place.

I understand your logic, but you are not correct. It has happened to other bloggers, and it can happen to you if you aren't diligent about protecting your own intellectual property.