I was asked to participate in an interview with Adam Gertler from the Food Network. If you are a Food Network addict like I am, his name may sound familiar to you. Adam competed on season 4 of the Next Food Network Star and was the runner up to Aaron McCargo Jr. Adam then went on to host one season of Will Work for Food.

His latest show, Kid in a Candy Store, debuted this past Monday and is centered around all things sweet {perfect for MBA}. Adam also has another gig called After Party on Food Network’s sister network, Cooking Channel. After Party will be hosted by Adam, Sunny Anderson and Kelsey Nixon and will feature interviews from the eliminated contestant and the show’s judges. After Party starts on July 18th at 11:00 pm on the Cooking Channel. 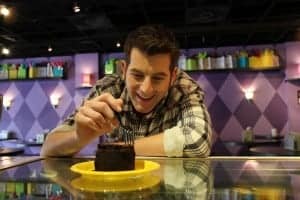 I had a great time on the conference call, Adam was super laid back and eager to answer all of our questions, plus he is pretty adorable! Here is my Q & A with Adam directly from the Food Network transcripts.

MBA: What’s the most unusual sweet you came across in your travels?

Adam: It’s kind of hard to top the vanilla wasabi milkshake at Big Top in Austin, Texas, that was pretty unusual. Big Top is like an old school candy shop and soda fountain, where they’ve got all different syrups and they make everything from scratch, old-fashioned sodas. One of the more modern twists was a wasabi milkshake, and that was just…confusing to me. It wasn’t terrible, but it was just the two flavors that I was like, ‘Am I eating sushi or am I having a milkshake?’ I couldn’t wrap my head around it. That was very unusual, I think.

MBA: What was your favorite childhood memory involving an indulgent sweet treat?

Adam: My mom is a great baker and she always baked, and still does bake. When we were at the Next Food Network Star finale, she brought brownies for the whole crew, which is pretty unusual. My favorite thing that she would make for me was a really classic chocolate pudding pie, with a graham cracker crust and whipped cream on top. That was probably my favorite thing, mixing whipped cream with chocolate pudding and crust – slightly salty, sweet graham cracker crust. Thinking about that now is awesome.

MBA: Do you think that you’ll stick with this kind of show? Or will you eventually transition into a cooking show?

Adam: I would never say no to something like that, to see if I could do it. I definitely feel more comfortable in this kind of show. I love talking to people and I’m kind of curious in general, I just always want to know why. As a child I was very annoying to my parents and brothers, it was always like, Why? Why? Why? I just wanted to know, and ‘Because’ was never a good enough answer. So that curiosity works in this kind of format. A cooking show would be a big challenge, but it would also be a lot fun to do. When I’m cooking, people are like, ‘You know there’s no camera here’. I’m always talking and explaining what I’m doing and I’m very into it. So I’d love to do something like that. I certainly wouldn’t say no to it, but it would be more challenging for me.

Adam’s favorite childhood treat is very similar to mine. It’s funny how sometimes the simplest recipes are the ones we remember most. When I was growing up, my mom was a great cook, but never baked much. However, if you were to ask my brother and I what are favorite dessert was as kids, we would both say my mom’s pistachio pudding pie.

Really, it couldn’t be easier with a store bought graham cracker crust, pistachio pudding and Cool Whip. Although this dessert would take minutes to whip up, it was our favorite and we would easily scarf down the entire pie in one day. I always keep pistachio pudding in my pantry because occasionally I will get a huge craving for this simple dessert.

In honor of Adam’s new show and both of our favorite childhood desserts I decided to replicate the pie Adam mentioned. I ended up making an easy and delicious Chocolate Pudding Pie. I added some Vanilla Fleur De Sel to the graham cracker crust which gave it the perfect sweet and salty balance that I am so fond of. Although I used boxed instant chocolate pudding, you can totally make homemade and use that instead. I then topped each piece with a huge dollop of freshly whipped cream and chocolate shavings. This is truly an old school pie that may just bring back some amazing memories.

So, now I want to know, what’s your favorite childhood dessert?

Remember, you can catch Adam on Kid in a Candy Store which airs Mondays at 8pm/7c and on After Party which premieres July 18th at 11:00 pm on Cooking Channel. 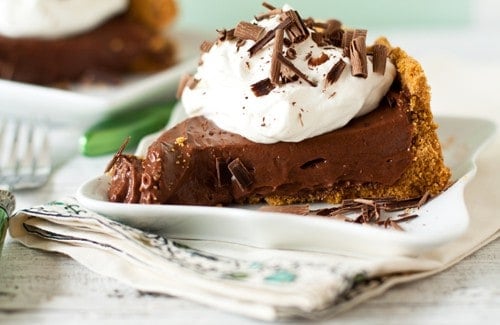 Directions
1. Preheat the oven to 350 degrees F.
2. To make the crust, combine the graham crackers, sugar, and melted butter until moistened. Pour into a 9-inch springform pan. With your hands, press the crumbs into the bottom of the pan and about 1 ½ inches up the sides. Bake for 8 minutes. Cool to room temperature.
3. Prepare pudding according to package directions and pour into the cooled crust. Refrigerate at least one hour to set.
4. Prepare the whipped cream. In a large bowl, whip cream until stiff peaks are just about to form. Beat in vanilla and sugar until peaks form. Make sure not to over-beat. For best results, chill your beaters and bowl prior to preparing.
5. Top pie with whipped cream and chocolate shavings.

I can't wait to make this,I can't eat this do to a bladder medical condition.but my hubby will pig out on this. I may have to sneak a piece with out him looking.i just downloaded this app can't wait to explore it more.he bought me my first kitchenaide artisan mixer for Christmas and I'm baking like crazy and trying new things.will make this soon after the cheese cake is gone lol...

Casey- Thanks for stopping by.

Okay I'm reading this at 6:15 in the morning and now I just might have to make Chocolate Pudding Pie for breakfast! Yum! :-)

Is there a substitute that can be used in place of the vanilla fleur de sel?

Liddy- Thanks for visiting! Sure, just use regular sea salt. -Jamie