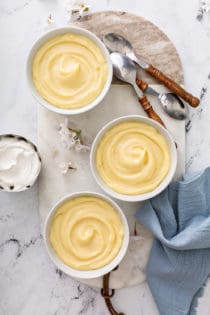 Forget boxed mixes or pre-packaged pudding cups. Making Homemade Vanilla Pudding is as easy as can be and the results are beyond delicious!

When I was a kid and even into my college years, I was a huge fan of pudding cups with a little dollop of Cool Whip or spray of Reddi-Wip. It was the perfect after school snack or simple dessert to keep on hand in a college dorm fridge.

Then I just stopped eating the little snack packs and didn’t purchase them again for like 15 years.

However, one day a package of vanilla and chocolate swirl pudding cups caught Elle’s eye at the grocery store and ended up in our cart – with a can of Reddi-Wip of course. And now my sweet girl loves pudding just like her Mama.

Look, pudding mixes have their place and so do those little cups. I use them in my recipes all the time!

My Doctored Cake Mix wouldn’t be the same without instant pudding mix, and recipes like Eclair Cake and Banana Cream Pie Fluff are so easy because of pudding mixes.

But when I want to indulge in a bowl of pudding? Honestly, homemade pudding is the only way to go.

I love my Homemade Chocolate Pudding with Baileys Irish Cream or even a good butterscotch pudding, but there’s really nothing quite like a bowl of Homemade Vanilla Pudding topped with some fresh berries.

Don’t be freaked out by the idea of making your own custard (because that’s really what pudding is). Making this vanilla pudding recipe is easier than you think – I’ll show you how!

Homemade Vanilla Pudding is made with some staple ingredients:

I recommend using whole milk when making pudding. I find that the texture of the pudding is best with whole milk.

That said, you can use reduced fat milk or even a milk alternative, such as almond milk or coconut milk. Just keep in mind that using an alternative milk will affect the flavor of the pudding slightly.

I like to use both cornstarch and egg yolks in my pudding recipe. Both act as thickeners, but the egg yolks make it super rich while I find that the cornstarch helps to stabilize it a bit. I’ve made puddings without cornstarch in them and they’re a bit more unpredictable.

Think of the cornstarch as pudding insurance.

I also must ask you to please use pure vanilla extract when making your Homemade Vanilla Pudding. You want that real vanilla flavor, not the artificial stuff here!

Sometimes when I want to be really fancy, I’ll use vanilla bean paste in this recipe in place of the extract. There’s just something about those beautiful vanilla bean flecks in the pudding!

HOW TO MAKE VANILLA PUDDING FROM SCRATCH

To make your vanilla pudding, start by whisking together ¼ cup of the milk with the cornstarch. Set this aside.

In a medium saucepan, whisk together the rest of the milk, salt, and sugar. Heat the mixture over medium heat until it is steaming, but don’t let it boil.

Slowly add the now-warmed egg mixture back into the pot, followed by the cornstarch slurry. Continue to cook over medium heat, whisking constantly, until the mixture starts to simmer and has thickened.

Remove the pudding from the heat and whisk in the butter and vanilla.

And that’s it! You’ve made Homemade Vanilla Pudding!

You can serve the pudding warm or let it chill before serving it. If you refrigerate it, be sure to place plastic wrap over it, touching the surface of the pudding, so that a skin does not form on the top.

HOW TO SERVE YOUR HOMEMADE VANILLA PUDDING

Don’t be fooled by what people might have made you think about vanilla – this vanilla pudding is anything but plain.

It’s delicious as-is but even better when topped with a dollop of homemade whipped cream and some fresh berries. Raspberries, blueberries, strawberries, blackberries…whatever is in season and looks best!

This recipe is also an amazing base for homemade banana pudding.

Heck, you could even pour the pudding into popsicle molds for amazing, creamy vanilla pudding popsicles.

I promise that once you make this recipe, you’ll be making it again and again. It’ll absolutely rekindle that childhood love for pudding!

Started with this recipe and was able to adapt to eggnog pudding for a trifle. So simple and delicious!

Made this recipe and won second place in baking contest. The other lady decorated her's real fancy. Judge said mine tasted better but hers looked prettier.

This is a great recipe I did find the sugar level a little bit too high for me is there anyway I can decrease the sugar without affecting the recipe?

I've made this twice (once as a test run and the second for a banana pudding trifle). I can't believe how easy it is to make delicious home made pudding!! Love this recipe. If I wanted to make chocolate pudding, could I use this recipe and add maybe a 1/4c of coco powder to the sauce pan at the beginning? Was wondering if you'd ever tried that.

Hi Kelly – I'm so glad you enjoy this recipe! I haven't attempted turning this one into a chocolate pudding, although I do have another chocolate pudding recipe: https://www.mybakingaddiction.com/chocolate-pudding-recipe/ You can swap the Baileys for more heavy cream if you like. Happy baking! Jamie

Amazing recipe! It taste a lot like confetti cake flavor as well and added some sprinkles for the kids. They loved it!

So glad your family enjoyed the pudding, Monique! Thanks so much for stopping by and sharing your feedback. Happy baking! Jamie