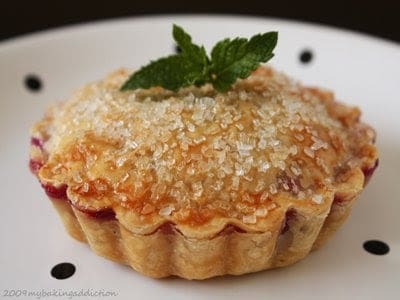 As many of you know, I am self-professed fruit overbuyer/waster. Early last week I had a couple of ripe nectarines and a small amount of raspberries so I decided to turn them into mini pies. Conveniently I also had (1) nine inch Pillsbury pie crust, which allowed me to save some time and cheat a little! I had originally planned on using a couple of peaches; however, after slicing them on the cutting board and snagging a couple to munch on, I realized they tasted like onion peaches! I suspect that one of us put the cutting board away by accident after slicing onions and before washing it. Since those suckers were not a tasty fusion of flavors, I chucked them into trash and opted for the nectarines. These came out very tasty and once cooled popped out of my Williams Sonoma 3 inch tartlettes with ease. The boyfriend enjoyed one with a scoop of vanilla bean ice cream. If ya have some extra fruit in your fridge, throw some together and follow this easy recipe to create a perfect summer treat! 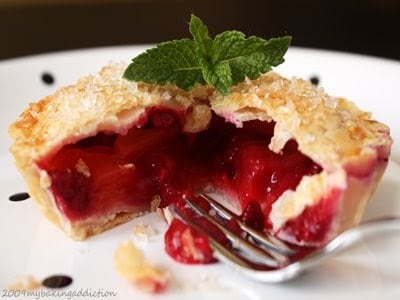 Method
1. Preheat oven to 400 degrees F.
2. Cut (4) circles out of your pie crust according to your pie pan size.
3. Spray your pans with non-stick cooking spray and place the bottom crusts into your pie pans.
4. Gently toss the fruit with sugar and flour. Transfer to pie crusts. Top with remaining crust. Cut vents in top crust, brush lightly with beaten egg and sprinkle with coarse sugar.
5. Bake 30 minutes in the preheated oven, until crust is golden brown.

What adorable little pies! I've made mini pies in cupcake pans, but now I think I need to give this look a go. The shape is just darling.

I love the size of these pies! What a great mini dessert. Try Mini Meringue Pies for another variety.

Love it all! The sugar on top, the great color of the filling. Fantastic!

YUM. I always waste produce...it just goes bad before I can eat it but I despise frozen fruit. This looks amazing and will be perfect to use up the extra fruit I've got in the fridge! Thanks for a great recipe!-Whitney

b is for brown

what a wonderful blog!