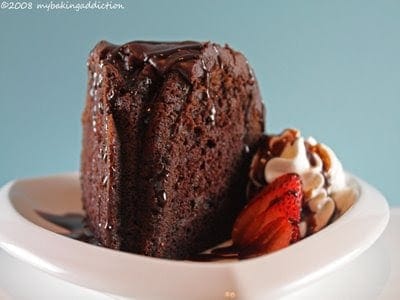 Kugel…what? That is exactly what I said to myself when I spotted this recipe on the TwD site. This was yet another one of Dorie’s desserts that I have never heard of…do I live under a rock or am I lacking the in the area of cultural exploration? Luckily I have google at my at my fingertips…and according to wikipedia:

After I took a minute to enlighten myself on this cake/bread, I felt a little more confident about preparing it, but honestly, I was not feeling this one. I decided to sit this week’s recipe out, but still wanted to make something in a bundt pan. While pondering the notion of bundt cakes, I remembered a chocolate cake recipe that I had added to my allrecipes recipe box. This recipe was for an easy chocolate cake that used a box mix, but was doctored up with other ingredients. I was very very happy with this recipe even though it was not from scratch! The cake turned out very well and remained super moist for days…the glaze made it extra delicious! It does not get any easier than this!

Now if you want to check out the actual recipe, head on over to Landa’s blog, The All Purpose Girl. You can also go to the Tuesdays with Dorie site to visit the blogroll! 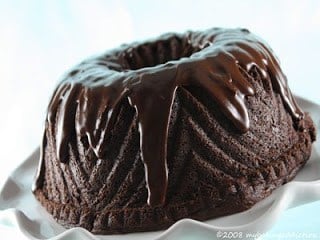 Up next…Pumpkin Bread and Oh Nuts!

Wow - awesome chocolate cake! I use that chocolate glaze from allrecipes, all the time. It's fabulous!

The cake looks fantastic!! I am sure chocolate was the right way to go!

Looks so rich and chocolatey and delicious. Very nice blog. I enjoyed my visit.

I'm a 20 something writer and a wanna be cook! I just wanted to say hello! It looks great to me, even if it's not kugelhopf!

Ha I wasn't feeling this one either--your cake looks great though!