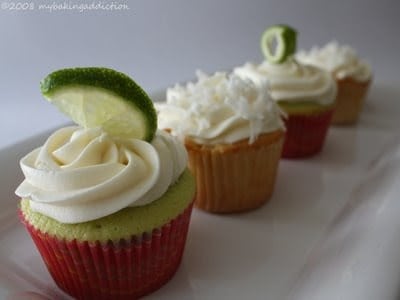 With fall quickly approaching, I have had the desire to start making things like pumpkin rolls, apple pie and carrot cake. However, I decided to fight the urge a little while longer and make some summer inspired cupcakes. I saw a recipe for Key Lime Cupcakes on the Bon Appétit website and knew I had to make them. These whipped together in a snap and came out very cute..in a lime green kind of way. At first I was against coloring the batter, but then thought what the hell and went through with it. I thought the pink striped cupcake liners were the perfect accompaniment to these green beauties. The texture of the cake was nice and the awesome Key Lime flavor was a truly delicious! I also wanted to try making some Pina Colade-esque cupcakes so I followed the Ina Garten recipe I posted about here and made a few modifications.
Here is what I did:

This made for a very moist and scrumptious cupcake, I had to let them cool in the cupcake tin for a little over 25 minutes before putting them on a cooling rack, the centers dipped in a bit, but that was easily covered by the cream cheese frosting! All in all, both recipes were thoroughly enjoyed by those who ate them…
Embrace summer…it’s almost gone!
Enjoy! 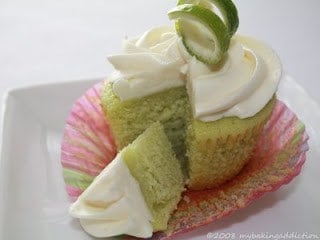 I love your design of your blog and your key lime cupcakes look amazing!

I love the color of the cake.Oh, and it doesn't look like your a wannabe photographer, your pictures look totally professional. :)

Those cupcakes look so pretty and the flavors are so fun.

These Key Lime Cupcakes are absolutely adorable, but the Pina Colada ones sound outta sight! Grat summer ideas. I'm not ready for the end of summer yet.