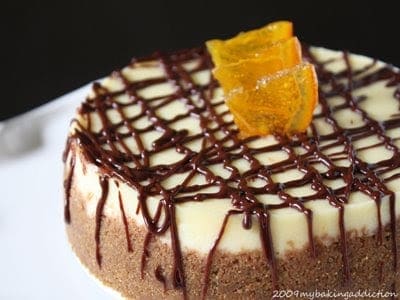 I cannot believe that April is almost over which means it’s time for this month’s Daring Bakers reveal. The April 2009 challenge is hosted by Jenny from Jenny Bakes. She has chosen Abbey’s Infamous Cheesecake as the challenge. If you ever browse my blog, you know this dessert is quite popular in my house. Jenny wanted us to use our creativity, so flavoring the cheesecake was entirely up to us. I have made many different cheesecakes, but always return to the same couple of recipes just making variations as needed. Typically I use a recipe that calls for sour cream; however, the Daring Bakers recipe includes heavy cream and has no sour cream whatsoever. I looked through my previous cheesecake posts and realized that I have never made an orange cheesecake, plus I figured this citrus flavor would keep the boyfriend from eating the entire thing in one sitting. I cut the recipe in half and used one 6inch springform pan, the cheesecake baked in this pan for 40 minutes. 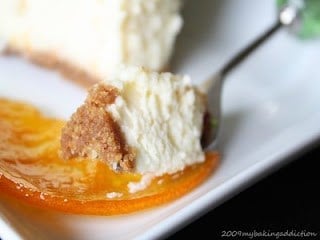 When I make cheesecakes I always try to use a waterbath; however, I have had issues with water seeping into my foil wrapped pan. This seepage has really pissed me off on a couple of occasions, so I decided to remedy the issue by placing the foil wrapped cheesecake pan in an oven bag before placing it into the water. I have also used crock pot liners and they worked just as well. I also let the cheesecake completely cool in the oven, this really seems to help with the cracks; I freaking despise cracks! Well that is my helpful hint of the day so now let’s talk orange cheesecake. 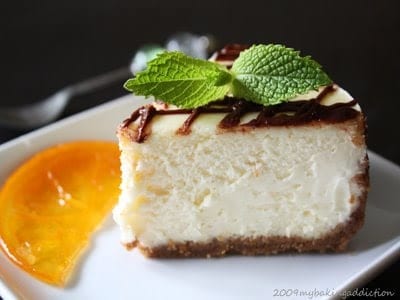 Here are my adjustments:
1.) I cut the recipe in half and used a 6 inch springform pan which I lightly sprayed with non-stick cooking spray.
2.) I added the zest from 1/2 an orange.
3.) I added 1/8 teaspoon of pure orange extract.
4.) I cooled the cheesecake in the oven for over 5 hours.
5.) I drizzled a chocolate glaze over the cooled cheesecake.
6.) I added candied orange slices for garnish using this recipe. 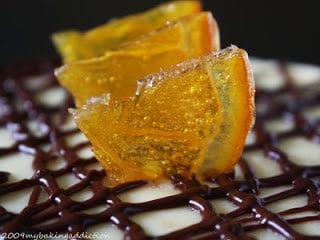 2. Mix together the crust ingredients and press into your preferred pan. You can press the crust just into the bottom, or up the sides of the pan too – baker’s choice. Set crust aside.

3. Combine cream cheese and sugar in the bowl of a stand-mixer (or in a large bowl if using a hand-mixer) and cream together until smooth. Add eggs, one at a time, fully incorporating each before adding the next. Make sure to scrape down the bowl in between each egg. Add heavy cream, vanilla, lemon juice, and alcohol and blend until smooth and creamy.

4. Pour batter into prepared crust and tap the pan on the counter a few times to bring all air bubbles to the surface. Place pan into a larger pan and pour boiling water into the larger pan until halfway up the side of the cheesecake pan. If cheesecake pan is not airtight, cover bottom securely with foil before adding water.

5. Bake 45 to 55 minutes, until it is almost done – this can be hard to judge, but you’re looking for the cake to hold together, but still have a lot of jiggle to it in the center. You don’t want it to be completely firm at this stage. Close the oven door, turn the heat off, and let rest in the cooling oven for one hour. This lets the cake finish cooking and cool down gently enough so that it won’t crack on the top. After one hour, remove cheesecake from oven and lift carefully out of water bath. Let it finish cooling on the counter, and then cover and put in the fridge to chill. Once fully chilled, it is ready to serve.

Pan note: The creator of this recipe used to use a springform pan, but no matter how well she wrapped the thing in tin foil, water would always seep in and make the crust soggy. Now she uses one of those 1-use foil “casserole” shaped pans from the grocery store. They’re 8 or 9 inches wide and really deep, and best of all, water-tight. When it comes time to serve, just cut the foil away.

Prep notes: While the actual making of this cheesecake is a minimal time commitment, it does need to bake for almost an hour, cool in the oven for an hour, and chill overnight before it is served. Please plan accordingly!

My thoughts: I think this cheesecake is really delicious, the heavy cream imparts a fluffier texture than the recipe I normally use. I will definitely bake this one again and may even chuck my previous recipe!

I realize this is an old post, but, when you said ou cut the recipe in half, what did you do with the eggs, since there are 3? Thnx, looks awesome!

Hi, Cindy! Just use two eggs. I hope you like it!

OMG This looks fantastic! I really want to make this.

I have two really basic questions - 1) Do you use the whisk attachment or the paddle attachment in the stand mixer for this? 2) What kind of Sugar do you use for this?

Fatima- Hello. I use the paddle attachment and granulated white sugar. I hope this helps - happy baking. -Jamie

What kind of liquor did you add to your cheesecake batter.

lol wow your boyfriend sounds a lot like my boyfriend. haha unfortunetly my boyrfriend does not have an aversion to citrus...or anything else for that matter, therefore he will still eat this entire cheesecake which is why i will be making mine to fit a 10 in. springform! thanks for the recipe!