Gluten-free mini cherry pies have an oatmeal cookie-like crust and are ideal for picnics and parties!

When I started planning these mini cherry pies, I immediately thought of mini lattice-topped pies. I marvel at how cute they are and despite wanting to try myself, I’ve always hesitated, knowing that there’s no way my pies would come out looking as picture perfect as I’d like. So the lattice tops were out! I was also thinking gluten-free buttery and flaky pie dough may be a bit more finicky than I was in the mood for. I’m all about making things as fuss-free as possible so I just bypassed all of that with a streusel-like crust and topping very similar to the one I used in these gluten-free pumpkin pie streusel bars.

It seems like fresh sour cherries are hard to come by in my area and I’ve never been one for canned cherry pie filling, so I used fresh sweet cherries in these mini pies. The filling is only baked for 16 minutes, so while the cherries are quite tender, they don’t break down into a jammy type of filling. I was pretty disappointed when I saw that after taking the first batch out of the oven but after eating my first (and second and third) pie, I didn’t care! 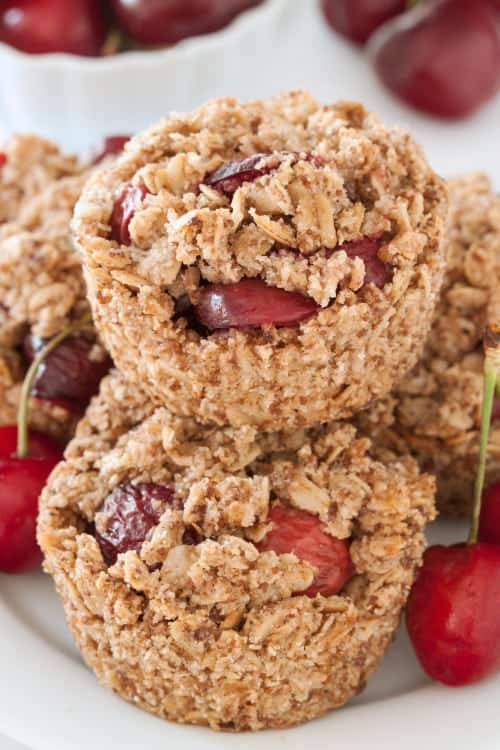 Often when I post a gluten-free recipe, people ask for a dairy-free alternative. So I made these gluten-free mini cherry pies dairy-free right off the bat! Instead of butter, I used coconut oil and because of that one simple change, they’re also naturally vegan.

And since I knew people would ask, I also tried these with butter. Butter usually contains around 80% fat, whereas coconut oil is 100% fat. I frequently use them interchangeably but in crusts and streusel-like goodies, some experimenting is usually required to figure out the correct amount to sub for one another. At first, I added an additional tablespoon of butter to compensate for the lower fat content. That didn’t work. Then I added another tablespoon which didn’t work, either! The pies kept sticking to the liners. After several more attempts at a butter version, I decided that you all will just have to get some coconut oil if you don’t already have some. ;)

I brought these mini pies to a picnic and was worried that they may not hold up well, but they did so wonderfully and even made a 20-minute bumpy bike ride without issue! I refrigerated them for a few hours before the picnic, which helped firm them up even more and made them less prone to crumbling.

I’ve already tried a blueberry version and they were so good that I’m convinced I need to try more! What’s your favorite type of pie? 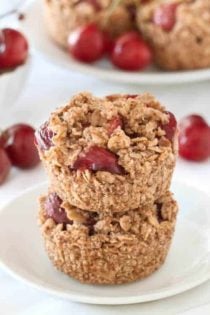 Note: If you need these to be gluten-free, make sure all your products are certified gluten-free.

1. Preheat the oven to 375 degrees F. Line a muffin pan with 12 muffin liners. I recommend using foil or regular paper liners. These pies stuck to the bottom of my glassine baking cups.

2. In a medium mixing bowl, stir together the oat flour, oats, cinnamon, brown sugar and salt. Stir in the melted coconut oil until well combined.

3. Pat about 3 tablespoons (40 grams) of the crust mixture up the sides and on the bottom of each muffin liner.

4. Bake for 8-10 minutes or just until they start browning.

5. Remove from the oven and cool for 10 minutes while preparing the filling.

6. In a medium mixing bowl, stir together all the filling ingredients. Spoon a little over 2 tablespoons of mixture over each pre-baked crust and top with the remaining oat mixture (about 1 tablespoon per pie).

7. Bake for another 14-16 minutes or until the topping has lightly browned.

8. Remove from the oven and let cool for about 10-15 minutes or until cool enough to handle. Use a knife to carefully remove the pies from the molds and then remove the paper wrappers. If you have difficulties getting them out of their wrappers because the pies are too soft, let them cool slightly and then place in the refrigerator for about 10-20 minutes. If you don't remove the wrappers now, the pies may or may not stick to them once cool (it depends on the wrappers you use).

* To make oat flour, grind rolled or quick oats in a coffee grinder or a small food processor until powdery.
** If you use unrefined rather than refined coconut oil, these pies may have some coconut taste to them.

I am allergic to coconut. Coukt I sub dairy free butter for the coconut oil?

Hello! I haven't attempted this recipe with this substitution, so I am not sure of the result. If you happen to give it a try, I'd love to know how they turned out. Thanks so much for stopping by. -Jamie

I tried to reply to your comment a few days ago but I'm sorry to say that the internet isn't as reliable as my 50 year old gas oven!

These recipes look delicious and many thanks for sending them: We run four horticultural therapy group sessions, Monday to Thursday, every week; so in total four communal meals each week (all cooked on camping stoves/open fire) which I'm trying to improve by encouraging volunteers and staff bring in cake and pie....

Each of the groups have different dietary requirements so the vegetarian/gluten free recipes should suite most groups: I'll let you know how well they're received (the Cherry pies went down very well)!

I apologise for assuming that you lived in America. The weather in the UK is, yes you guessed it; wet :( I would have preferred a cold and sunny Winter :)

Hi Spike! No apologies needed. This is an American blog, after all. :) I hope your colleagues will enjoy the recipes! And I'm right there with you on preferring a cold and sunny winter. :)

Many thanks for your kind comments - please come and join us for a meal if you have the opportunity of visiting England!

These recipes look great and I'm sure my oven will be busy over the next few weeks! I'm assuming that I can substitute coconut oil for butter? Can you suggest how can I replace the eggs (the cakes/pies need to be vegan) please?

P.S. I hope you're ok? The weather forecast for parts of America didn't look great! Spike

Thanks for your kind offer! :) Coconut oil isn't always interchangeable with butter but I've tested it in the recipes I listed and it works fine. But I didn't realize the recipes needed to be vegan, too! So only the crumble would work in that case. Actually, you can use brown rice syrup instead of honey in the granola to make it vegan. You could also take a look at my vegan recipes here (My Baking Addiction isn't my blog - I'm just the gluten-free contributor here). A bunch of those recipes fit your needs, I think! I'm from the US but currently live in Germany and weather-wise, things are okay here. I could do with some more sun, though. ;)

Just to say a huge THANK YOU I work for a horticultural therapy charity; SAGE Greenfingers, in Sheffield England. I made these pies as a birthday treat for one of our volunteers and we shared them amongst the group at meal time; we all get together each lunchtime and share a communal meal made with produce from our allotments. We also enjoy cake and pies very much!

I had to ensure the pies were gluten, diary, nut and soya free and these did the job perfectly (I omitted the Almond essence)! Do you have any other recipes I might be able to use? You have some serious fans in England!

All the best Spike

I'm thrilled that you enjoyed the pies so much! And how awesome that you all have a communal meal together. :) Here are some recipes that fit that description (just be sure to use coconut oil and dairy-free chocolate chips) - raspberry lava cakes, granola, strawberry rhubarb crumble, and mint chocolate chip brownies (you can easily omit the mint for regular brownies). I hope that helps and thanks a ton for your feedback!

I used 1 1/4 cups pumpkin purée, 2 lrg eggs, 1/2 cup honey, 1/2 tsp each of cinnamon and nutmeg, 1/4 tsp ginger, pinch of salt, 1/2 tsp vanilla and 1/4 cup coconut milk-combine well. I baked your crust initially for 6 minutes, added the pumpkin filling and baked for 10 mins, added the crumble topping then baked an additional 15 mins. They were great! Oh I also used coconut sugar in your crust recipe :)

Oh, wow. That's super helpful and will save me a ton of time experimenting! They sound fantastic and I love that you used honey, coconut milk and coconut sugar. Thank you so much for sharing. :) I can't wait to try your version!