These super decadent gluten-free lava cakes have a raspberry center and make just enough for two!

My husband and I don’t really do anything special for Valentine’s Day but I always use it as an excuse to make something a little more sinful than I’d normally make – like these raspberry lava molten cakes! I had previously made these molten lava cakes for two with whole wheat flour but wanted to make a gluten-free version to share today. It was a surprisingly easy adaption to make – I just used buckwheat flour. So simple!

Like I mentioned in my gluten-free mint chocolate chip brownies post, buckwheat tastes pretty funky but once cocoa powder comes into play, you absolutely can’t taste it. I really doubt anyone would be able to tell the difference between these gluten-free molten lava cakes and a version made with all-purpose flour. 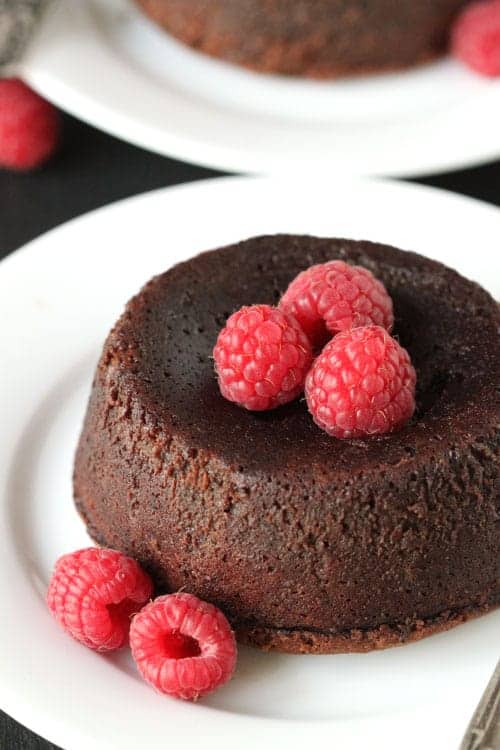 You can’t really see by the pictures, but there’s just as much chocolate lava as there is raspberry filling. I must have cut into the cake at a very raspberry-filled point because there’s only 1 1/2 tablespoons of raspberry filling per cake. It doesn’t sound like much but I thought it was the perfect amount!

These are extremely rich and you may even want to split one if you’re actually eating this for dessert after a meal and not as your entire breakfast (whoops). If you need more than two, you can easily double the recipe. If you’re having a bigger dinner party, try Jamie’s flourless chocolate cakes. They’re also gluten-free and would be perfect for Valentine’s Day!

Halving the recipe, on the other hand, isn’t as simple. I do a lot of small batch baking and half an egg yolk just isn’t something I like dealing with. If you only want one lava cake, I suggest making the full batch, which is only two, and then freezing the other one. You can save it for a bad day or if you’re like me, come across it 3 months later and squeal with joy over your forgotten lava cake. They can also be refrigerated for a few days. Once refrigerated, they’re like straight up fudge, but you can microwave them at half power for 10 seconds to get them back to the more lava-like state. 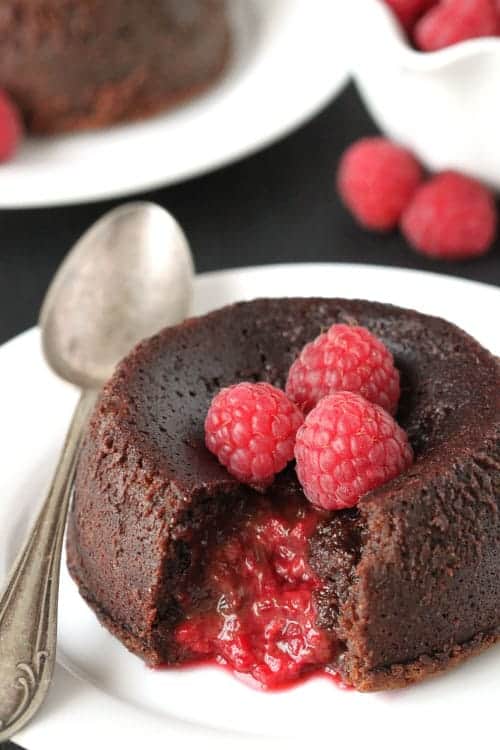 I’ve seen raspberry molten lava cake recipes that call for coating the raspberries in raspberry jam, but I think in combination with the rich, chocolatey cake, the raspberry filling is perfect as is. If raspberries aren’t your thing, you can leave them out and bake the lava cakes a minute or two less.

No matter how you spend Valentine’s Day, I think these raspberry molten lava cakes would be a great addition. You just can’t go wrong with oozing raspberry and chocolate sauce!

2. In a medium bowl, mix together the sugar, egg, egg yolk, vanilla and salt. Set aside.

3. Melt the chocolate and butter in the microwave at half power, in 30 second increments, until melted. Stir after every increment.

4. Add the chocolate mixture to the sugar mixture and stir just until combined.

5. Sprinkle the flour over the batter and fold in. Do not over mix! Your cakes will be tough if you do. Only fold in until no more flour streaks remain. The batter will be quite sticky and almost as thick as brownie batter.

6. Scoop a little more than 1/4 of the batter into each of the prepared ramekins.

7. Put 1/2 of the mashed raspberries into the center of each cake, taking care to keep it in the center (and not spread out) as much as possible.

8. Divide the remaining batter between the two ramekins.

9. Bake for 15 minutes. The surface shouldn't be wet. If it is, keep the cakes in for another minute or two until the middle is no longer wet. The toothpick test does not work here.

10. Remove the cakes from the oven and cool for 15 minutes in the ramekins.

11. Run a knife around the edge of the cakes and flip out onto the serving plates.

12. Serve immediately. Leftovers can be covered and refrigerated for up to 2 days. Reheat in the microwave at half power for 10-15 seconds or until warm enough for your liking.

Hi there This recipe looks amazing.  Can these be frozen?

Thanks! I haven't tried it but I think they'd freeze well. Reheat at half power in the microwave. Enjoy!

Hi, I love your recipe and thank you for it, Erin. Do you think these little lava cakes could be made, cooled and then frozen, ready for use on another day? To take the worry out of a dinner party, they could be taken out and reheated, thawed and microwaved or oven warmed...? Sue

Hi, Susan! I'm so happy to hear that you like the recipe. :) I haven't frozen these but I have refrigerated them and then microwaved them to reheat them. Reheating them very gently worked well and they seemed just as good as fresh from the oven. Although I haven't tried it, I don't see why freezing wouldn't work. I would completely thaw them and then microwave. Good luck and thanks for the good question!

I haven't tried it but I'm assuming not. I'm pretty sure a gluten-free all-purpose baking mix work work or if you don't need it to be gluten-free, I know that whole wheat flour works.

I bet the buckwheat flour makes these cakes so flavorful! The raspberry filling in these cakes is so beautiful! I'll gladly eat your extra lava cake any day;)

Thanks, Sarah! And you can't taste the buckwheat at all in these cakes - just yummy chocolate goodness. Next time I make them, you can totally have the second cake. ;)

Allison @ Wine and the Wooden Spoon

Yum! I've never seen a lava cake with anything but chocolate in the middle. The raspberry would be an amazing addition!