I’ve mentioned numerous times that I am not much of drinker. After about an ounce of liquor, I get all flushed and start talking way too much. However, even though I’m not a huge fan of getting my drink on – my friends are.

My BFF, Brittani turns 35 tomorrow, so I teamed up with a group of friends to throw her a surprise party last weekend. At some point during the party planning, someone mentioned pudding shots, but the task was never really delegated to anyone in particular. And since I’m a crazy overachiever, I decided to add them to my party to-do list on top of Greek Pasta Salad, Peanut Butter Cup Cupcakes, and Queso Blanco.

While strolling through Kroger, I came across mini, plastic shot glasses and spoons in the paper plate aisle. I’ve only had pudding/jello shots a couple of times since I typically refrain from awkward eating situations that force you to use your mouth to remove jiggly things from little cups, so I thought the spoons were quite genius! 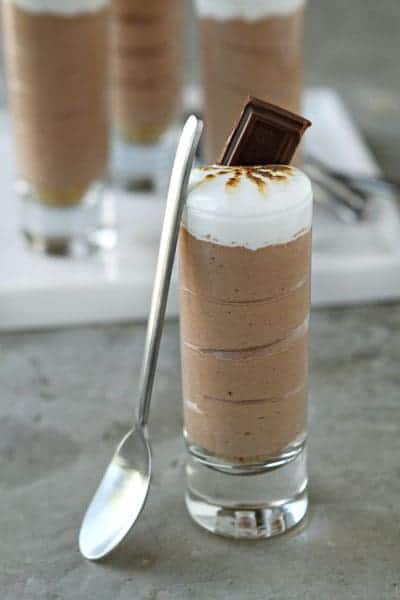 When thinking of flavor combinations, I thought S’mores Pudding Shots would be perfect for our casual, outdoor party – plus, I had half a bottle of Fluffed Marshmallow Vodka that we haven’t touched since I made S’mores Truffles.

Pudding shots couldn’t be easier and they can be dressed up as seen in the photographs, or simply piped into mini plastic cups for a casual backyard barbeque. Chocolate pudding mix combines with milk, Fluffed Marshmallow Vodka and Cool Whip to create a fun, simple and boozy sweet treat that’s sure to be the hit at any party.

Regardless of how you serve this adult spin on the campfire classic, make sure you let your guests know that they contain alcohol – because they’re so incredibly delicious one could easily overindulge. 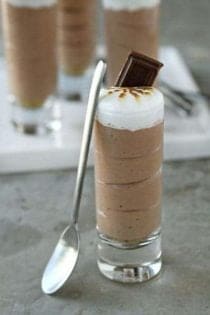 Do you have to freeze them or just refrigerate? Thank you for the recipe!

Hello! I would store them in the refrigerator if you make them ahead of time. Hope this helps! Happy baking. Jamie

The marshmallow fluffed vodka seems to be discontinued. Would the whipped vodka work?

Kim- I think that would be totally fine. Even vanilla vodka would work.I hope you enjoy them. -Jamie

Jamie, these shots look phenomenal. They're perfect for my 6 months pregnant self who can't indulge in the "other" kind of shots at the moment. Love how super simple the recipe is but how fancy the final product looks. I might give it a try at my son's upcoming birthday party. Sharing all around. Thanks so much for the recipe!

Jelli- I hope you do get the chance to try them. Thanks so much for stopping by.

Can sugar free pudding be used in this

Hi Betty, You could substitute sugar-free pudding. Thanks for stopping by.

I made these and they were AWESOME!!! I made them in my long, stemless wine glasses. I added a little more graham cracker crumbs between the layers of chocolate pudding. My husband put the final touch on the marshmellow fluff with his favorite kitchen toy...the torch!!! Thanks for sharing!!!

It sounds like you went all out with them! I'm thrilled that you loved the recipe. Thank you so much for stopping in to share and have a wonderful day!