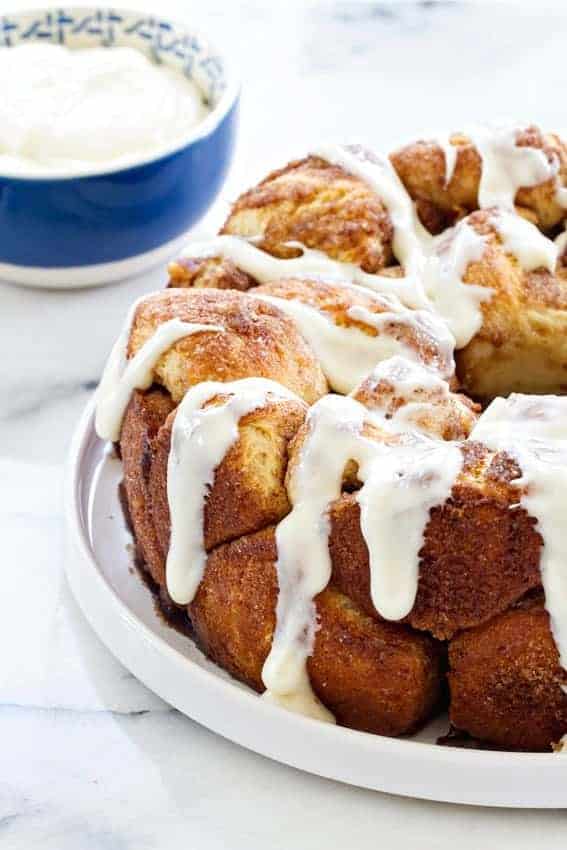 Beginner’s Cinnamon Pull-Apart Bread is just the sort of coffee cake to beat your yeast phobia. It’s so simple, you can make it with the kiddos in an afternoon!

I’m not really one that goes in for resolutions, at the start of the year, or any other time. It’s not that I have a problem with folks that do, I just know myself. Change of lifestyle can’t be sudden, full-stop, and forced. I’ve got to ease into it.

Over the last year, I’ve tackled lots of things I never thought I would. I got a spin cycle for my house, and I use it all the time. After becoming somewhat of a hermit pretty much immediately after I left my teaching job to work on MBA full time, now I force myself to get out of the house nearly every day – either for activities with Elle, or my sacred, solitary Target run. All stay-at-home parents need trips like that, amiright?! 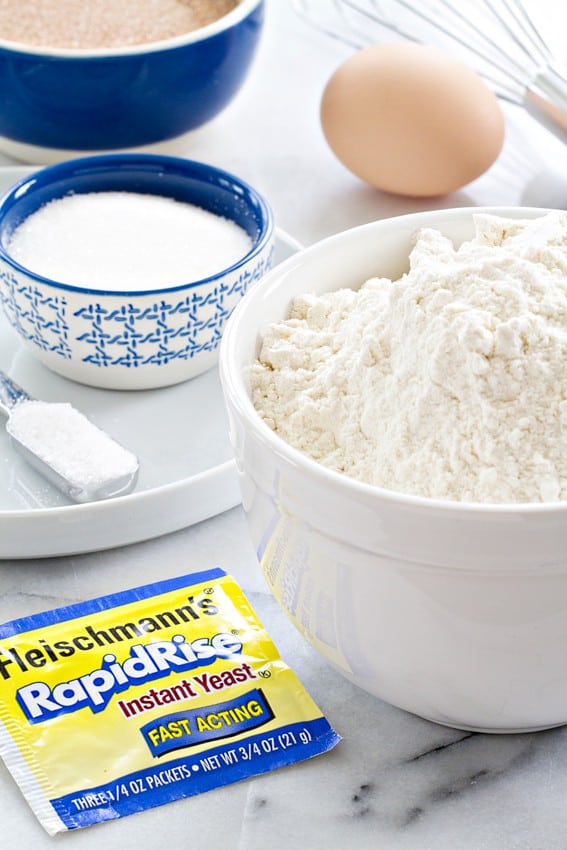 And one of the things I’m most proud of in 2015 is tackling my fear of yeast baking. I’ve made Caramel Apple Cinnamon Rolls and Potato Rolls, and Honey Nut Rolls with ease. When you’re working with quality products like Fleischmann’s® RapidRise™ Yeast that’s ready to rock every time you tear open the package, it’s pretty easy to get over your fears.

And I want the same for you in 2016. So we’re easing into it. With delicious, delectable Beginner’s Cinnamon Pecan Pull-Apart Bread.

Everyone’s had Pull-Apart Bread (sometimes it’s called Monkey Bread) at some point. And there are a thousand variations – even savory garlic and cheese ones. But I’m a sucker for the original recipe, so that’s what we’re making here. Except that I wanted a deeper, more earthy flavor from this Fleischmann’s® recipe, so I switched it up a little to add some brown sugar, pecans and a drizzle of sweet cream cheese frosting. How could anyone possibly resist this combination? 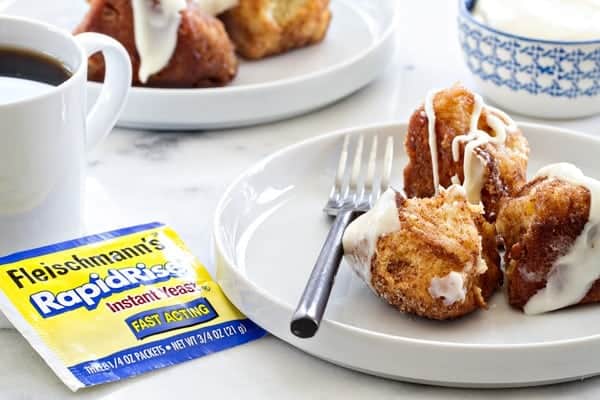 This is one of those baked treats that’s suitable for breakfast, over coffee, or at 3 o’clock in the afternoon, when you’re desperate for a pick-me-up to get you through dinner with your cup of tea. What’s really wonderful is that you can make the dough ahead of time. If you’re having a big brunch? Make this Pull-Apart bread dough the night before. You’ll be ready to go first thing in the morning, and get to hit the snooze button at least once before guests arrive. And if you Bake a little extra, you can send your guests home with a few pieces to enjoy later.

Now, I know a lot of recipes for Monkey Bread call for those tubes of biscuit dough. I’m no stranger to a shortcut, and I won’t say you should never do that. But I’m asking you to make fresh, homemade dough for this cake at least once in your life. The flavors are SO much better! There’s a deeper, yeasty deliciousness that just can’t be matched by that tube full of shortcuts. Especially given this dough is incredibly easy to make. 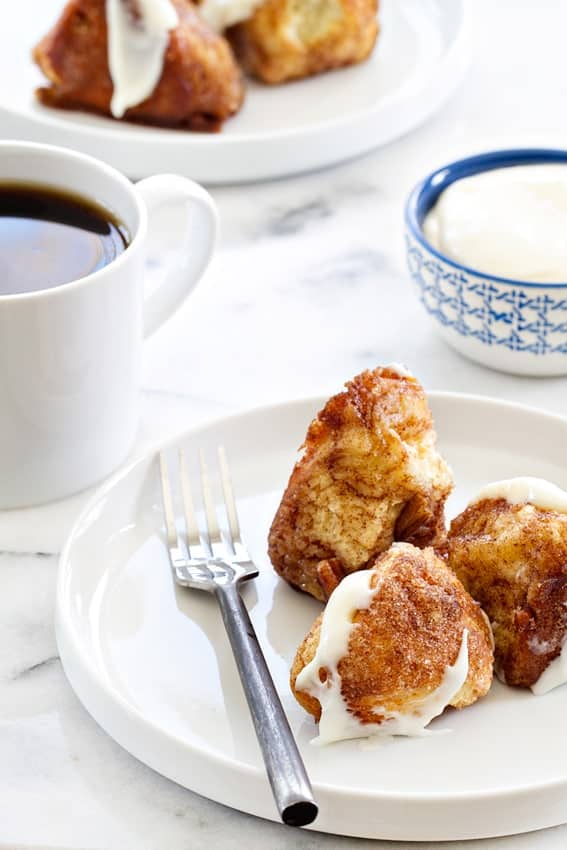 I whipped up this gorgeous Beginner’s Cinnamon Pecan Pull-Apart Bread early one morning with my baby girl. Her daddy was still fast asleep, so we got to work in the kitchen bright and early. It really is easy enough that a toddler can do it. By the time Eric climbed out of bed, this coffee cake was bubbling up in our oven, the heavenly scents wafting through our entire house. I like to remind the man why he married me, is what I’m saying.

But also, baking up breakfast like that for my sweet family is something that brings me great joy. Creating a scrumptious breakfast from nothing but flour, water, yeast, sugar, and butter is straight up magical in my eyes. If you love baking as much as I do, I’m sure you feel the same. You’ve got to try this Beginner’s Cinnamon Pecan Pull-Apart Bread – whether you’re just starting out, or a seasoned baker, you’re going to love it! 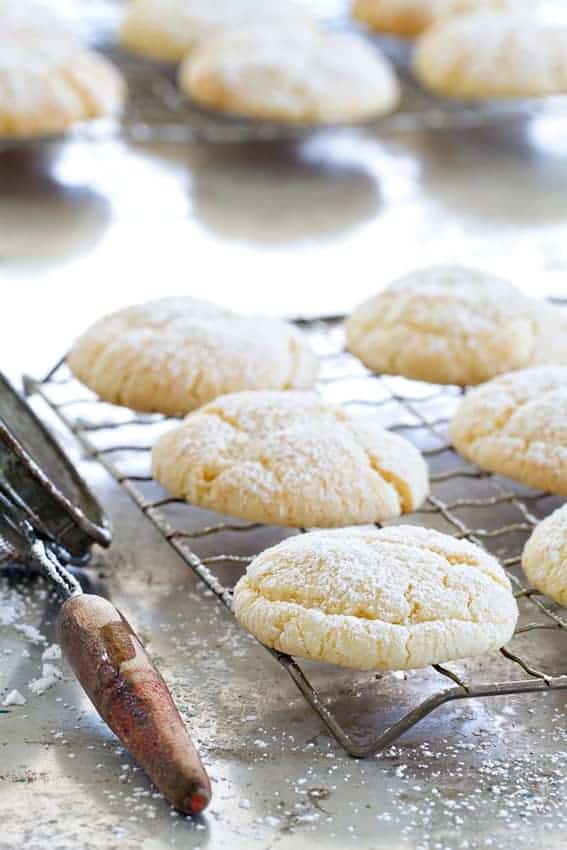 This is by far one of the best recipes I have ever come across! Thank you so much!

So happy to hear you enjoyed the bread, Pooja! Thanks so much for stopping by and leaving your feedback! -Jamie

Accidentally gave them an overnight rise cause I fell asleep while making them, and let me TELL YOU, they were absolutely amazing. Better than anything I could have ever bought in the store. Just beautiful and delicious

So happy to hear you enjoyed the bread, Shanoya! Thanks so much for stopping by and leaving your feedback! -Jamie

So happy to hear you enjoyed the bread! Thanks so much for stopping by and leaving your feedback! -Jamie

I hope you enjoy it, Maricela!

I've made it and it was amazing. I've made it ahead and I let it rise overnight covered with a clean towel inside the (cold) oven. Kid's loved it! Thanks for the recipe!

You are so welcome! I'm glad your children enjoyed it!