{Hey MBA Friends! I’m participating in a little photo contest for Le Creuset! If you’re on Pinterest, I’d love for you to head over and “like” my photo (if it’s your fave). If I win the contest, I’ll be giving away some pretty fantastic prizes! If you’ve already checked it out and “liked” the photo, thanks so much! The contest ends at the end of the month!}

Last week I was strolling through Walmart, which happens to be one of my least favorite stores on the planet. The dim lighting and lack of decent produce coupled with a maximum of 3 open lanes stacked 10 people deep is enough to make me stay away – forever. However, I was on a mission to find a specific item for a cupcake idea.

A mission that was fully provoked by Amber, who led me on a wild goose chase via the phone. After asking several employees and Amber’s diligent Googling from New Jersey, I still came up empty handed. It appears that we Ohioans are a little late to the Orange Creamsicle Oreo scene. 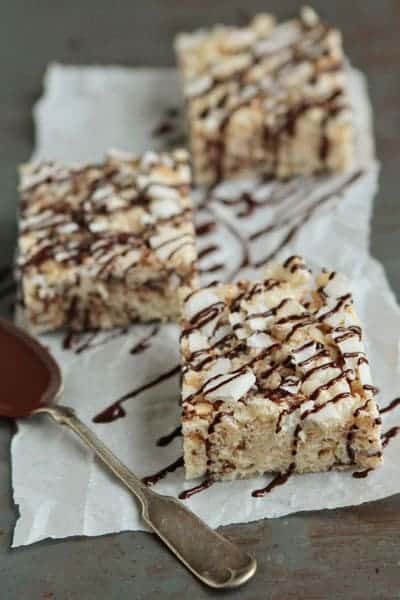 Instead of fleeing at that moment, I decided to do what any baker would do, I went to assess their baking aisle where I stumbled upon a lonely bag of Toasted Coconut Marshmallows. Being that I love coconut, especially of the toasted variety, and marshmallows, I immediately snatched them up along with a giant box of Kellogg’s Rice Krispies. Hello, Toasted Marshmallow Rice Krispie Treats!

I wanted to love these marshmallows – I really did. However, I can only equate the experience to eating a marshmallow that’s been coated in coconut flavored sand. Not the best mouth feel in the world and sandy Rice Krispie Treats sound less than delicious. Lucky for me, I had a full bag of plain miniature marshmallows stashed away in the pantry, so I created my own version of Toasted Coconut Rice Krispie Treats and added a little chocolate into the mix just to kick things up a notch.

The result? Oooey, gooey crispy marshmallow goodness enhanced by the subtle flavor of coconut and flecks of chocolate. A definite win and totally worth waiting 15 minutes in line at Walmart for the inspiration.

2. In large saucepan melt butter over low heat. Add marshmallows and stir until completely melted. Remove from heat and stir in coconut extract.

- Chocolate-Coconut Rice Krispie Treats are best if served the same day they are made.

- To Toast Coconut: Preheat oven to 350 F. Spread shredded, flaked, or shaved coconut on a rimmed baking sheet. Bake in preheated oven, stirring often, until golden brown - about 5 to 10 minutes.

- I drizzled my bars with melted chocolate before serving.

Why are we reserving the 3/4 c marshmallows? Has anyone used the coconut oil in place of butter? I will be making this for our church senior banquet. Hope it works!

Susan- You add the reserved marshmallows in with the chocolate chips, just for a little more texture in the treats. I have not tried these with coconut oil but let me know how they turn out if you try it. Thanks for visiting.

I have always been a HUGE fan of RKT's, but these were seriously delicious! Only problem I had was getting the chocolate chips to mix in well and stick. Next time I make these I will try mixing the chocolate with the melted marshmellows first. Thanks for the amazing recipe!

One childhood treat I still love is Rice Krispie Treats; with chocolate and coconut? Help.

I'm actually doing a RK treat soon; friend sent me an AMAZING thing on a stick from a local store in my hometown of St. Louis...now I have to figure out how to make it so there will be no more overnight shipping to the tune of $28. Not kidding.

Jamie, I went to vote for your Le Creuset photo and see that the contest has closed (I'm a little behind on emails!). I have to say, though, I think that your photo was the best composed and most beautiful. I just loved the blue and yellow against the beautiful wood grains. I absolutely love your blog (and see that you're from Ohio, too!)

The wow factor on these treats are at a full 10!