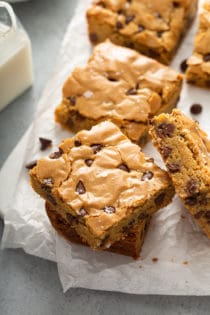 These Chocolate Chip Blondies are rich, chewy, and come together in just a few minutes. You will definitely want to make these over and over again!

Right now I’m pretty much all about simple recipes that I can whip up on a whim with Elle since it is officially summer break.

She definitely goes in phases with wanting to be in the kitchen with me while I test recipes. And lately she’s all about doing everything all by herself.

These simple Chocolate Chip Blondies are absolutely perfect for kiddos to help out with, or even make on their own if they’re a bit older. The come together quickly with common pantry ingredients and pretty darn delicious!

WHAT IS A BLONDIE?

Before we get into this recipe, let’s talk about blondies.

Blondies are bar desserts, just like brownies. But instead of being flavored with chocolate, they are flavored with vanilla. They also contain brown sugar, which helps make them chewy.

And just like brownies, blondies can be flavored in all sorts of ways! Just like how I’ve made Salted Caramel Brownies, Pumpkin Brownies, and Tiramisu Brownies, I’ve also made Pumpkin Blondies, Snickerdoodle Blondies, and Maple Walnut Blondies.

And now these Chocolate Chip Blondies. Don’t worry I’ve got some more variations up my sleeve, but first we’ve gotta talk about this one.

Most of the recipes I make for this site I end up testing a couple of times to get them right. Sometimes I need to test them 3 times.

But this blondie recipe might go in the books as the recipe I tested the most to get it perfect, alongside my tiramisu recipe.

I really wanted to get this recipe just right. I wanted them to be perfectly chewy and wanted to nail down the baking time so they wouldn’t be overbaked.

After all, no one likes an overbaked blondie.

All of the testing paid off, though. These are my absolute favorite blondies and I can’t wait to make some more flavors using this recipe base.

HOW TO MAKE THESE CHOCOLATE CHIP BLONDIES

One of the best things about these Chocolate Chip Blondies – other than, you know, how delicious they are – is that they come together in just a few minutes.

In fact, you don’t even need to use a mixer to make these blondies! I usually just grab a whisk and a spatula.

Whisk together the flour, baking powder, and salt and set that aside.

Whisk together the melted butter and brown sugar until well combined, then whisk in the eggs and vanilla. Stir in the dry ingredients, then fold in the chocolate chips.

Spread the batter into a greased metal baking pan and bake for 35-38 minutes. The center of the blondies should just be set when they’re done.

If you’d like, sprinkle the top of the blondies with some flakey sea salt as soon as they come out of the oven. Set the pan on a wire rack and allow the blondies to cool for at least 1-2 hours before cutting.

Yes, seriously! Wait to cut them! When you pull them out of the oven, they’ll be just a smidge underdone. By the time they cool completely in the pan, they will have coasted to the perfect doneness before you cut them.

Once you cut them, your biggest challenge will be not eating them all yourself. But if you do, I won’t tell anyone.

WOW! These are fantastic!! I had to tweak it a little because of the ingredients I had on hand- salted butter (omitted salt in recipe), milk chocolate chips instead of semi-sweet & dark brown sugar because that's all I ever use. I did reduce the amount of sugar to 1 1/3 cup after reading some comments about them being a little too sweet and they turned out amazing. Such a great texture after impatiently waiting the recommended 2 hours to cool, but it was worth it! They have a thin layer of crispiness on the top and the rest is wonderfully dense and chewie without being stick-to-your-teeth gummy. These would make great ice cream sandwiches.

So glad you enjoyed these, Brandie! Thanks so much for stopping by and sharing your feedback. Happy baking! Jamie

I finished making these 2 hours ago and just finished eating one of these absolutely delicious Chocolate Chip Blondies. I followed the recipe exactly as directed and they are perfect! I didn’t use the optional sea salt. The kosher salt and brown sugar ratio are a perfect marriage. I’m making another batch and taking them with me on our family picnic tomorrow. Thank you for this recipe!

Thanks for stopping by to share your feedback, Michelle! Happy baking! Jamie

I followed the recipe, however, my dough not batter, came out in the same consistency as chocolate chip cookie dough!

Hi there! It's definitely a thicker batter that you press into the pan. Hope this helps! Jamie

Made these today on a very chilly December day, they turned out perfect! But a little sweet. Could for sure use maybe 1/4 cup less sugar if you like them less sweet! Otherwise they are perfect and exactly what I was craving.

So happy to hear you enjoyed the blondies, Lindsay! Thanks so much for stopping by and leaving your feedback. -Jamie

I made these blondies last week and my family loved them! The one thing we did agree on was they were just a little bit too sweet. Is there an adjustment I can make to they aren’t so sweet? I did not put the salt on top.

Hi Robin- You can simply lessen the amount of sugar by a little bit. That might help! -Jamie