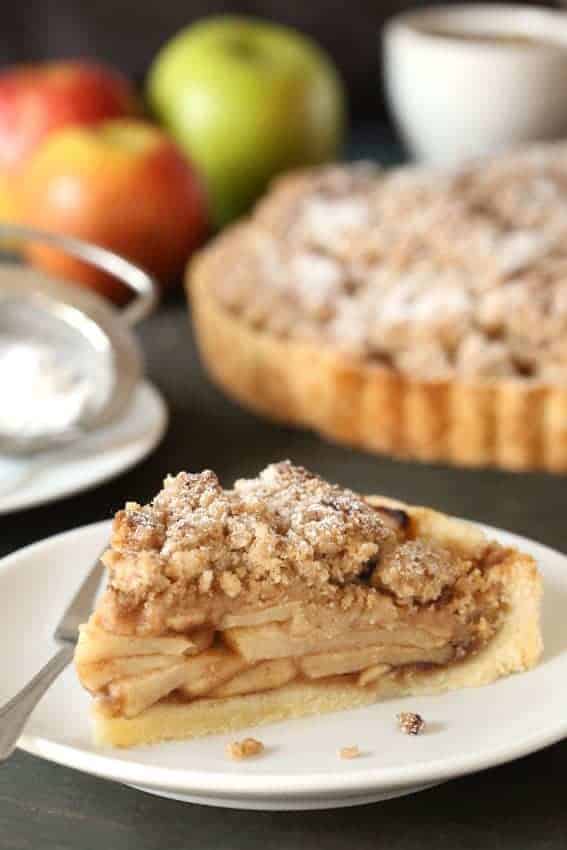 This gluten-free apple tart has a thick crumb topping and can also be made with traditional all-purpose flour. Enjoy it with a cup of coffee for a sweet breakfast or a delicious Fall dessert.

This tart was the first autumnal thing I’ve baked this year. Before I made it, I had been rolling my eyes at the fall-themed desserts I’d been seeing for the past month on Pinterest and everywhere else.

It’s still summer, right? But after a bite of this tart, my opinion changed. Hand over the apples and apple pie spice! 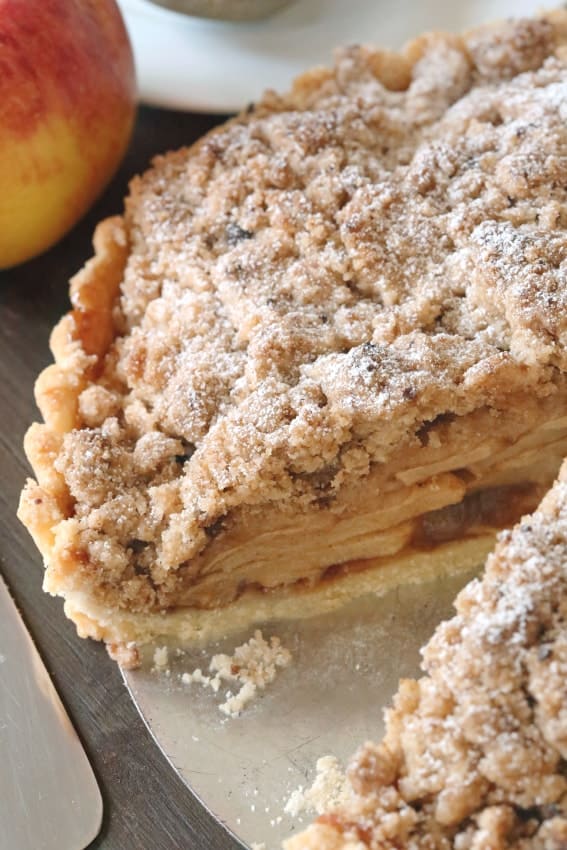 The crust and topping use a mix of gluten-free flours but if you don’t have those on hand, you should be able to use any all-purpose gluten-free mix.

I obviously haven’t tried them all in this recipe but it should work as long as that flour blend is a 1:1 substitute for all-purpose flour.

The beauty of this crust and crumb topping are how flexible they are. They also work with regular all-purpose flour and white whole wheat if you don’t need this apple tart to be gluten-free. 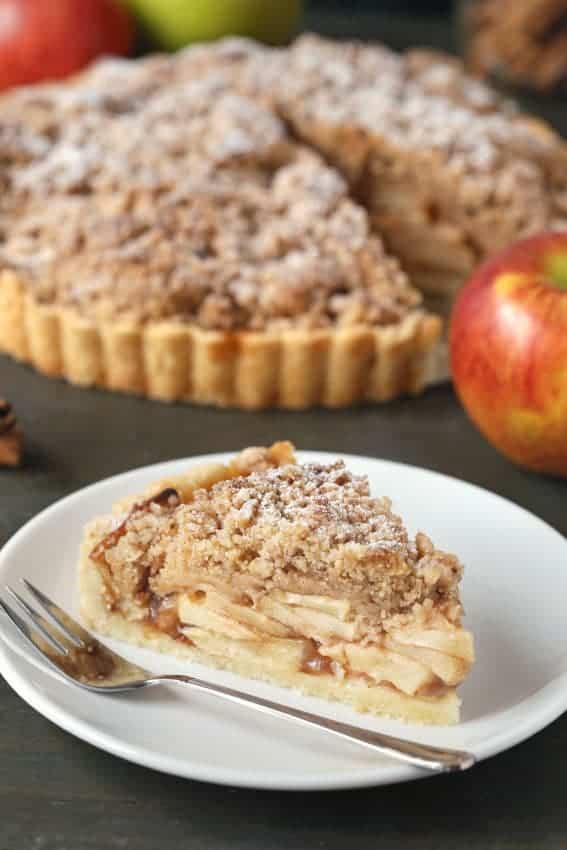 Some of the topping will fall off as you put it on, but it’s easy enough to put right back on. If you’re worried about making a mess, you could probably use a deep-dish pie pan. In that case, you’d probably want to roll the dough out with a rolling pin. I’ve also made this recipe using six 4.75″ mini tart pans. After the initial 10 minutes of baking at 425 °F, I only baked them for another 25 minutes at 350°F rather than the 40-45 that the full-sized tart requires.

I have to admit that I was slightly terrified before cutting that first piece. The crumb topping seemed so firm that it’d crack and make a mess but it slices wonderfully! I waited for the tart to cool completely, though. Cutting it while warm is probably not the best idea if you want it to stay in one piece. 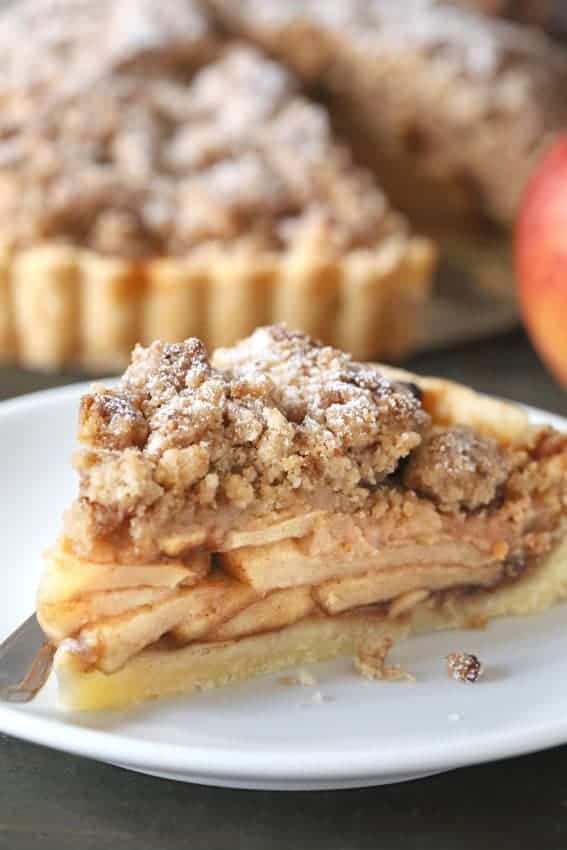 I made this tart in late August and wasn’t quite in the mood for lots of autumnal spices yet but if you’d like, you could use 1 teaspoon (or more!) of apple pie spice in place of the cinnamon and nutmeg in the apple filling.

It does take some time to put this apple tart together but it’s so worth it. If you’re a little low on time, try my gluten-free apple crisp, which is a much quicker, thought not quite as elegant, alternative to this apple crumb tart! 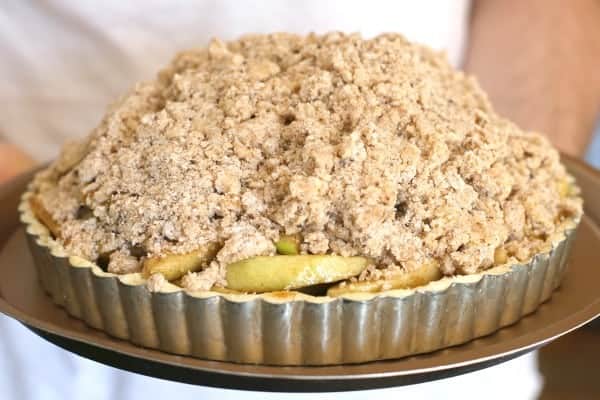 For the Crumb Topping

For the Apple Filling

For the Crumb Topping

For the Apple Filling

* You can use your favorite gluten-free flour mixture that's a 1:1 substitute for regular all-purpose flour. If you don't have one on hand, the following recipe from Land O'Lakes is what I used for this tart. I highly recommend using a scale rather than measuring cups to ensure accuracy. Using this flour mixture, you'll use 1 1/2 cups (245 grams) in the crust and the same amount in the crumb topping.

If you need the tart to be gluten-free, make sure all your products are certified gluten-free

Before my gluten free days, when my body obeyed instructions, I could make wonderful pie crusts. But my stomach has rebelled. I am a frustrated baker now who must eat gluten free. I am going to use your baking mix for a different recipe, and we will see!

GF pie crusts are difficult. :/ This upside down apple honey cake is one of my favorite recipes and uses this mix. It may even be more delicious than the all-purpose flour version!

Hi! I used your gluten free flour recipe for the tart. But I didn't blind bake it. Should I have done that? I can't say we didn't like it, since it's mostly gone! But it wasn't what I expected. Also, I alway weigh gluten free ingredients, so it wasn't that either. Thanks for your quick reply!

Hmm! Then I'm not really sure. I was thinking that maybe you had used a different mix. And no, no need to blind bake it if you follow the recipe. :) If you use another crust, you might need to do that. I'm happy you still enjoyed it! I wish I knew what could have caused the cakey-ness.

Hi. I made this tonight and it looked beautiful. However, I thought the crust was much too cakey. I like flakey crust or a shortbread- like crust. Do you have any suggestions for a crust is more like either of those? My tart pan is 9". Thank you!

Hi there! The crust shouldn't be cakey but rather shortbread-like. What kind of flour did you use? I've made and like this recipe, which yields a flaky tart crust for a 9" pan. However, I blind-baked it. I can't say for sure how it'd work to put the tart filling on top of the unbaked crust and then baking it. I'd love to hear how it goes if you try it out. Thanks for your comment!

I just made this. I found the amount of sugar required for each element to be way too much so I halved it in most places. It was still too much! The crumble is way too sweet the base doesn't need sugar at all. Next time I make this I will use two to three tablespoons of sugar in the crumble overall.

I'm sorry you found it too sweet! Do you live outside of the US, by any chance? I'd say this tart is about as sweet as most American tart recipes but when you compare it to a European recipe, it's definitely sweeter. If you want to reduce the sugar in the topping from 3/4 cup to 2-3 tablespoons I recommend finding a different recipe as removing that much of any ingredient will have likely have a big impact on the crumble's structure. I hope you could still enjoy it!

Fantastic recipe, thank you for sharing it. It is now a regular at our house we love it so much (only slightly addicted you could say). I did add raspberries to the filling, and coconut and almonds to the crumble to make it more to our tastes. I am in love with the base, your flour mix is the best....I have made it with a regular gluten free mix and now twice with yours and yours wins every time. Thanks for a new addiction!!

I love your changes! I'll have to try it with raspberries and some coconut. It sounds delicious! And I'm so happy that you like the gluten-free flour mix. I've used it in so many recipes and it always seems to work well. Thanks so much for your feedback. :)