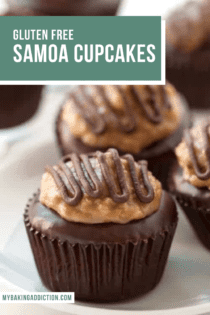 All througout elementary school, I was in the Girl Scouts but for some reason I can’t really understand, my parents almost never bought Girl Scout cookies. When they did, I always begged for Samoas. They are, by far, my absolute favorite. Now that I live in Germany, if I want Samoas, I have to make them myself. It saves me a lot of money, which is great, but homemade Samoa cookies can be pretty time consuming! Especially if you’re like me and feel compelled to fiddle with the topping of each and every cookie until it looks perfect. 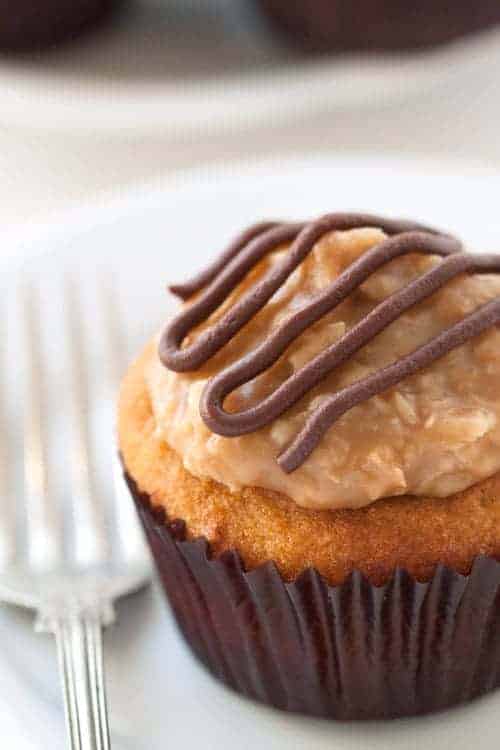 I’m thrilled to report that Samoa cupcakes are just as delicious and aren’t quite as fussy! The cupcakes are coconut flour based and call for one cup of flour and 8 eggs. It sounds crazy but coconut flour absorbs more liquid and requires more eggs than other kinds of flour, meaning you really can’t sub another type of flour in these cupcakes. If you have almond flour or meal on hand, a double batch of these grain-free chocolate cupcakes would be perfect. For those of you who don’t need the cupcakes to be gluten-free, you can use any cupcake recipe you like but keep in mind that the topping is only enough for 16 cupcakes.

When I took the cupcakes out of the oven, I immediately tried one and was ready to throw them away due to what I thought was a funky texture. I decided to give them another try later on and I’m so happy that I did because once they’re cool, they have a great texture! It’s not exactly like a normal cupcake but for gluten-free? Pretty awesome. The brown sugar adds a little special something and the coconut flour complements the coconut caramel topping wonderfully. 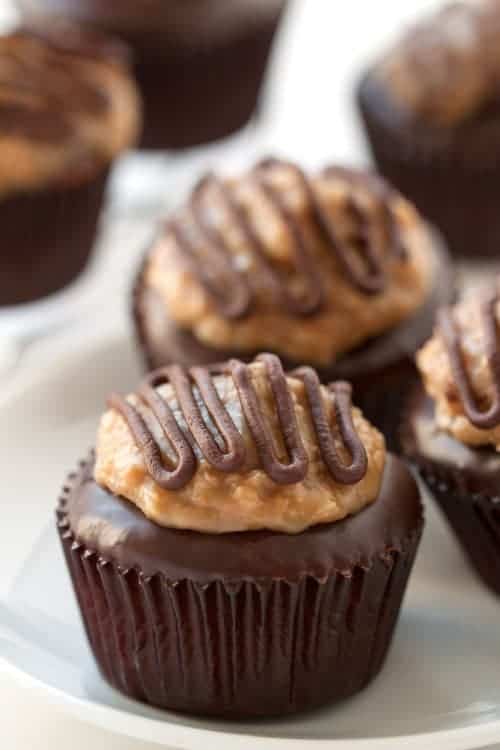 For the topping, I used the same caramel as in these gluten-free mini caramel pecan tarts. All of the other Samoa-inspired recipes I’ve seen use store bought caramels, but honestly, this homemade version takes you less time than unwrapping all those individual caramels! It’s also ridiculously simple and hard to mess up.

So what’s your favorite homemade Girl Scout cookie treat? After making these Samoa cupcakes, I can’t wait to try more!

For the Brown Sugar Cupcakes

Great recipe! I also love samoa cupcakes but the recipe that I used was quite tough! Thanks for providing recipe directions in detail!

Thanks so much for stopping by!

Thnx for an amazing recipe

Preety- Thanks for visiting.

These look FABULOUS! But what did you mean when you said if using almond flour a double batch is in order? Do you mean double the flour but keep the egg count the same? Thanks for clarifying!

OH.MY.GOODNESS! I made these over the weekend and even though they were a little labor intensive they were sooooo worth it! The coconut topping was simply, well, over the top! I was nervous that the gluten free cakes would raise some eyebrows but they were so perfectly paired (not sweet) with the toppings. These are my new go-to, proud to be the bringer of these - standby!

I'm SO happy to hear that you enjoyed them so much! I'm with you - these take a while to make but are worth it in the end. :) Thank you so much for your feedback, Kathi!

You know, I've STILL never baked with coconut flour, but this has to be the first recipe I try! Samoas are definitely my all time favorite girl scout cookie (as an adult...as a kid, it was all thin mints all the time). Love!

Don't you also do gluten-free baking? You need to get yourself some coconut flour! ;) All coconut flour (opposed to coconut flour mixed with another flour) goodies aren't my favorite (I normally really dislike them) so these were a huge surprise! I hope you'll love them as much as we did. :)