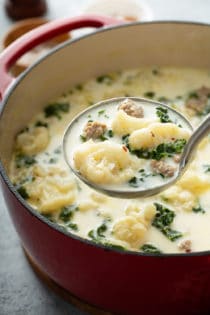 Low Carb Zuppa Toscana is packed with sausage, cauliflower, and kale for a lower-carb version of Olive Garden’s Zuppa Toscana soup. This twist on the classic is one you’ll want to make over and over!

There are quite a few recipes that I love, but I only make for myself because Eric & Elle aren’t really the biggest fans, and this Low Carb Zuppa Toscana is one of those recipes. Neither of them are cauliflower lovers, but it just so happens to be one of my faves.

I’ve been super into Olive Garden’s Zuppa Toscana for years and back when I taught school, I’d eat it for lunch multiple times a week because Olive Garden is just around the corner.

The great thing about this Low Carb Zuppa Toscana is that it is super versatile. You can use hot sausage instead of sweet, baby spinach instead of kale and cauliflower instead of potatoes.

I love making a batch of this on the weekend, so I can eat it for lunch all week long.

You all know how much I love soup when the weather is below 75 degrees.

I may eat the most soup during the fall and winter months, but there is something about a cozy bowl of soup on a dreary, drizzly March day that warms me right up.

But as much as I love recipes like my Cheeseburger Soup or my Loaded Baked Potato Soup, I don’t always love how they weigh me down.

Some time ago I started making this lower-carb version of my homemade Zuppa Toscana. By swapping the potatoes for cauliflower, I get a soup that’s just as filling but isn’t quite as heavy.

Let me tell ya, you won’t even miss the potatoes in this Low Carb Zuppa Toscana. It’s even become my go-to over the original!

I like to serve classic Zuppa Toscana alongside Beer Bread or Soda Bread. But if you want to keep the whole meal low carb, try serving this version alongside Low Carb Almond Flour Bread or Keto Breadsticks.

WHAT IS ZUPPA TOSCANA?

There are a lot of variations on a classic Tuscan soup, but the Olive Garden version is probably the most famous here in the United States. That version uses just a few ingredients for a rich and hearty soup:

By making our Zuppa Toscana with cauliflower instead of potatoes, we’re making it lower carb without sacrificing flavor – I promise!

If you aren’t a big fan of kale, you could always try this recipe with fresh spinach instead.

IS THIS RECIPE EASY TO MAKE?

This soup is one of the easiest to make! In fact, it only has 3 main steps:

That’s it! This really is a 30-minute meal, especially if you buy bags of cauliflower that has already been cut into florets.

In fact, sometimes I even buy bags of frozen chopped onions to keep on hand for days when I’m short on time and don’t want to dice an onion for the meal I’m making. These little shortcuts can save you a few minutes and effort here and there and make the difference between actually cooking dinner or ordering takeout.

And I promise – this is a dinner you’ll be glad you took the small amount of effort to make.

CAN YOU FREEZE THIS SOUP?

I don’t typically recommend freezing soups made with a lot of dairy. They can sometimes change in texture or separate when thawed. No thanks.

There’s still a way to freeze your Low Carb Zuppa Toscana, though. Prepare this soup up until the point of adding the cream and the kale. Let it cool, then freeze it in an airtight container.

When you’re ready for dinner, just bring the thawed soup to a simmer before adding the cream and kale and cooking for 10-15 minutes as noted in the recipe.

You’ll still cut down on the prep time needed on the day you want to eat your soup, without having to deal with a weird texture when it’s ready!

To kick things up a notch, substitute hot italian sausage for the sweet and increase the amount of red pepper flakes. Please note the color of the soup may take on an orange color with this substitution due to the spices in hot sausage.

WOW this was great. I followed the recipe as is, and then added a sprinkle of nutmeg and squeeze of a lemon to brighten it. Absolutely delicious, will definitely make again!

So glad you enjoyed the soup, Jen! Thanks so much for stopping by and sharing your feedback! -Jamie

This is sooo good. I found the recipe searching for ways to get more veg in our diet. My husband, who is not a soup person, asks for it often. Even in the summer. I just throw in a whole head of cauliflower (the bigger the better) and whole bundle of kale. Because we were not specifically going low carb I also make a separate pot of pasta noodles and we add a bit to our bowls to make it a little more filling.

So happy to hear you enjoyed the recipe, JB! Love your ideas for the cauliflower. Happy soup season! :)

This was simple and lovely! Served it with a sprinkle of smoked paprika, shredded cheddar, lots of pepper, and crusty homemade rye with garlic butter. And don't laugh... I'm veg and subbed the meat with some faux crumbles (w/lots of Italian spices) and slices of faux Italian sausage (and veg vice chix broth) - it TOTALLY worked! My Very carnivore hubby [who would eat sausage every day if I let him] even loved it, but we're with you, we adore cauliflower. Easy, healthy, and ingredients I generally have on hand. Will make again and again, thank you madam!

So happy to hear you enjoyed the recipe, Abby! Thanks so much for stopping by and leaving your feedback and adaptations. -Jamie

We have been making it with rice cauliflower for a couple of years now. We do half sausage & half beef mixed together & spinach instead of kale. Love this zoupa!

Yay! So happy to hear you enjoy the recipe. Love the cauliflower swap!

Can Coconut milk substitute for the cream?

@Machelle Wright, yes, this is how I do it, I also use chicken sausage which is healthier. It's much better with coconut milk

@Jamie, It's great! I get the riced cauliflower from Costco. Just thaw it, press out the excess water & add it in. The first time I had it, I had no idea if wasn't minced potatoes. I actually prefer it over potatoes. Just use a couple of bags!

Hi Machelle- I have never attempted this substitution so I am not sure how that will taste. If you give it a go please let me know how you like it. -Jamie