Go-To Dough is a simple yeast dough recipe. It makes perfect cinnamon rolls and the perfect dinner rolls. It’s a double-duty dough you can make in no time. Split it in half to make a batch of each! 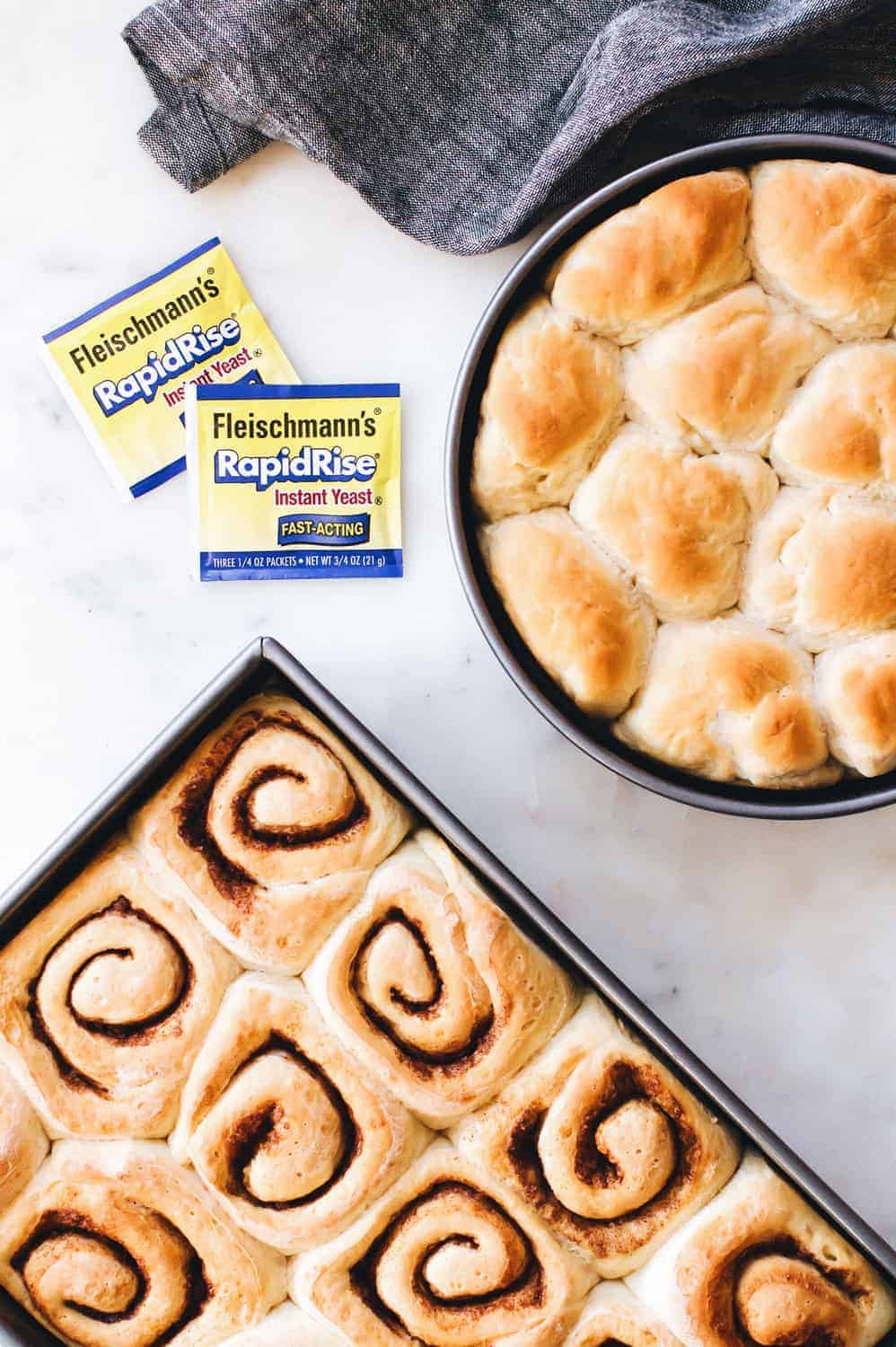 This post is sponsored by Fleischmann’s® Yeast as part of the Bake It Yourself Blogger Program. Thank you for continuing to support the brands that make My Baking Addiction possible.

Since having Elle, I’ve become even more sentimental about the holiday season. As she gets older, I find myself trying to make every aspect of the season as magical as I can.

Whether it’s a train ride that pulls into a glistening North Pole Village filled with caroling elves, or dressing up a certain elf that likes to sit on a shelf in adorable costumes, I am that mom. The one that tries to fill the season with as many magical memories as possible.

As I’ve mentioned before, I’m kind of a control-freak when it comes to holiday meals because I’m an absolute sucker for food traditions. 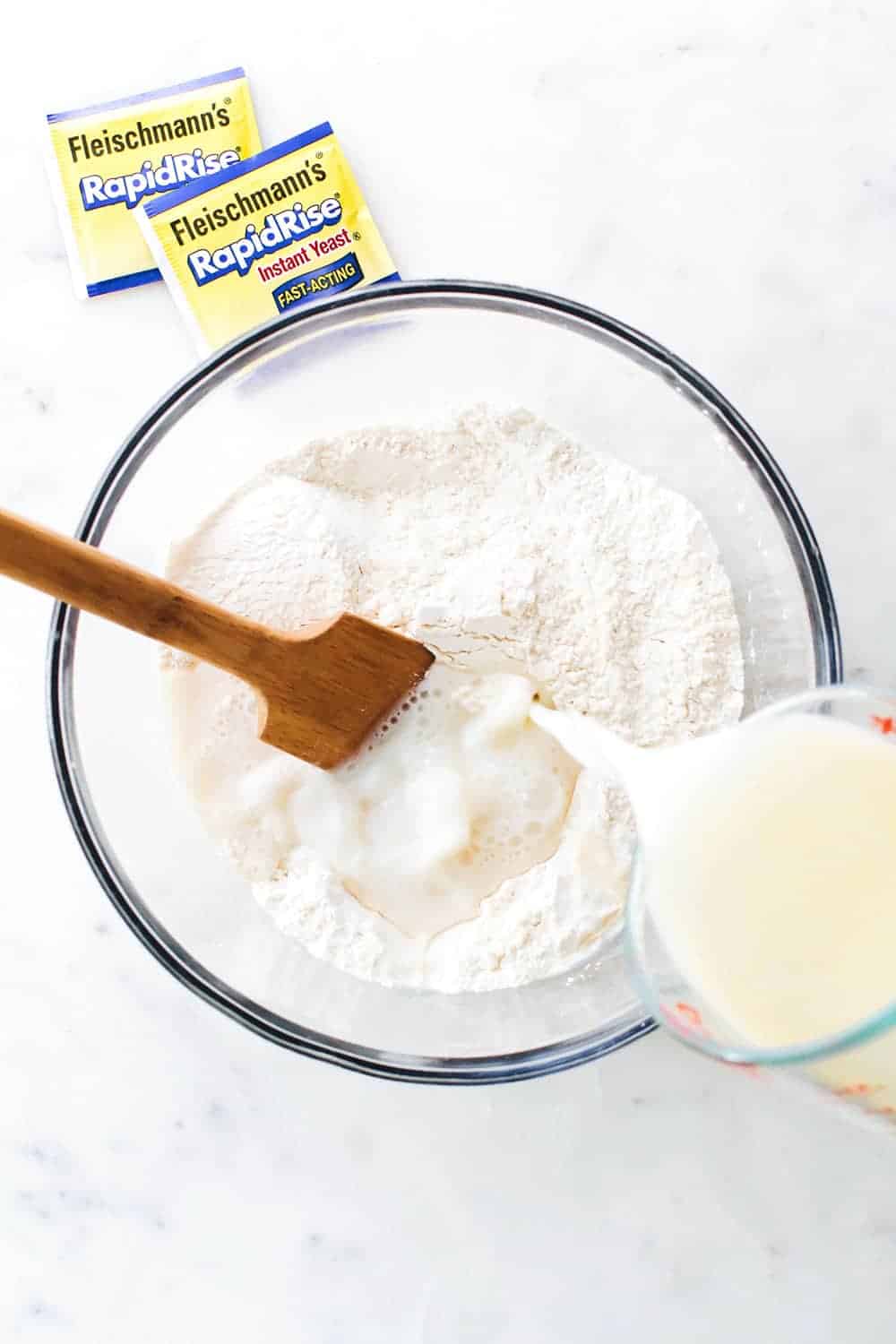 Sure, we add new items to the menus every year, but the core always stays the same. And honestly, I really want Elle to fondly remember my cheesecake and sweet potato casserole the way that I remember my Nana’s Chicken Paprikash and Pumpkin Roll.

One of the traditions we started when we moved back to Cleveland was to have Christmas morning breakfast at our place. 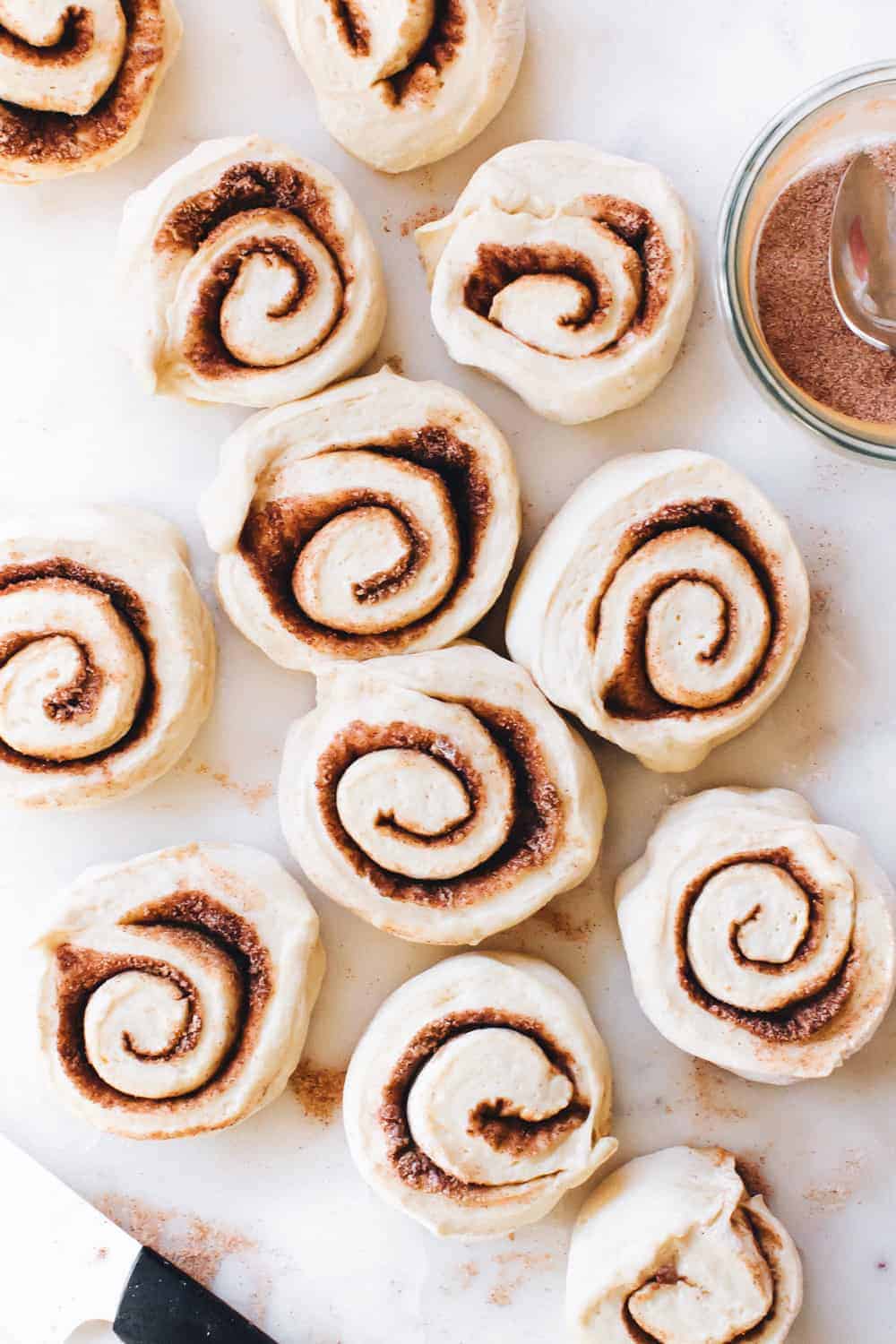 The grandparents gather here to watch Elle open her gifts from Santa and we all enjoy a delicious breakfast together.

Then we all split up for the afternoon, take naps and meet back at our place for dinner.

Yes, I cook two large meals in one day, but I wouldn’t have it any other way. 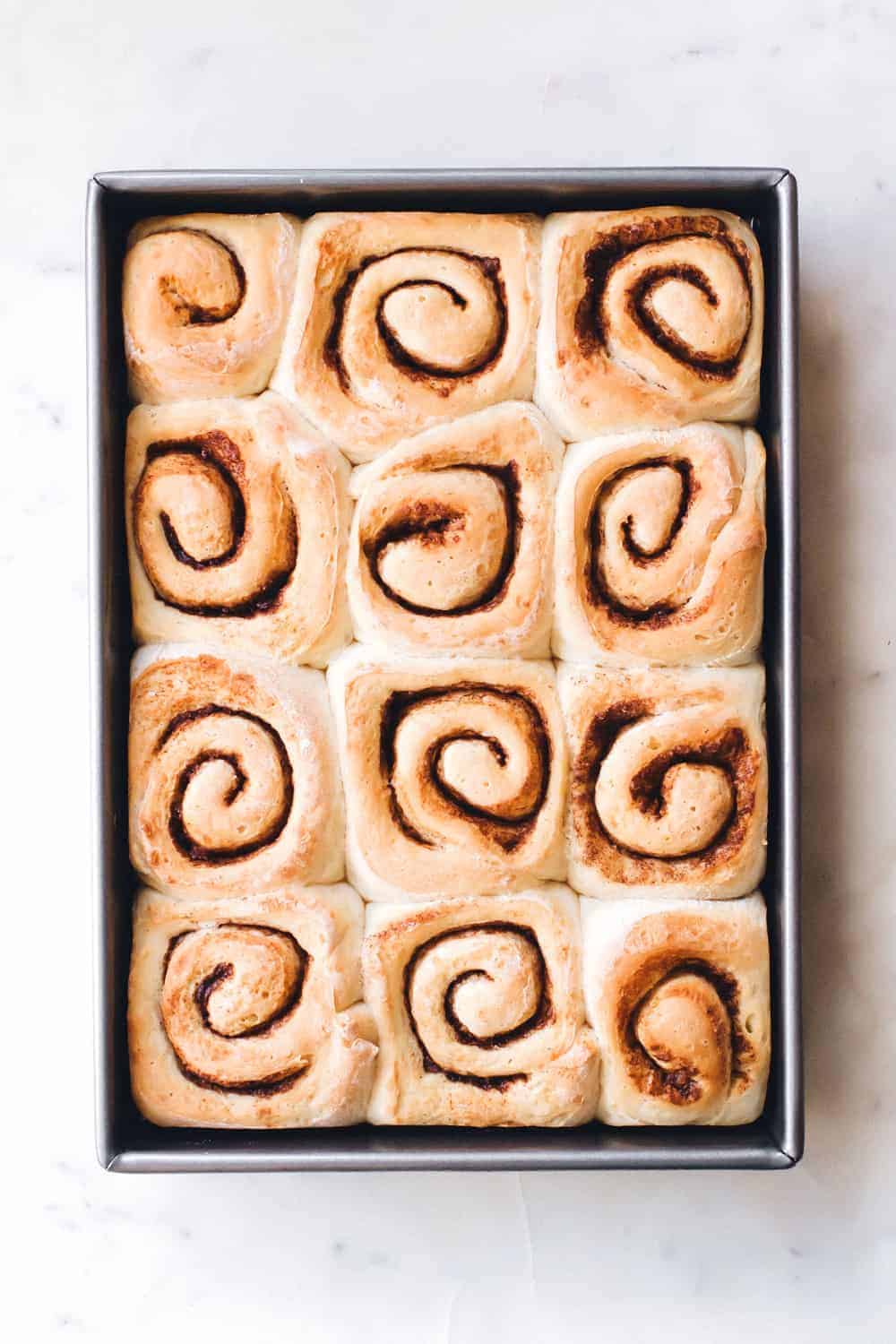 But I’d be lying if I didn’t find ways to make certain recipes do double duty. I make a double batch of parboiled potatoes so that some become morning hash browns and the others become mashed potatoes later in the day.

Sausage gets served at breakfast and becomes part of my stuffing at dinner time. (Oh yes, stuffing with sausage is where it’s AT.)

This Go-To Dough recipe does double duty as well. I use half of it for cinnamon rolls for breakfast and the other half for buttery dinner rolls. 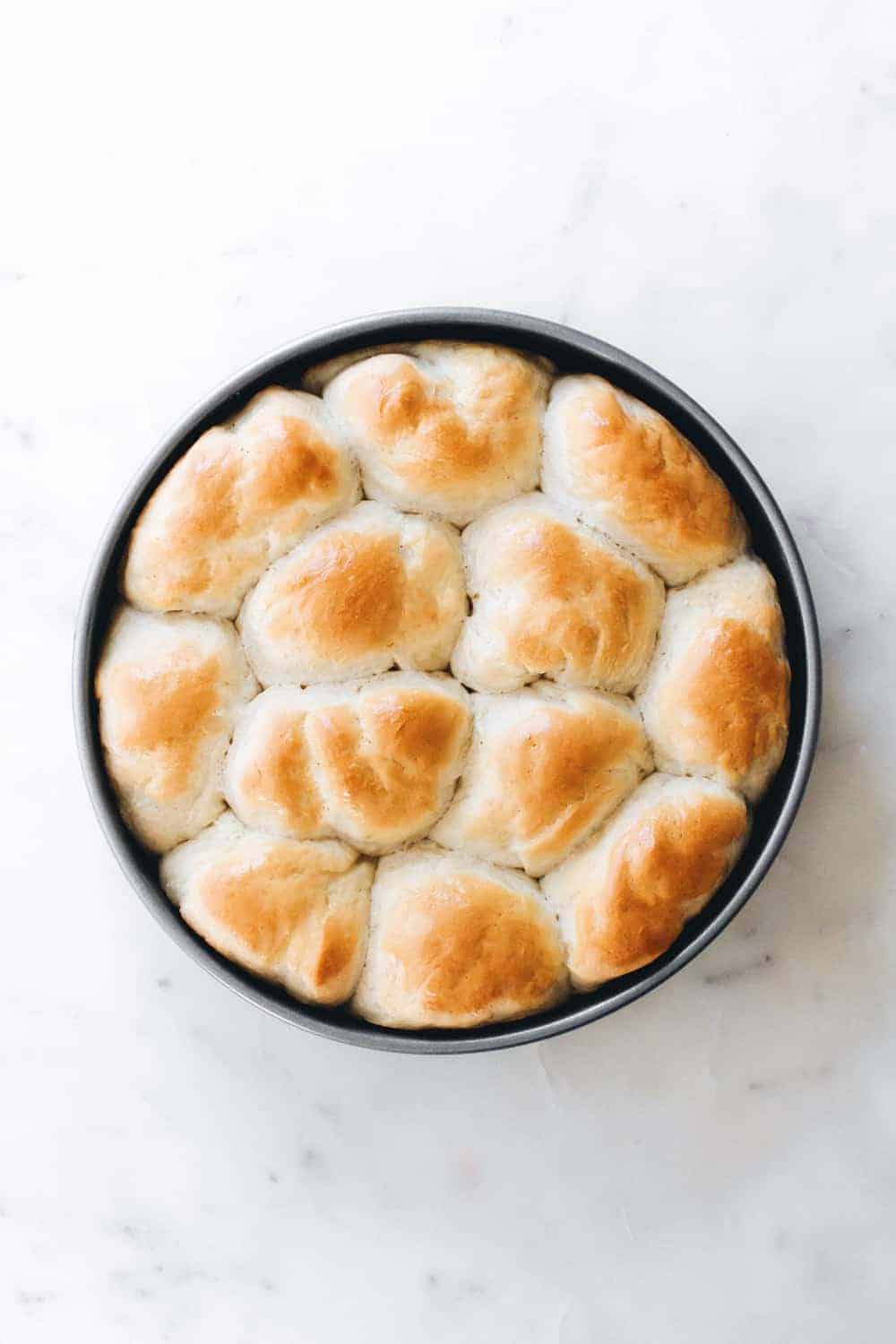 Yep, one dough recipe will have you serving up fresh baked goodness at two separate meals.

Yeast dough really doesn’t have to be scary to make. Even though a lot of beginner bakers find baking with yeast intimidating, it can be easy when you pick the right yeast dough recipe and the right ingredients. 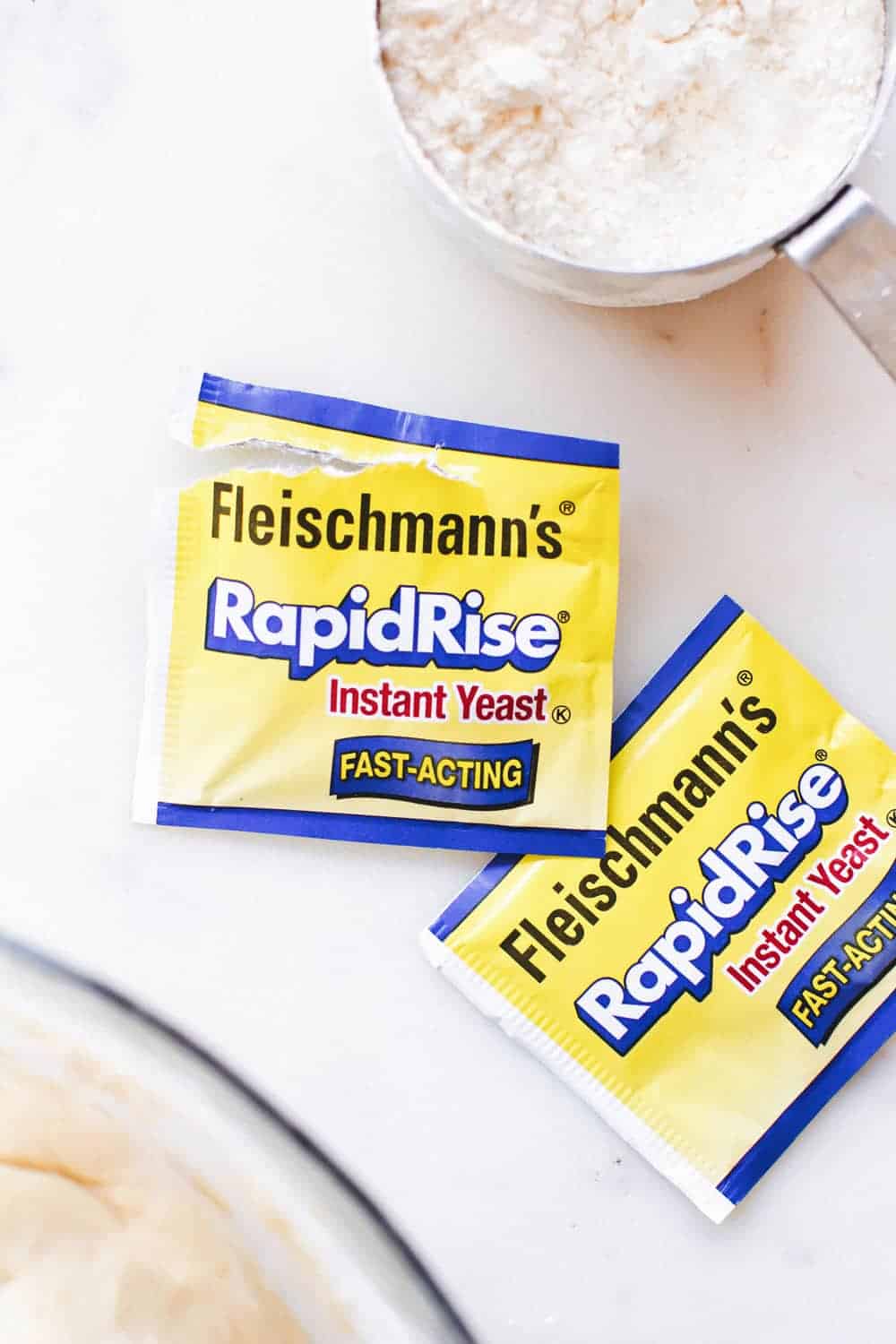 I’ve worked with Fleischmann’s® for years because, in my opinion, it’s the best and most reliable yeast on the market. From Sour Cream Rolls to Easy Pizza Pockets and Cinnamon Sugar Soft Pretzel Bites, Fleischmann’s® Yeast gives me perfect results every single time. 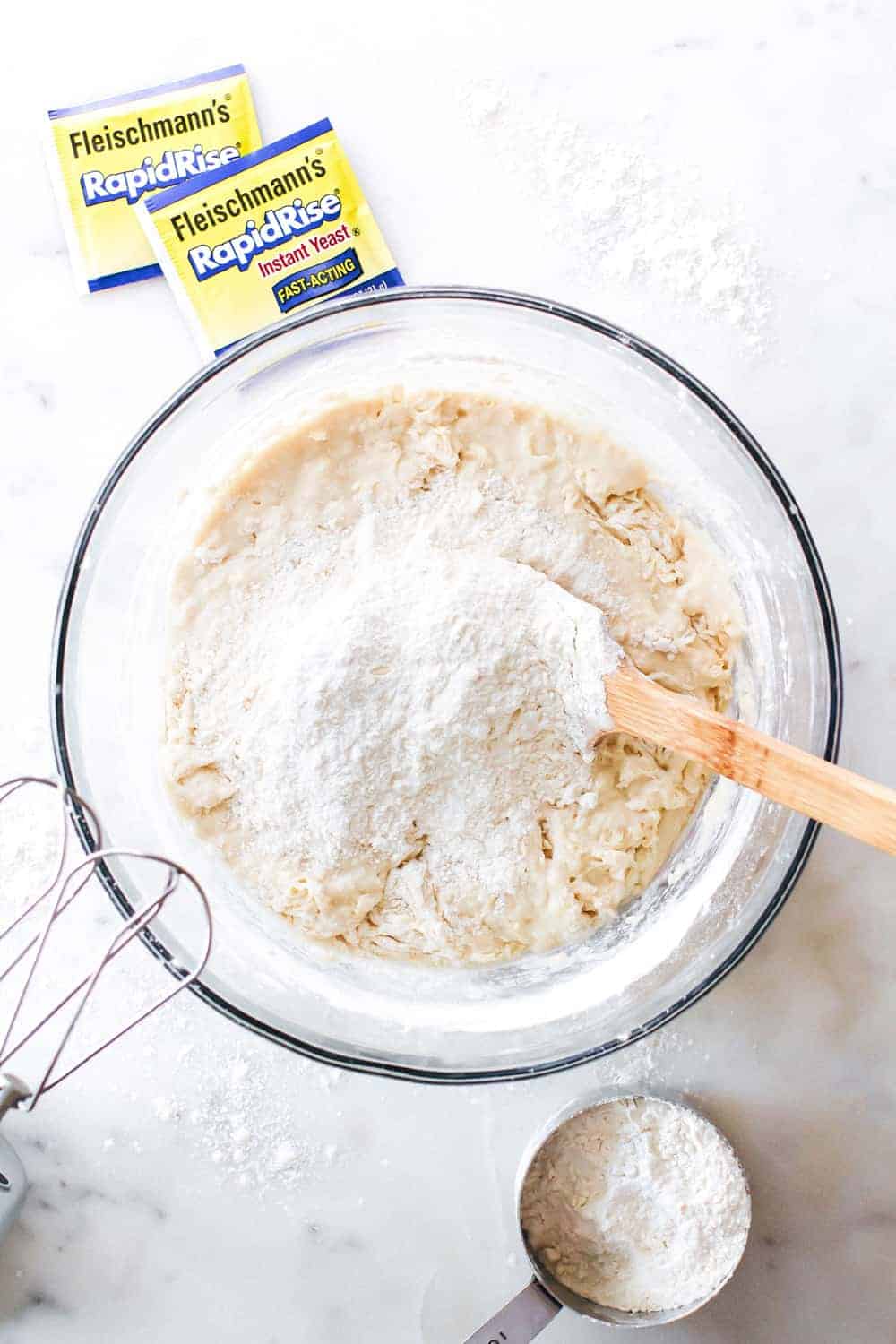 This Go-To Dough is a great yeast dough recipe for beginners because it is super versatile. You can use this one yeast dough to make two different recipes – cinnamon rolls and dinner rolls.

How great is that? Breakfast and dinner with one recipe. That’s my kind of dough. 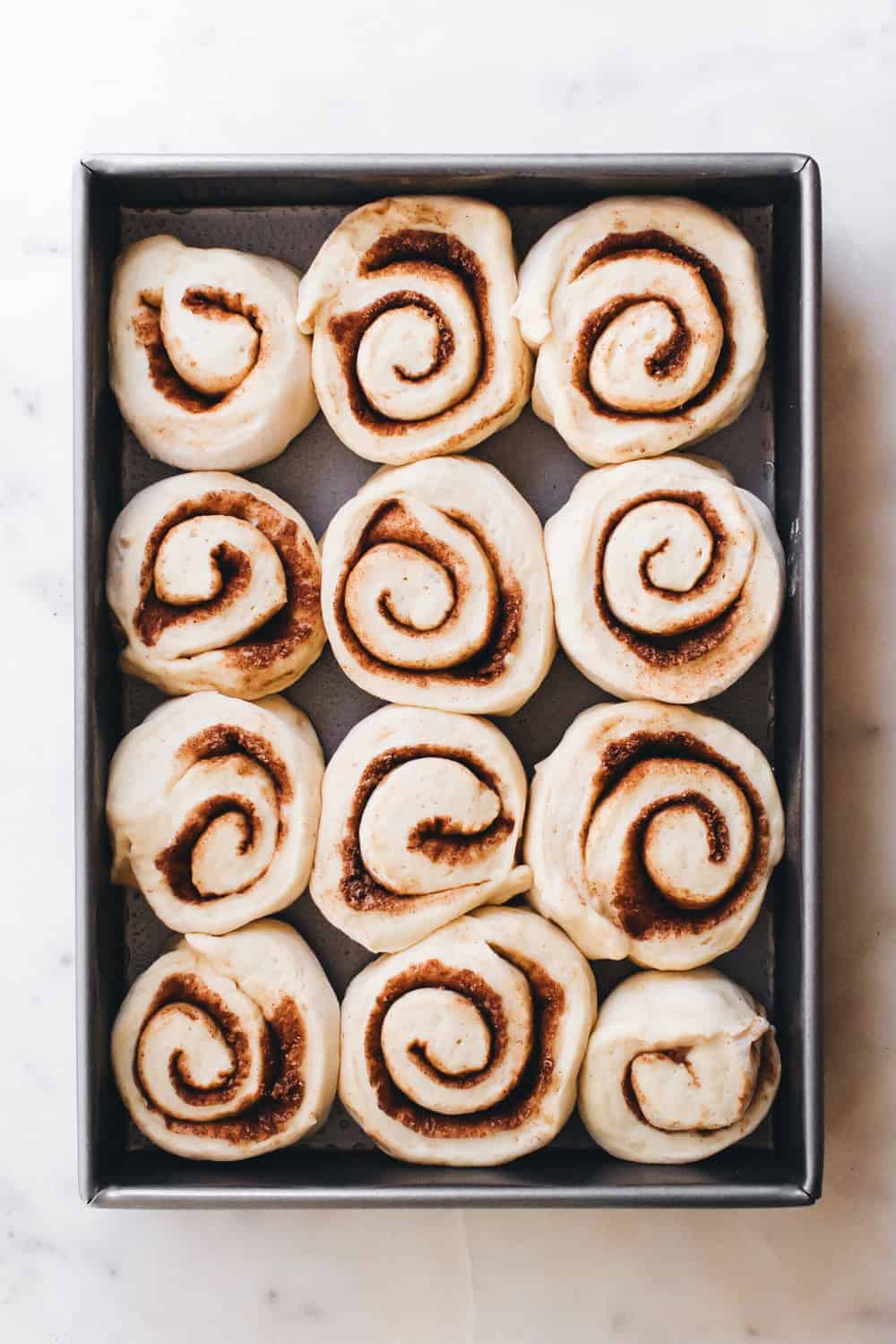 Once you’ve made your Go-To Dough, allow it to rest for 10 minutes before splitting it in half.

Use the first half to make Beginner’s Frosted Cinnamon Rolls. Using Go-To Dough as a cinnamon roll dough produces cinnamon rolls that are pillow soft and full of flavor.

Spread the cinnamon roll dough with softened butter and sprinkle with cinnamon-sugar before rolling it up and slicing into 12 equal pieces.

These finished Frosted Cinnamon Rolls are topped with a sweet vanilla frosting. I like to frost these cinnamon rolls when they’re still a little bit warm, so the frosting melts down into the swirls of the cinnamon rolls. 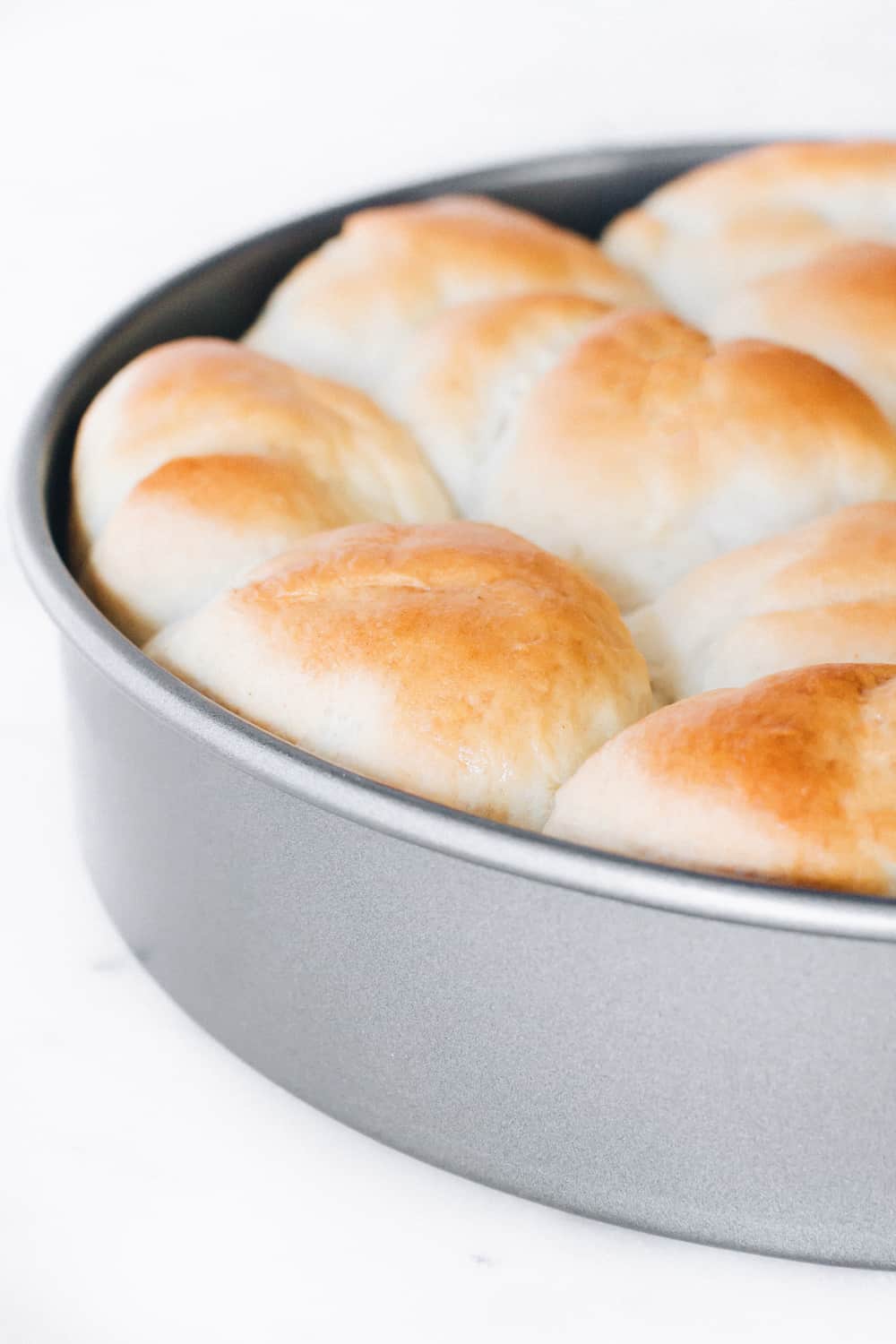 The only thing easier than using the first half of the Go-To Dough as a cinnamon roll dough is using the second half as an easy dinner roll dough.

To make dinner rolls, all you need is the second half of the Go-To Dough and some melted butter. Yep, that’s it.

Simply cut the dinner roll dough into 12 pieces, roll them into balls, and place them into a greased pan. Unlike the Frosted Cinnamon Rolls, these Go-To Dough Dinner Rolls will only need to rise for about 30 minutes before baking. 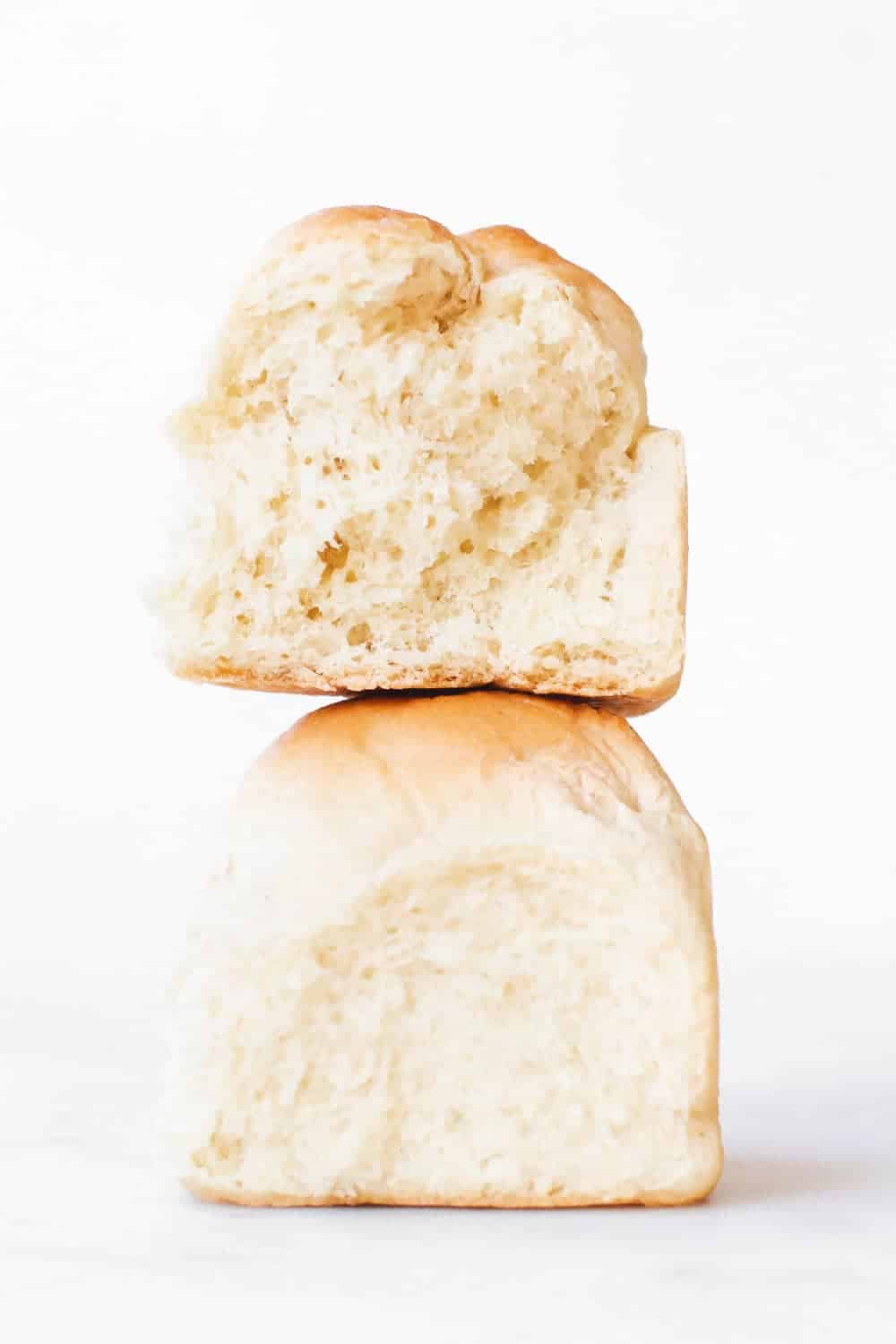 Don’t be scared by baking with yeast. Give this Go-To Dough recipe a try and whip up a batch of Beginner’s Frosted Cinnamon Rolls and Go-To Dough Dinner Rolls with the resulting dough. Your family will be impressed and I can guarantee you’ll want to come back to this dough again and again. 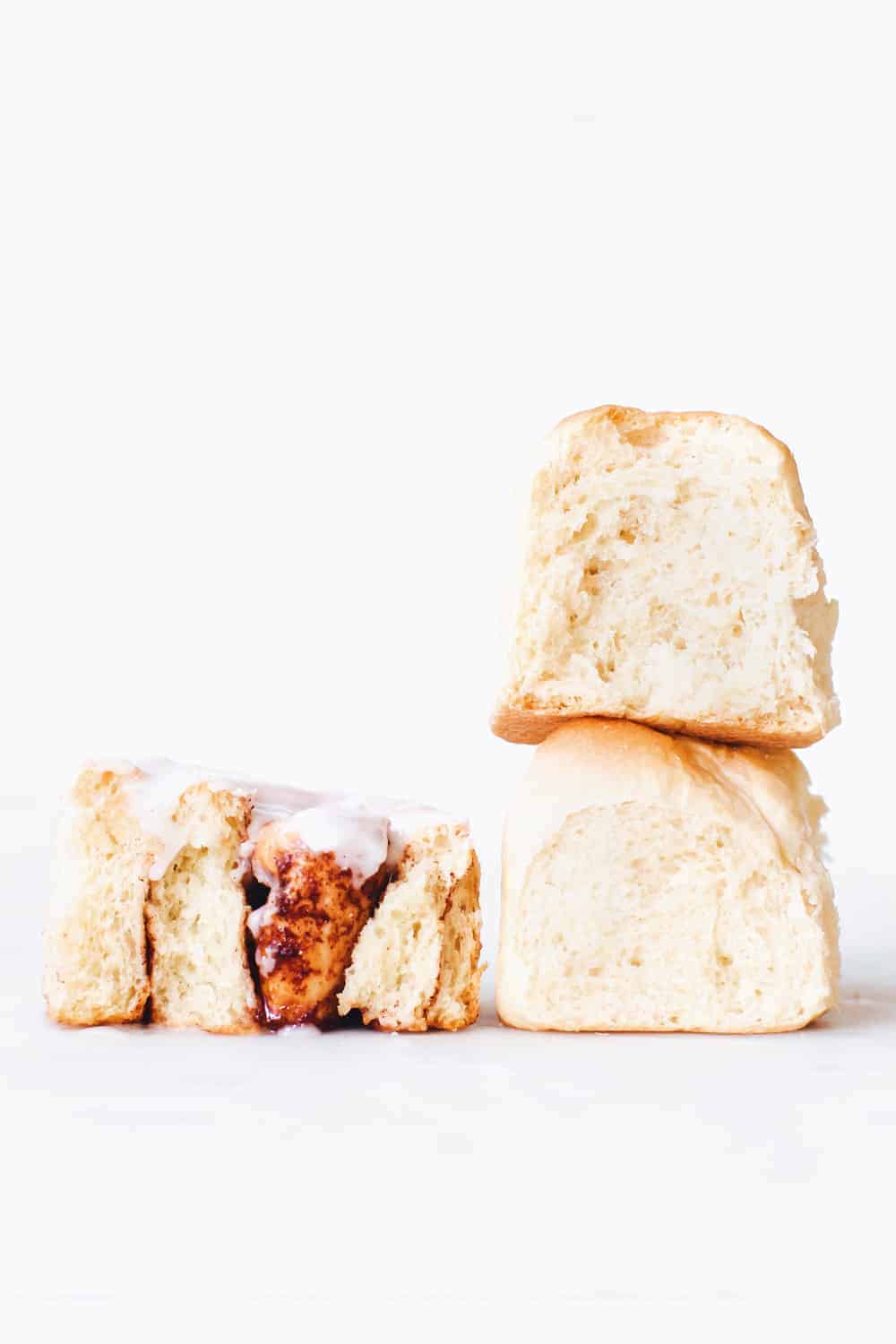 *If you don't have a thermometer, water should feel very warm to the touch.

**To knead the dough, add just enough flour to the dough and your hands to keep the dough from sticking. Flatten dough and fold it toward you. Using the heels of your hands, push the dough away with a rolling motion. Rotate dough a quarter turn and repeat the "fold, push and turn" steps. Keep kneading dough until it is smooth and elastic. Use a little more flour if dough becomes too sticky, always working the flour into the ball of dough.

Was this the dough suggested for Swedish buns?  I can’t find the original post ?  Thank you

Hello! I do not have a recipe for Swedish buns on my site. Sorry I can't be more help! Jamie

I made a double batch of Cinnamon rolls for Christmas Brunch this year, they were a huge hit. I made the rolls on Christmas Eve night and left in the fridge overnight. I took them out in the morning a let them rise for about 45 minutes and they turned out perfect. I also doubled the amount of milk in the frosting recipe and omitted the butter, this turned the frosting into more of a glaze. That's how my peeps like them. The recipe is really easy to make and the cinnamon rolls are delicious. This will definitely become a new Christmas tradition.

Hi Jamie .... It's me again, Nancy On Maui! I haven't made home made bread, rolls for ever, so your recipe for Go To Dough and Frosted Cinnamon Rolls caught my eye. I just LOVE the smell of yeast in rising dough!! I made the dough this morning and then the cinnamon rolls for brunch. I had frozen cream cheese/powdered sugar frosting in the freezer that I took out the night before. Had the regular rolls with dinner. All turned out GREAT. Thanks for sharing your recipes. I'll be back!!

So happy to hear you enjoyed the rolls and the cinnamon rolls, Nancy! Thanks so much for stopping by and leaving your feedback! -Jamie

Can I use the dough hook on my electric mixer to do the kneading?

Hello! Yes, you should be able to knead it using your dough hook. Just take care not to over-knead it; that can sometimes be easy if using the mixer. Hope this helps! Jamie

I don't have instant rise yeast, could I use regular yeast? And what adjustments would I have to make? BTW, love the post.

Hello! You could use active dry yeast, but it would need to be dissolved in warm water first. The Fleischmann's FAQ page has some info on this that might help you: http://www.breadworld.com/education/FAQs. Hope this helps. Happy baking! Jamie