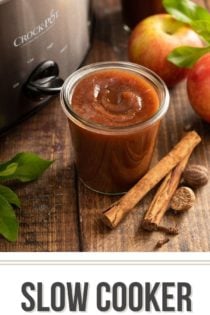 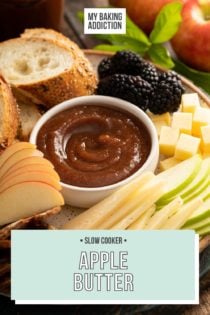 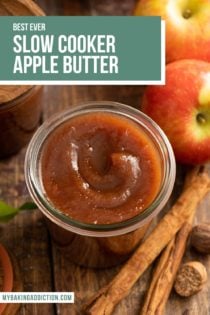 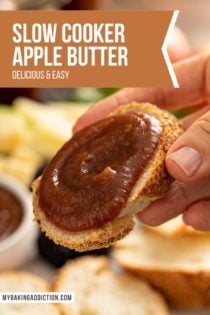 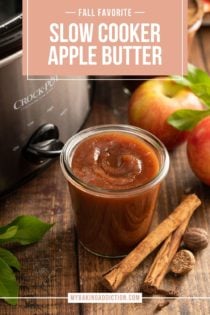 Slow Cooker Apple Butter will make your entire house smell like Autumn. It also makes a great gift for the holidays, or a hostess gift at Thanksgiving. YUMMO!

Autumn is my favorite season of the year. I am a lover of all things fall – the leaves and pumpkins, cozy sweaters and Ugg boots, a roaring fire with a good book and a plate of my No Bake Cookies, I adore it all – especially apple season.

Although I love meandering through the aisles of vendors, I really go for two very important reasons: caramel slathered apples and homemade apple butter.

Unfortunately, I’ve missed this festival two years in a row – last year because I was in San Francisco and this year because I simply forgot about it. I sulked for a hot minute, but decided that I’d get my yearly apple butter fix by making my own in the slow cooker.

WHAT IS APPLE BUTTER?

If you have never had apple butter before, you might be confused by the name.

No, it’s not apple-flavored butter. That would be weird. There’s actually no butter in apple butter at all.

Apple butter is basically just super concentrated, super smooth applesauce. It’s cooked for longer, which gives it that caramelized color and rich apple flavor, but the ingredients are nearly identical.

Apple butter is not just perfect on your morning toast (English muffin bread is my favorite!) or served on Potato Rolls at Thanksgiving, you can even bake with it.

Try subbing in Slow Cooker Apple Butter in place of jam or another fruit filling in crumb bars, such as in my Peach Crumb Bars or Raspberry Bars recipes. Or try it in an apple butter cake!

HOW TO MAKE APPLE BUTTER IN A CROCK POT

At first I was little bit intimidated by the whole homemade fruit butter thing, but really it could not have been easier!

Even though the flavors of apple butter are so rich, you’ll be surprised to know that the ingredients are super simple.

I know that 6 1/2 pounds of apples sounds like a lot, but I’ve got a tip for making peeling them a cinch.

Prepping all of those apples and turning them into homemade apple butter was a cinch thanks to my apple peeler and slow cooker.

The peeler allowed me to peel, core, and slice 6 1/2 pounds of apples in a matter of minutes. I tossed everything into the slow cooker, set the timer for 10 hours and went about my day.

The autumnal scents of apples, cinnamon and vanilla wafted around the whole place for an entire day, which improved my mood immensely. I’ll tell you – if you’re having a rough day, just make some slow cooker apple butter.

It’s impossible not to feel at ease with the entire world and people in it when you’ve got these scents enveloping you each time you walk in and out of your kitchen.

To make this recipe, I tossed the apples in my slow cooker. I then combined the sugars, cinnamon, and spices and tossed this with the apples.

I let the apples simmer away for the allotted 10 hours until the mixture was thick and dar brown, and in the meantime made chili, cornbread, and even prepped my jars for gift giving.

After the 10 hours, I removed the lid and let the apples keep simmering for another 2 hours. This thickens the apple butter even more.

After the second stage of cooking, it was time to puree the apple butter and jar it up! It really is the perfect way to spend a fall Saturday, I’ll tell you that for free.

The result was a delicious, velvety smooth apple butter that definitely rivals any of the jars that I’ve purchased at the Apple Butter Festival and the best part is – I made it myself!

If you don’t have 10 hours on hand to let the apple butter simmer, don’t worry – I also have a recipe for Instant Pot Apple Butter!

Really you can use any apples you happen to have on hand for apple butter.

Generally speaking, softer varieties of apples such as Fuji, Golden Delicious, McIntosh, or Jonagold work better since they cook down faster.

I used a mix of Granny Smith, Fuji and Honeycrisp in my apple butter, and even the crisper varieties broke down well for a smooth apple butter.

The real key is to use a mix of apples to get the best flavor. You can even customize your Slow Cooker Apple butter by using apple pie spice or even pumpkin pie spice instead of the blend I have here, and you could try Mexican vanilla instead of Madagascar.

It’s really easy to make it your own, and I know your family will love slathering it on toast all year long.

I’ve been told you can preserve this recipe through canning, though I haven’t tried it myself. I’d love to know if you’ve tried!

I hope you enjoy this slow cooker apple butter as much as we do.

What are your favorite fruit butter recipes? What should I try next?

When you can this recipe, do you add any acidity, such as lemon juice, to each jar and how much.

Such a delicious recipe, Jamie! I have made this every fall for three years now. We put it on peanut butter toast or use it for butternut squash apple muffins. Thank you! ❤️

I'm so glad you love the recipe, Felisha! Thanks for stopping by and leaving your feedback! Happy baking – Jamie

How can I ship this to someone? They have had other apple butter sent to them but it wasn’t refrigerated. This needs to be right?

We are making this tonight and going to hot pack it. So excited to try this new recipe. Cant find you on facebook to tag u. Taste good sk far.

I don't can--how long will this keep in the refrigerator?

Hi Beth – As noted in the recipe card, it will keep in the fridge for up to 2 weeks, or you can freeze it for longer. Hope this helps! Happy baking – Jamie