Pumpkin Pie Spice is so easy to make at home. You can amp up the cloves and ginger for a sharper flavor, or the cinnamon, for a softer, cozier spice. 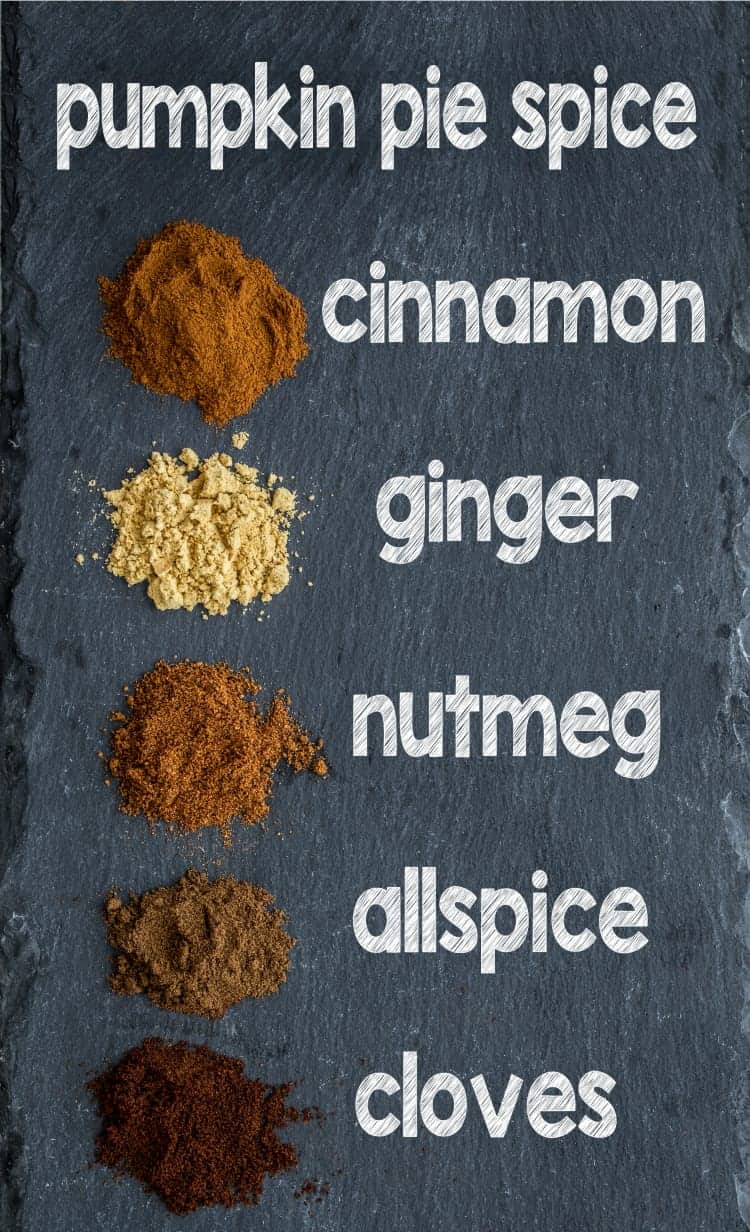 I have an addiction to spices. No matter how many times I obsessively organize and consolidate my stash, it turns into a ridiculous mess within days.

Eventually, it gets to the point where I can’t even close the cabinet door. Spices in full-on attack mode with the courage to jump out at any of us brave enough to open the door, it’s a thing that happens in this house with regularity.

Please tell me I’m not the only one who’s been there. Buying particular spices for one dish and never opening the container again – let alone remembering that you actually have it buried somewhere on you pantry shelves. Yep, that’s me – I’m the girl with three containers of Garam Masala, but will totally run out of something common like chili powder twice in two months.

I’m also a little lazy, so if there’s a way to cut a couple of corners without sacrificing the end result, I’m all about it! A few years ago, I found myself in the middle of a fall baking marathon and realized I was out of Pumpkin Pie Spice. 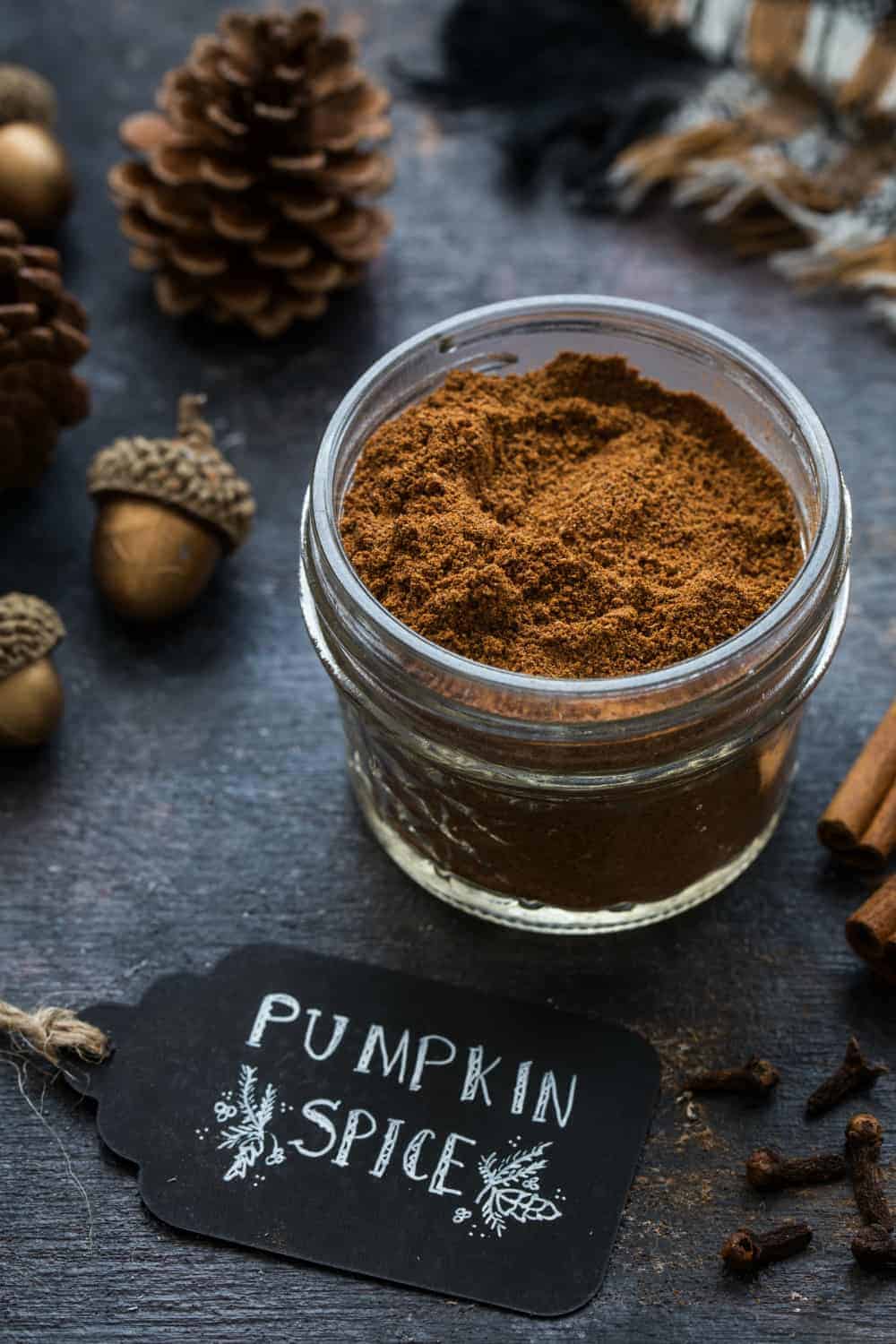 My first instinct was to head to the store – but then that aforementioned laziness kicked in and I figured – wait a sec, I bet I can make this myself. And I did and it was splendid.

This laziness-turned-inspiration is not unprecedented. I also make my own chili/taco seasoning, after running out on a rainy taco Tuesday when a grocery store run was not in the cards. It’s pretty darn rocking, and this pumpkin pie spice is equally as fantastic! 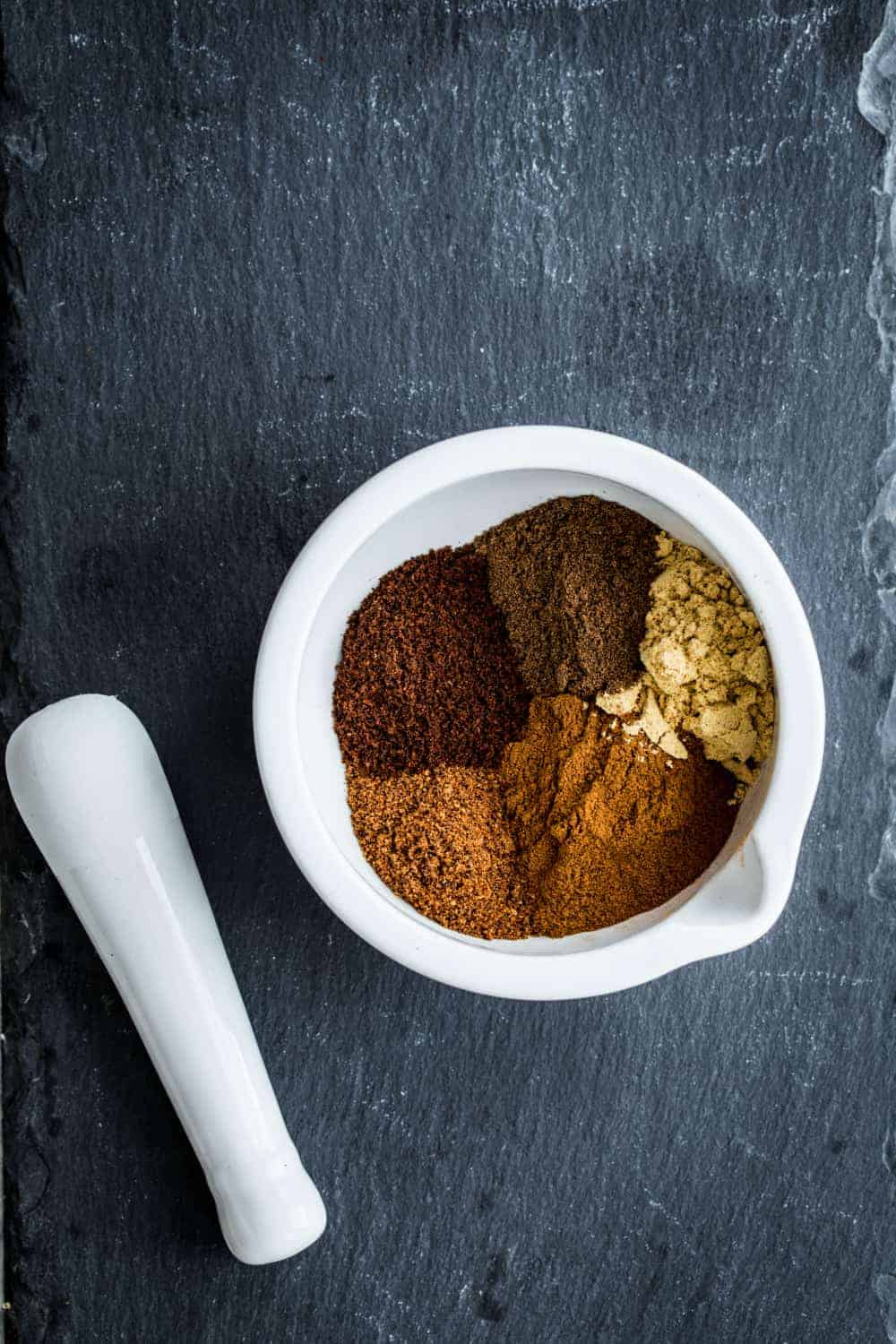 WHAT IS IN PUMPKIN PIE SPICE?

Pumpkin Pie Spice is just a combination of those yummy “warm” spices that we all reach for in our fall and holiday baking.

Now whenever a recipe calls for the typical blend of fall spices like cinnamon, nutmeg, etc. I toss in a couple of teaspoons of this homemade pumpkin pie spice.

It’s better than any pre-made version that I have found and since you probably have all the spices on hand, it’s a little thrifty. And we all like thrifty, right?

Plus, when you make it at home, you know for sure that those spices are all that’s in it -nothing else! 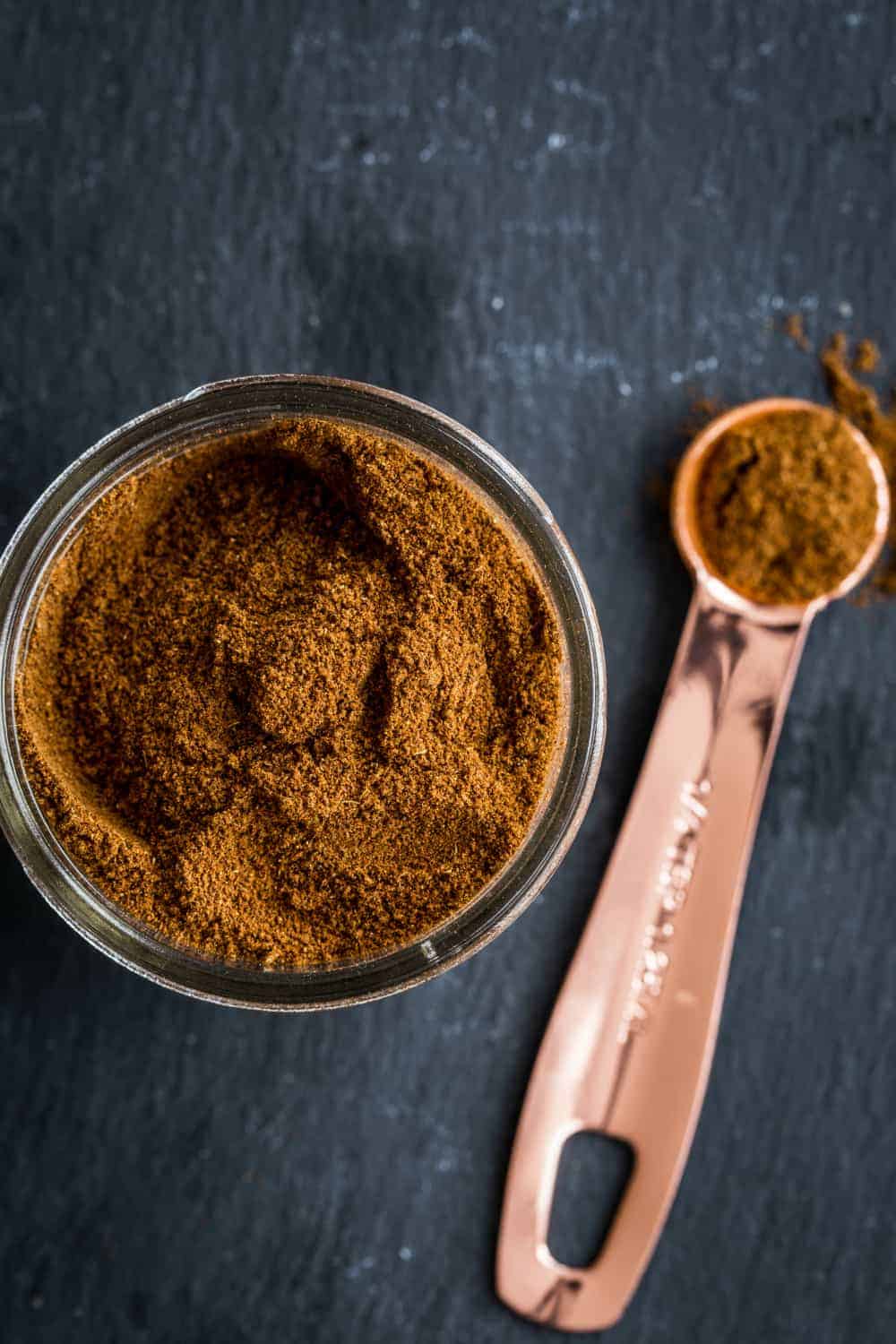 HOW TO MAKE PUMPKIN PIE SPICE

Making homemade Pumpkin Pie Spice is as easy (or, if you’re like me, tricky) as locating the 5 spices in your pantry.

I measure all of the ingredients into a small Weck jar, seal it up and give it a good shake to ensure it’s well incorporated. Then you can smack a label on it and you’re good to go.

Or if you’re momentarily obsessed with adhesive vinyl (that’d be me), you can go that route and cut out a nice font for your homemade pumpkin pie spice.

Just store it in your pantry as you would any other spice and you’ll have all the flavors of fall at your fingertips.

You can even make your pumpkin pie spice a bit more customized by bumping up the ginger and cloves, for a sharper, more robust flavor, or go light on those and amp up the cinnamon for a softer flavor.

When you make it yourself, you can make it JUST right, and that’s worth doing at least once every fall. 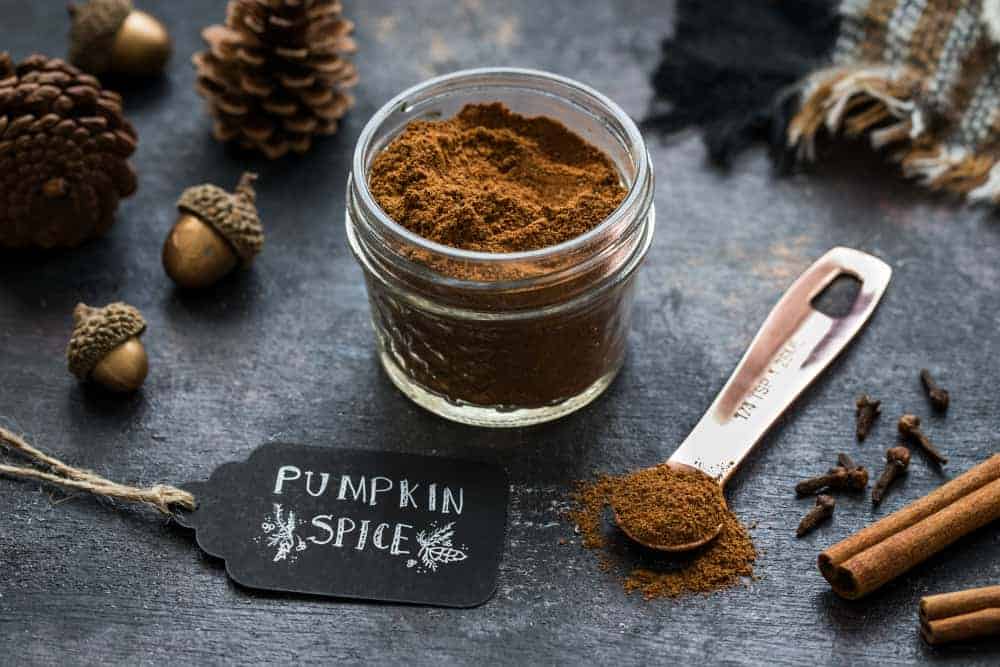 Now that you’ve made homemade Pumpkin Pie Spice, it’s time to use it in a recipe!

Pumpkin pie is an obvious choice. I like a twist on traditional pumpkin pie, such as Mini Pumpkin Pies and Marshmallow Pumpkin Pie.

Homemade Pumpkin Pie Spice is also perfect in breads and cakes! Pumpkin Roll is a Thanksgiving staple in our family, as is Pumpkin Bread.

This post for Pumpkin Pie Spice was originally posted in September 2011. It has been updated with new photos and text, but the recipe remains the same.

I love the idea of homemade spice mixes to give as gifts. What size spice jars should I buy? Thank you!

Hi Virginia – That's really up to you and how much you want to give. The little 4-ounce mason jars are a nice size, I think, but you could get any size spice jar you like! Happy baking! -Jamie

Omg. So good. I grated fresh nutmeg (cus that’s what I had on hand) and ground up whole cloves in my coffee/flaxseed/whatever-else-I-use-it-for grinder. Used in the copycat Starbuck’s pumpkin loaf recipe by MASHED. Yummmmmm. Thank you!

Looking to make up some spice mixes to take with me When I leave to work in Northern Canada. This one is a perfect balance of spices and will taste nice in October for Thanksgiving and Hallowe’en treats.

Thanks so much for stopping by, Bernadette! I appreciate you taking the time to comment. Happy Baking! -Jamie

Great recipe! I made it according to your recipe and the taste is great! Everyone in the family likes it, it makes me happy. Thank you

So happy to hear you enjoyed the recipe! Thanks so much for stopping by and leaving your feedback! -Jamie

I like to add a teaspoon of cardamom to my PP spice mix, sometimes a pinch of Chinese 5 spice mix to it as well

Thanks so much for stopping by, Adrienne! I appreciate you taking the time to comment. Happy Baking! -Jamie