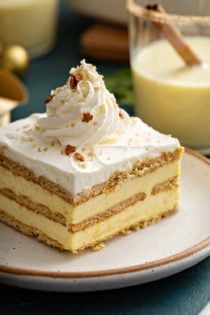 Eggnog Eclair Cake is a super easy dessert for eggnog lovers! This icebox cake comes together in minutes and is perfect for the holidays.

I know it’s really last minute to be throwing another must-make holiday recipe at you, BUT if you like the flavor of eggnog, this super simple Eggnog Eclair cake is for you!

Not only is it easy to make, it’s absolutely delicious – especially if you love the flavor of eggnog, but can’t get on board with chugging the stuff out of a glass.

It comes together in less than 10 minutes with only a handful of simple ingredients, so you can totally whip it together in between wrapping gifts and baking cookies.

I promise, you will absolutely love it and people will be asking you for the recipe after their first bite!

People seem to have super strong feelings about it one way or the other.

I’m actually kind of in the middle. I personally could not drink a glass of eggnog, but I really love the flavor of eggnog. So recipes made with eggnog are right up my alley.

I’ve been on a real eclair cake kick this year. From Banana Cream Pie Eclair Cake and No-Bake Cheesecake Eclair Cake to Pumpkin Eclair Cake, I’ve been having a lot of fun coming up with new flavor combinations.

So obviously I had to whip up an eggnog version just in time for Christmas.

Just like my other eclair cake recipes, you can put this simple dessert together in just a few minutes. Just make sure it has time to chill before serving and you’re golden!

Because let’s be real: at this point, complicated desserts are just not happening. It’s time for super easy and super delicious.

HOW TO MAKE THIS EGGNOG ICEBOX CAKE

Our eclair cakes usually just use milk, but we’re using a mix of milk and eggnog in this version. We’re also adding some cinnamon and nutmeg (and using cinnamon graham crackers!) for that extra bit of eggnog flavor.

In a bowl, whisk together the pudding mix, milk, eggnog, and spices. Then add in a tub of thawed whipped topping until thoroughly combined.

Line the bottom of a 13×9-inch cake pan with a layer of cinnamon graham crackers.

I have found that, depending on the brand of graham crackers I’m using, sometimes I have more gaps between my graham crackers than others. Don’t worry if there are some gaps; your cake will turn out just fine!

Spread 2 additional cups of whipped topping on top. Chill for at least 4 hours before cutting and serving.

I like to top this eggnog cake with some whipped cream and some sparkling sugar, but you could also top it with more cinnamon or nutmeg if you like!

Whether you like to drink eggnog or you just like to bake with it, there are plenty of ways you can still enjoy some eggnog before the holidays are over! Give one (or all!) of these eggnog recipes a try and enjoy feeling ultra festive. 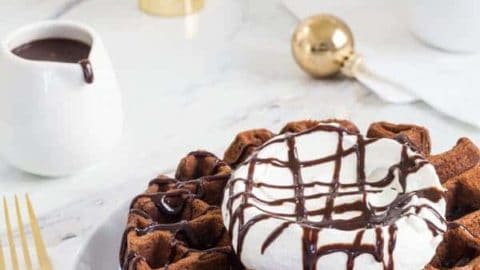 Chocolate Eggnog Waffles are a warm and cozy way to welcome the holiday season. Don’t forget the whipped cream! 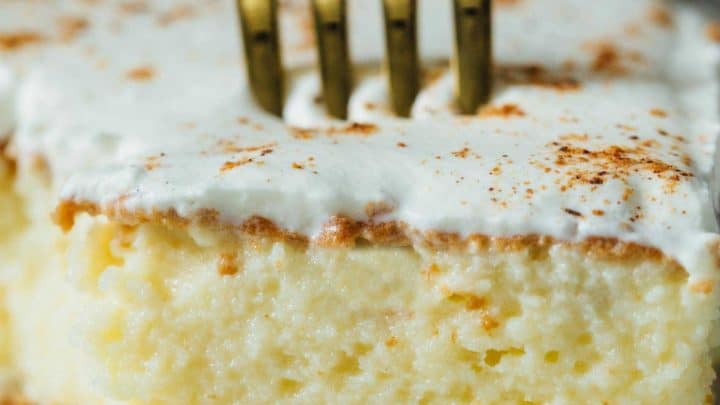 Tres leches cake is so light, airy, and full of flavor. Add eggnog during the holidays and you've got yourself the perfect celebration cake! 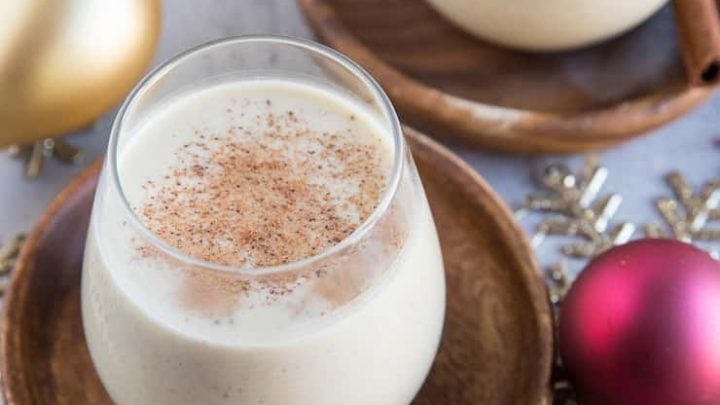 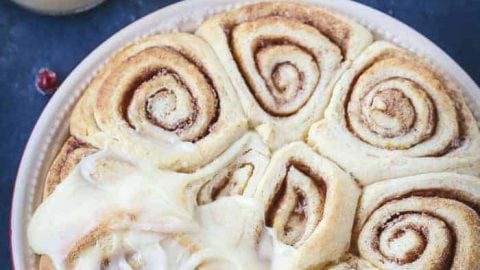 These sweet eggnog cinnamon rolls are perfect for breakfast or brunch this winter. 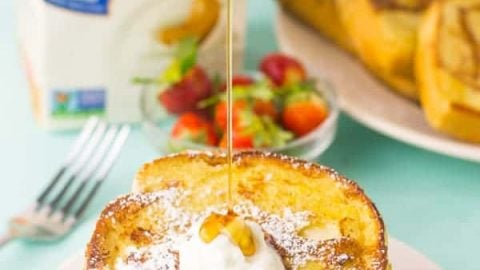 This Eggnog French Toast is an incredibly simple and easy to make Christmas breakfast that is ready in 25 minutes! 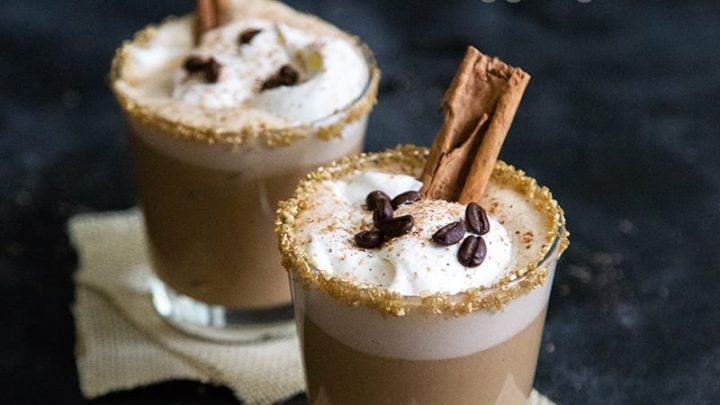 Traditional eggnog spiked with bourbon with a kick of espresso and all the warm flavors of chai. This Dirty Chai Eggnog will soon be a family favorite!

Yum!! This looks amazing, and I can’t wait to try it! Wanted to let you know there might be a miscalculation with your nutrition facts though. My husband counts calories to help watch his figure ;) and 90 didn’t sound quite right to me. I did a rough calculation and came up with about 325 calories (if cut into 12 squares as your photos show, or 245 if cut into 16). Maybe I’m way off, but wanted to throw it out there in case anyone else looks at labels!

I made your classic eclair cake this fall but substituted homemade whipped cream and homemade chocolate ganache, and it was a HUGE hit, so I am definitely excited to try this eggnog version!!! Thanks for the inspiration! :)

Thanks so much, Ali! I'll check the program we use and see if there is a glitch with the info.

For all you bourbon lovers, we made it with Evan Williams eggnog and everyone LOVED it! We upped the amount of eggnog (YAY!), used some vanilla whole milk yogurt and then whole milk to get the total amount of liquid! It set up just fine! Wouldn't serve it to kids though, unless you want them to take a nap! ALSO, used a bread saw to trim the graham crackers to make it look perfect since we didn't top it with the cool whip, just whipped cream as it was served. It was lovely, so easy to make and obviously, not a fussy recipe! THANKS!

I am so happy to hear you enjoyed the recipe, Anna! Love the tweaks you made! Happy New Year! -Jamie

I agree with Diane. Between social tabs, ads, video pop-ups, heart and share buttons its hard to great through the recipe. There's gotta be a way to get your ads and extra buttons on your page without it being so obtrusive.

Otherwise I'm loving what you put together here. Your recipes are very tempting! New fan!

Aixa- Hi! There is a "jump to recipe" box at the top of the post. If you click that, it will help you bypass most ads. Unfortunately, ads are necessary to offset the cost of running a blog which can be quite expensive. We understand ads can also be annoying which is why we added the "jump to recipe" feature a few months back. Take care & Happy Holidays to you and yours! -Jamie

Question: can one use eggnog with alcohol in it? Like, the premixed Evan Williams eggnog? My whole family loves the stuff so I'm going to try it. Fingers crossed.

Also, I must agree with another person who commented, the ads on your site are truly bothersome. Your recipes are amazing, but the pop-up ads are too much.

Hi Anna- I have not tried this recipe with eggnog that already includes alcohol, but I think it would be just fine. Thanks for your feedback on the ads, I am looking into it with my ad management company. Happy Holidays to you and yours. -Jamie

The Eggnog Eclair c a ke looks wonderful, but does not give amounts of milk, eggnog, spices and whipped topping. HELP!

Hi Janet- All of the measurements are there, so I am not sure why you can't see them. Try this link which will take you right to the printable page. https://www.mybakingaddiction.com/wp-json/mv-create/v1/creations/1004/print Hopefully this helps. Happy Holidays! -Jamie