These gluten-free chocolate chip cookies are perfectly soft and chewy and are sure to rival your current favorite!

Before trying these gluten-free chocolate chip cookies, I hadn’t really found a gluten-free version that I loved just as much as the traditional kind with gluten. My previous attempts were either gritty or lacking in chewiness. Being as I don’t have any issues with gluten, I decided to just be lazy and go back to making my favorite recipe. 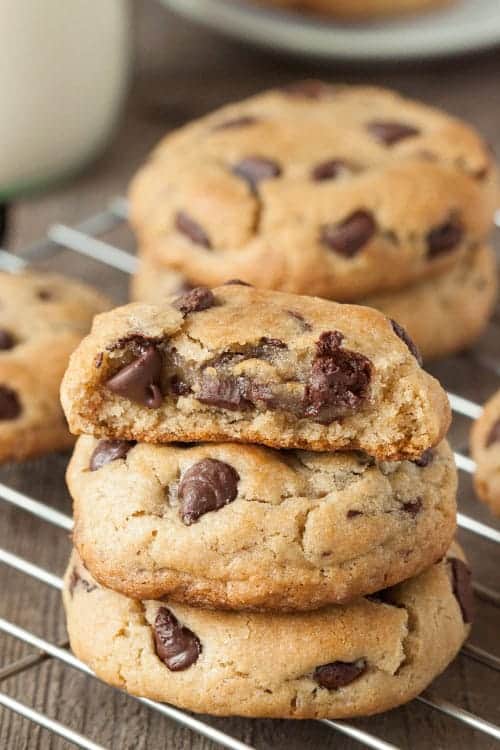 So I found a recipe for gluten-free chocolate chip cookies on the Land O’Lakes website that looked really promising, but I did a few things more like in the original NYT recipe since my goal was to recreate those. First, I refrigerated the dough for 24 hours, which contributes to the awesome texture of the NYT cookies. Then, to get mega-sized cookies, I weighed out 3 1/2-ounce balls of dough. When they came out of the oven, they looked absolutely gorgeous but when I bit into them, I was totally disappointed.

They were extremely gritty and cakey. I remade version after version, all coming out dismally, until I finally decided to just follow the instructions in the original Land O’Lakes recipe. And they came out perfectly! 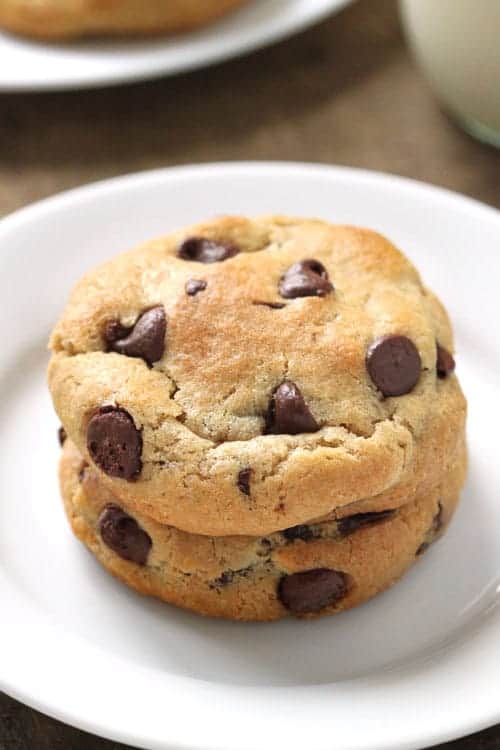 They’re not as monstrous as the New York Times cookies, but they’re just as chewy and tasty and there’s absolutely nothing funky going on with the texture. I shared them with a few people and nobody had a clue that they were gluten-free. And as a bonus, you don’t have to chill the dough because it doesn’t have any effect on the texture.

I’ve provided gram measurements for the flour and recommend using them if you have a scale. Most people measure flour a little differently and when it comes to gluten-free baking, which can be a little more finnicky than traditional baking, I much prefer to weigh the ingredients to ensure success. As far as making substitutions for the gluten-free flours listed, I’ve only tested these with the listed flours so I can’t say if any others would work or not. If you experiment, let us know how it goes in the comments!

For more delicious gluten-free recipes, be sure to check out this Gluten-Free Strawberry Rhubarb Crumble and these Gluten-Free Lava Cakes!

1. Preheat the oven to 375 degrees F. Line a baking sheet with a piece of parchment paper.

3. In a large mixing bowl using an electric hand mixer or a stand mixer fitted with the beater blade, beat the butter, brown sugar and granulated sugar until light and creamy. One at a time, add the eggs and beat until well combined. Add the vanilla and then gradually add in the flour mixture. Beat just until combined. Stir in 1 1/2 cups chocolate chips.

4. Form balls of dough, about 50 grams or a little less than 3 tablespoons in size, and roll the tops and sides of the balls in the remaining 1/2 cup chocolate chips. Place the balls 2 1/2" apart on the prepared baking sheet.

5. Bake for 9-12 minutes or until lightly browned and the surface no longer appears wet.

6. Let cool for 5 minutes and then remove to a wire rack to cool completely. Store in an airtight container for up to 4 days.

This is my first time making these and WOW! They turned out just like regular cookies! I’ve avoided making chocolate chip cookies because they always turn out “gritty” but these were perfect! I only had King Arthur gluten free all purpose flour which already has the xanthum gum in it. So I used 1 3/4 cups of that and a 1/2 cup corn starch. 10 min and PERFECT! Thank you! My husband will be so happy to have his favorite cookies again!

I'm so glad you loved the cookies, Kimberly! Thanks for stopping by and sharing your feedback! Happy baking - Jamie

Thanks for the great recipe! I used the Gluten Free flour mix from Trader Joe’s and they turned out delicious!  Almost indistinguishable from regular chocolate chip cookies. Thanks for sharing!

So happy to hear you loved them! Thanks so much for stopping by and leaving your feedback! -Jamie

These are excellent! I did substitute brown rice flour for the white and cornstarch for the potato starch(it is what I had on hand) I am not used to cooking gluten free so was worried. No problem though. Thank you!

Sounds great, Carol! Thanks so much for stopping by. Happy Holidays to you and yours! -Jamie

I could not find potato starch. Is there anything that works as a substitution for that?

Hi Erin!  I really want to make these because it sounds like you’ve nailed the recipe!  One question. My son is also allergic to eggs.  Can you recommend an egg substitute that wont totally ruin this recipe?  I typically use Flax but if you have another suggestion I’d love to hear it. Thanks in advance for your help!