Soft and chewy oatmeal cookies are sandwiched together with delicious vanilla buttercream to create the perfect dessert. Forget Little Debbie, fresh, homemade Oatmeal Cream Pies are where it’s at. 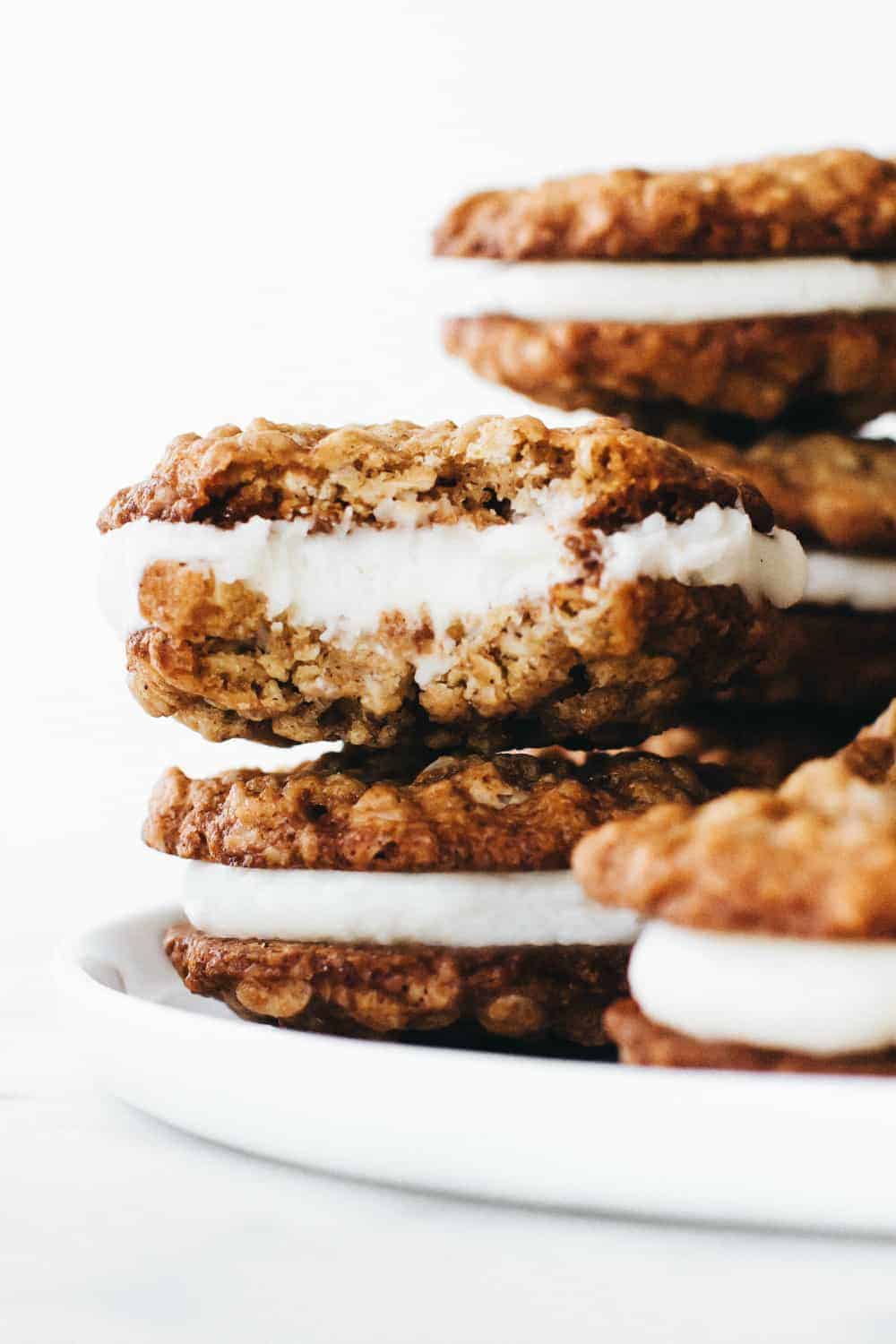 Oatmeal Cream Pies are one of those store-bought items that I simply can’t have in the house.

I loved them as a kid and even had them on my weekly shopping list in college – which totally contributed to the freshman twenty.

There’s just something about soft oatmeal cookies sandwiched together with a layer of sweet frosting that makes me happy and nostalgic.

Do you remember opening up that crinkly plastic wrapper and getting hit with the sweet, oaty smell of those super soft cookies and delicious frosting?

Someone should totally make a candle that smells like that.

I had to permanently remove them from my shopping list when I found myself noshing down on an entire box of them in a matter of a few days. 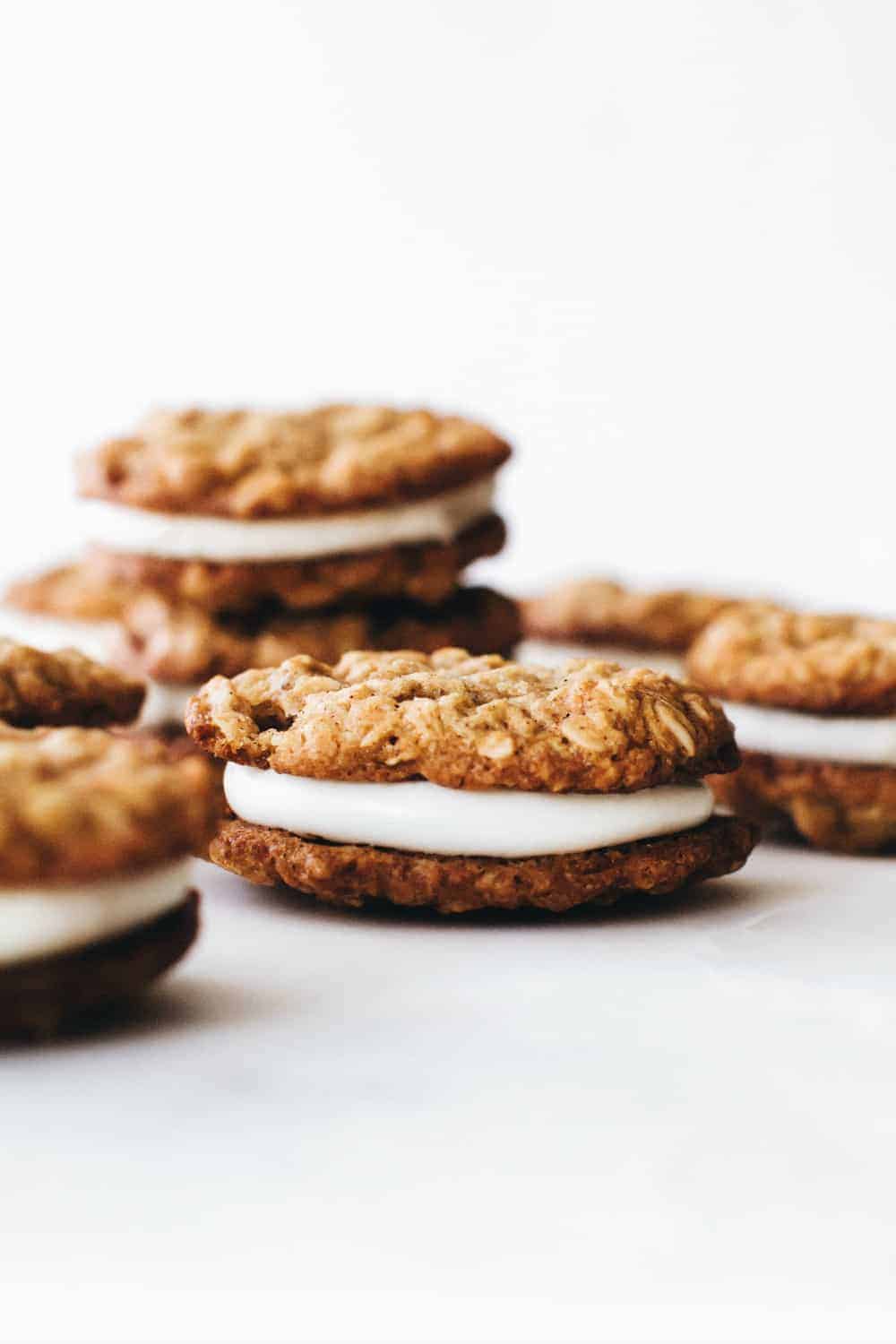 If you haven’t had an oatmeal cream pie in awhile, allow me to remind you that there are 12 oatmeal cream pies in a box, so I was getting down with those suckers in a serious and not-so-good-for-me kinda way.

They’d pretty much fallen off my dessert/snack radar for years until last month when I stopped into a local bakery to pick up a cake.

Keeping it even more real, this baking blogger bought a cake for her stepmom’s birthday. Sometimes life gets the best of you, and a bakery is just the way to go, friends.

The lovely girl who owns the bakery greeted me a gorgeous ombre rose cake and an oatmeal cream pie the size of my face.

The thing was crazy big, so I broke a not-so-tiny piece off and passed the rest off on my mom.

But then I immediately added giant, homemade oatmeal cream pies to my must-bake recipe list.

And since bigger is always better when it comes to oatmeal cream pies, I wasn’t messing around with small, flat oatmeal cookies. 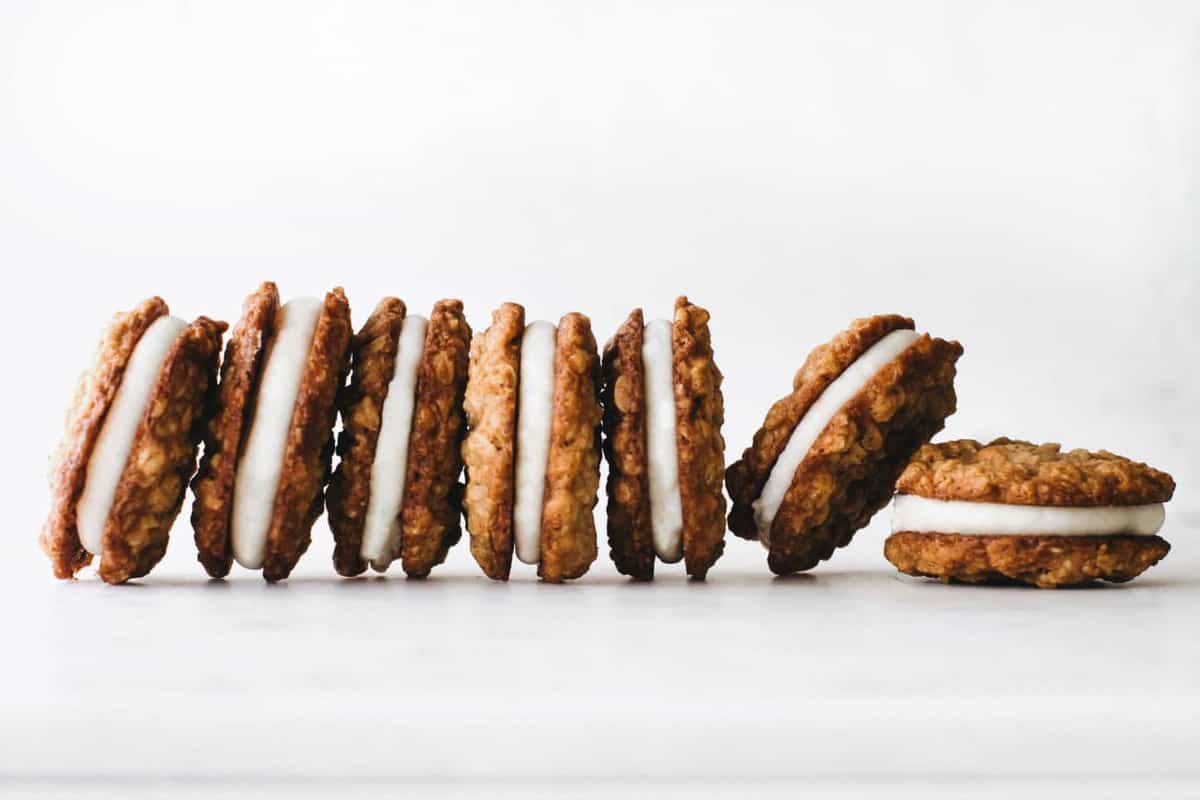 They’re slightly crisp on the outside and perfectly chewy on the inside, which makes them perfect for sandwiching together with a generous slathering of vanilla buttercream.

My whole house smelled like that candle I want someone to make, and it. Was. AMAZING.

Eric had been out at the gym, and when he walked in the door, I believe he exclaimed, “OMG WHAT did you bake?!”.
This house is never short on good baking smells, so that’s saying somethin’, folks. 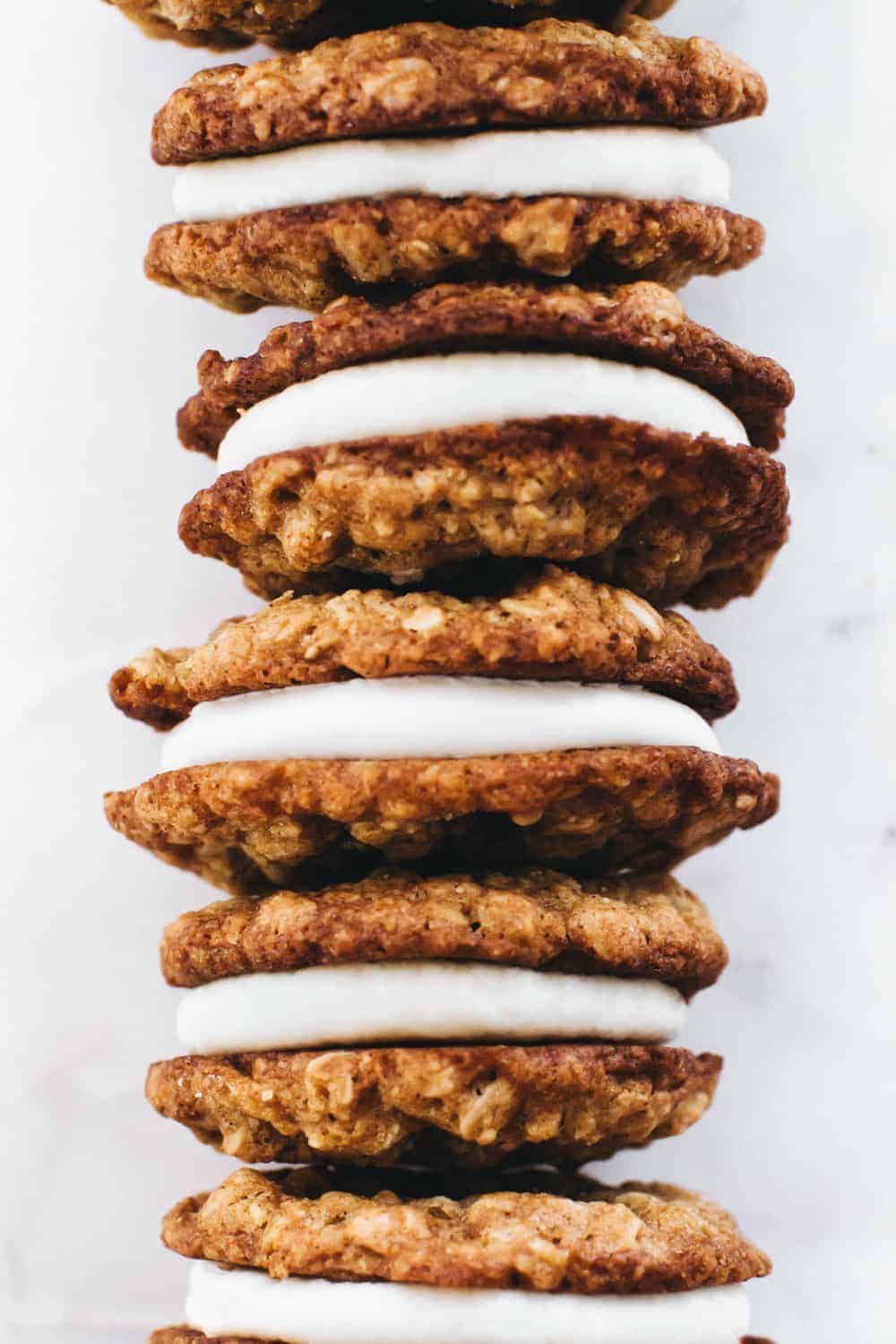 These homemade oatmeal cream pies would be fantastic for taking along to summer picnics and potlucks because they travel easily and well.

They’re sure to be crowd pleasers – have you ever known anyone to ever turn down an oatmeal cream pie, let alone a homemade one? Doubtful.

You’ll be a potluck hero, for sure! 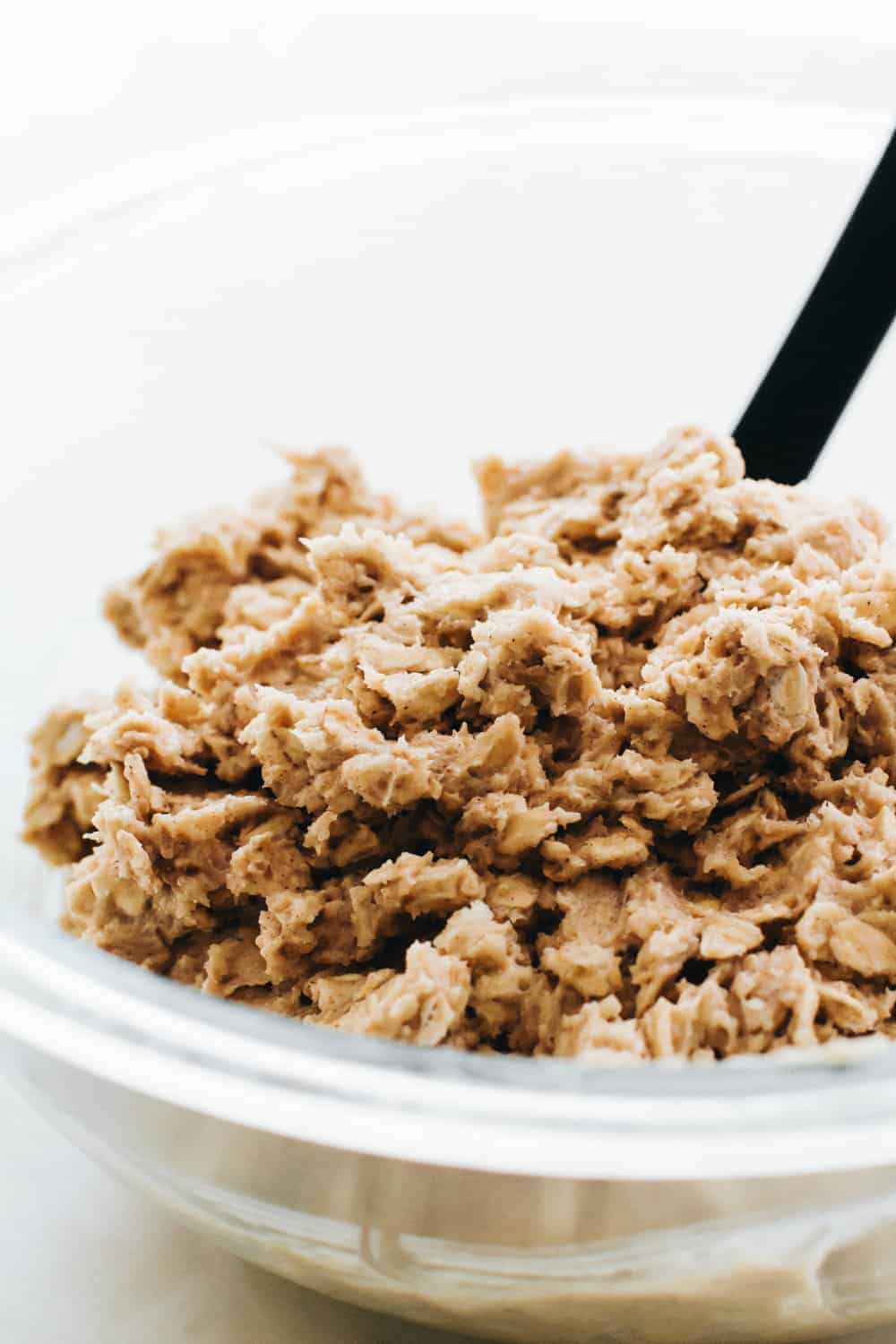 One of my favorite things about these Homemade Oatmeal Cream Pies is that I know what the ingredients are.

I don’t know if you’ve ever looked at the ingredients list on the store-bought version but…it’s not great.
I’ve definitely been known to let my kid indulge in store-bought snacks and there’s a time and a place for everything. But if I can give her a homemade version that tastes better and has a better list of ingredients? 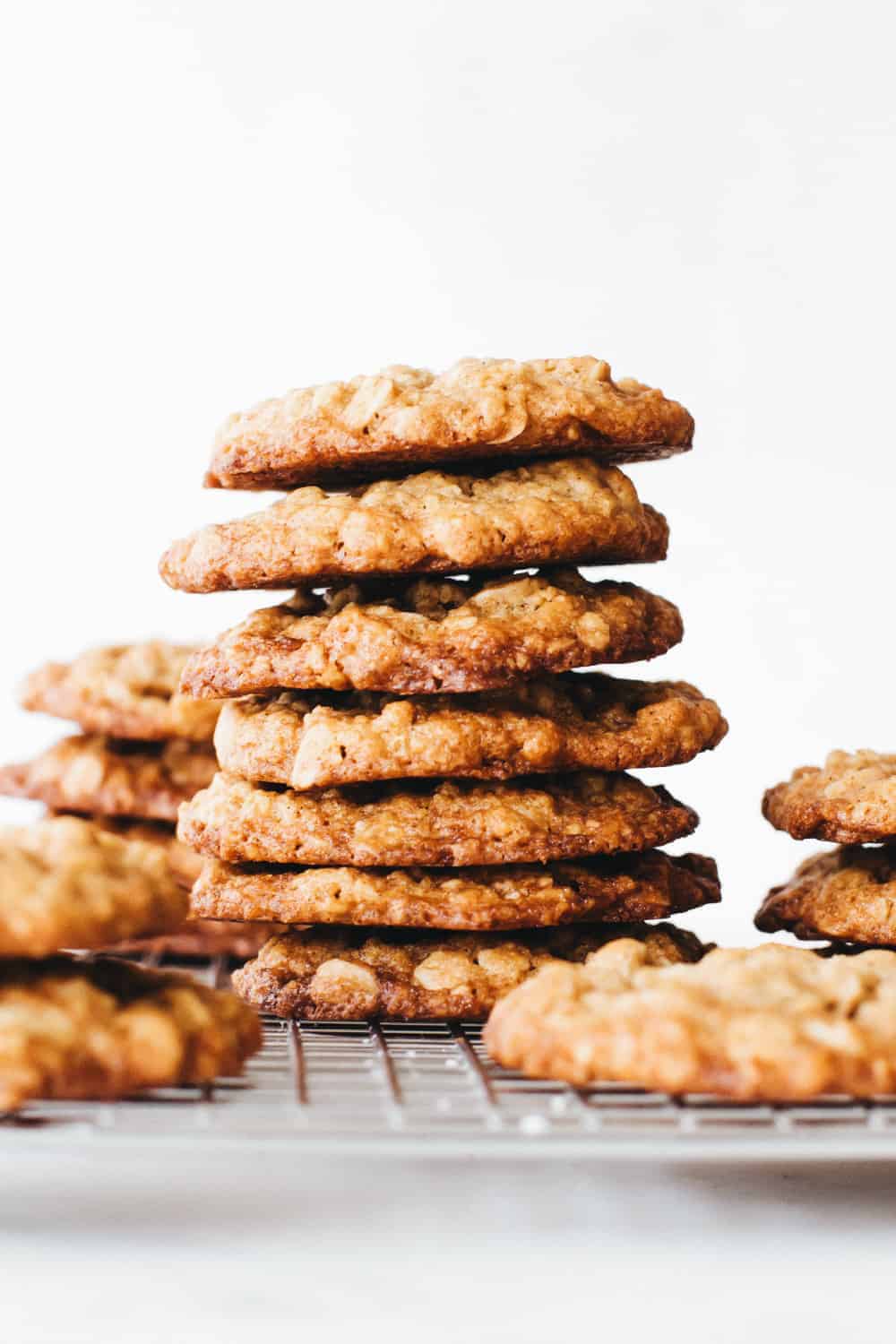 I’m gonna call that a win. 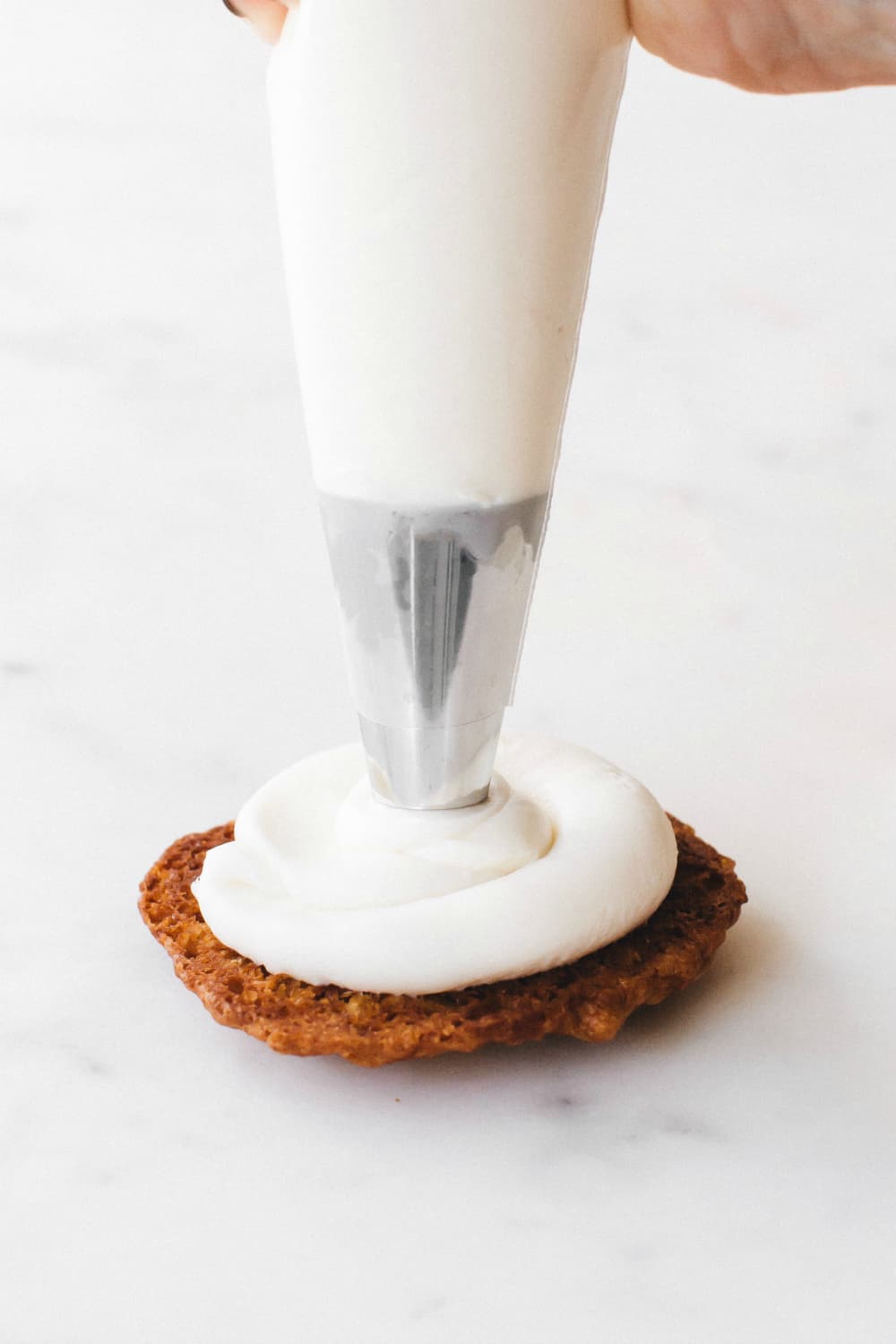 That recognizable ingredients list applies to the oatmeal cream pie filling, too.

The filling for our Homemade Oatmeal Cream Pies is basically a buttercream frosting. The key is to beat the butter for 5 full minutes.

I know it seems like a long time, but it’ll make the buttercream filling extra fluffy. 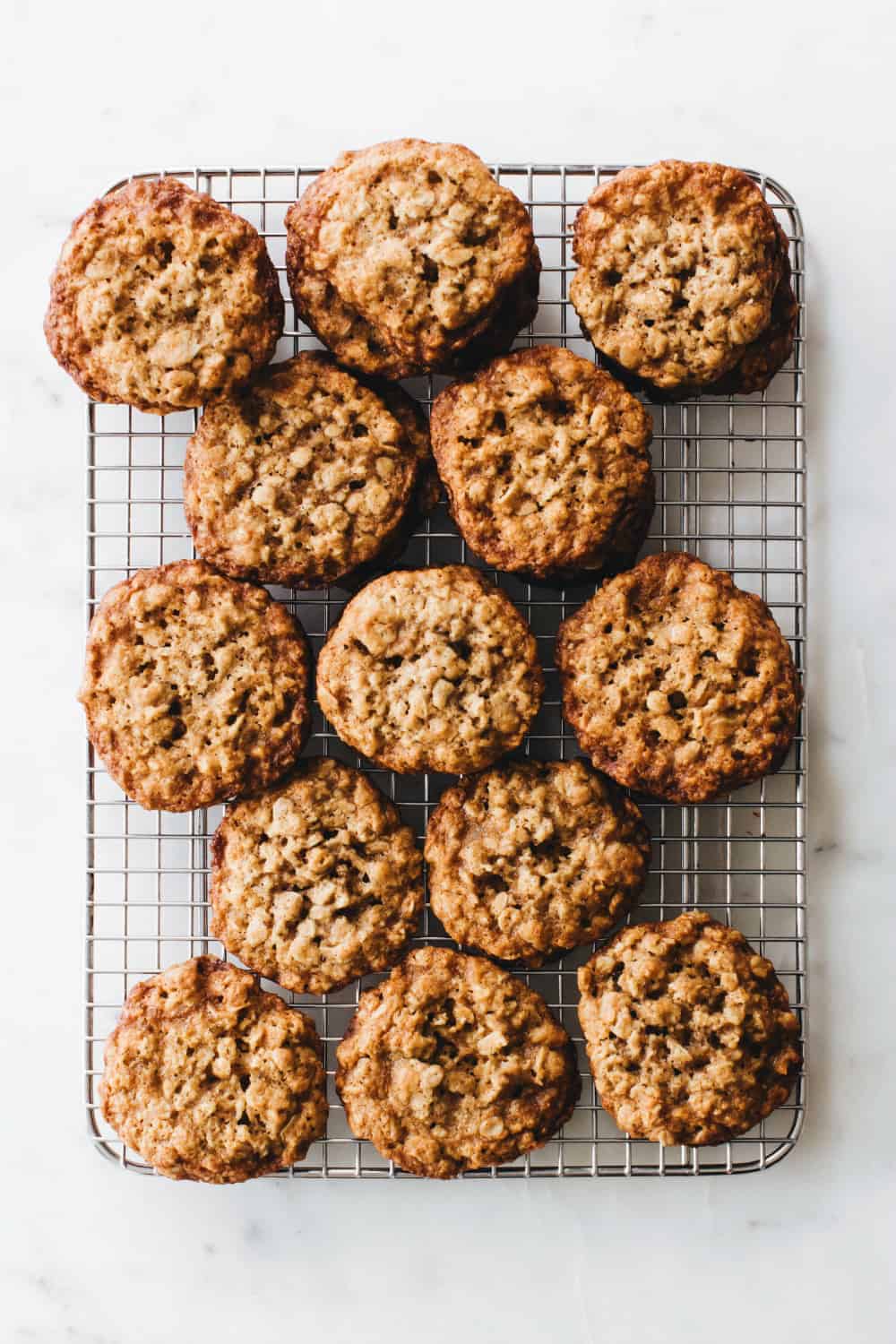 I like to use a piping bag to add the filling to the cookies, but you could also use a small offset spatula to spread on the filling instead.

Make sure you only pipe or spread the filling in the center of the bottom cookie, leaving ¼ to ½ an inch around the edge of the cookie. When you add the top cookie, you’ll press down slightly and the filling will come right to the edge of the oatmeal cream pie without coming out the sides! 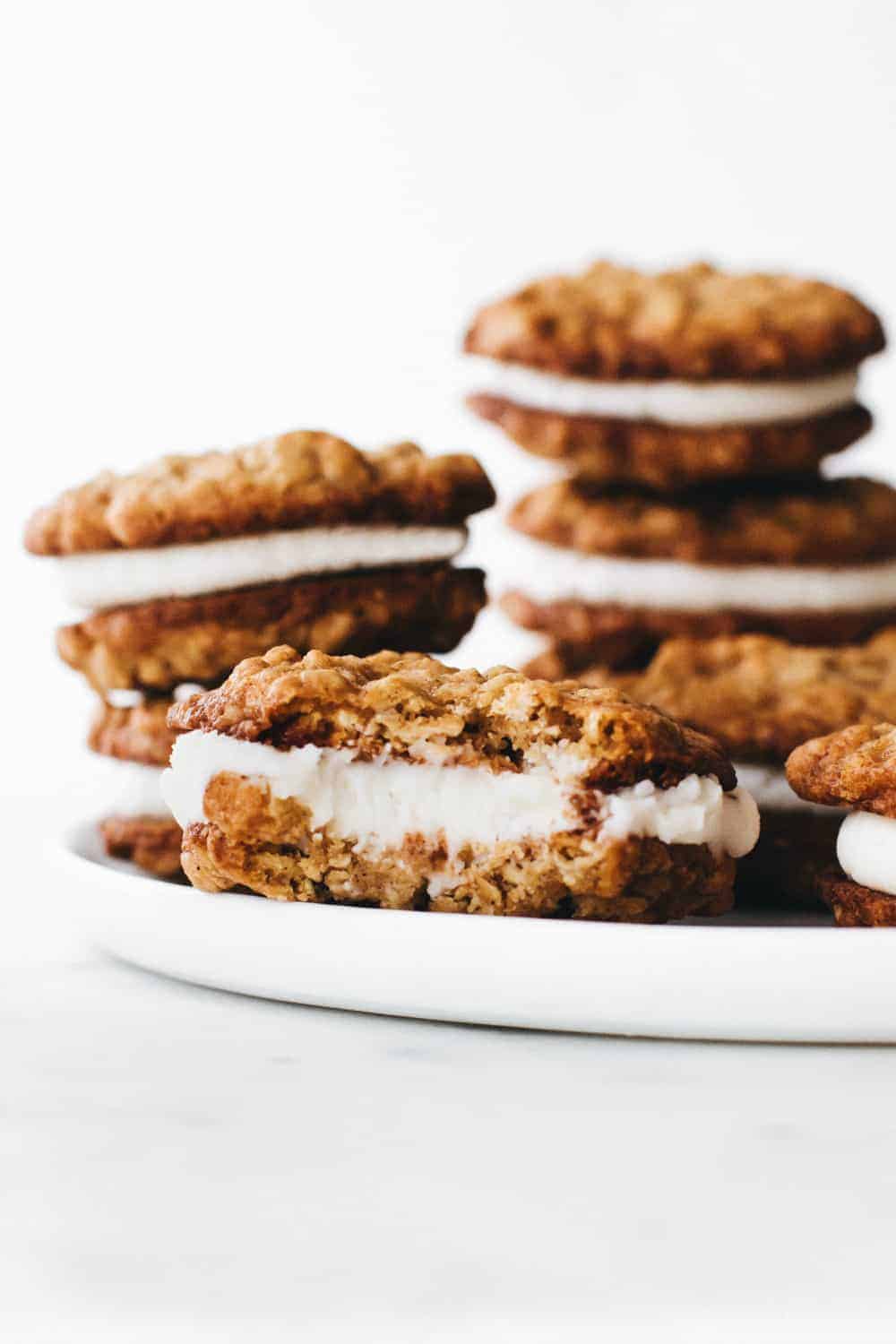 Store your Homemade Oatmeal Cream Pies in an airtight container in the refrigerator for up to 3 days.

Homemade Oatmeal Cream Pies will taste best and the filling will have the best texture if you let them sit at room temperature for about an hour before serving. 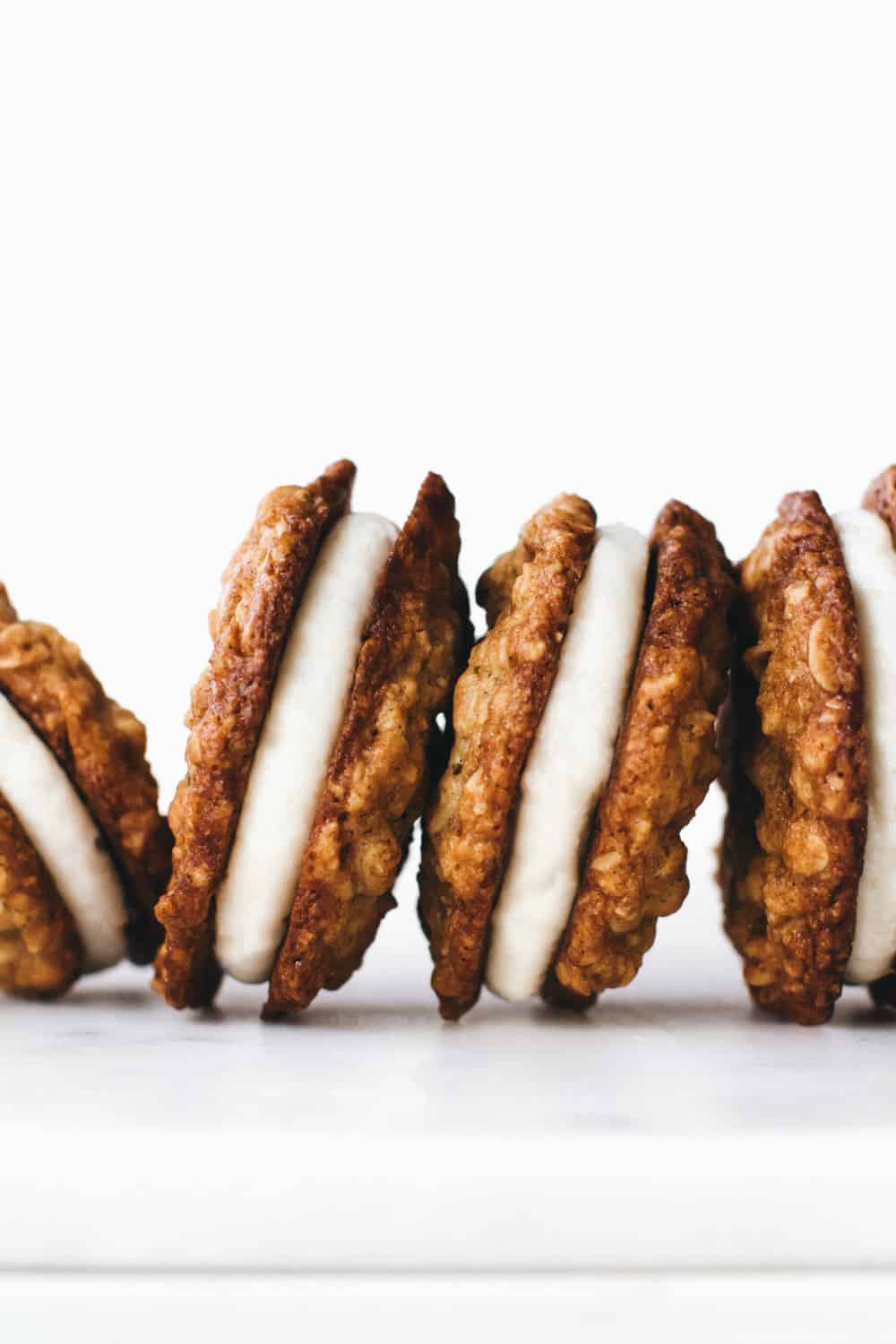 For the Cream Filling

I never comment on recipes, but I LOVE this one. I subbed gluten free ingredients because I’m celiac and they came out so good. I’m not sure I will ever want to bake anything else.

Hands down my new favorite cookie. Made as written using quick oats. I did use a small cookie scoop and flattened them out just a touch. Unbelievably delicious.

So glad you enjoyed these, Kelly! Thanks so much for stopping by and sharing your feedback. Happy baking! Jamie

These are amazing! Hubby loved them too.

So glad you and your husband both enjoyed these! Thanks so much for stopping by and sharing your feedback. Happy baking! Jamie

The actual cookie part was amazing. But for some reason the filing came out super runny! And i added so much powdered sugar to thicken it but it did not work. But would definitely try again!

I'm glad you enjoyed the cookies, Stephanie. I'm sorry the filling gave you trouble; I hope you'll give them another try! Happy baking – Jamie

omg!!! it turned out so yummy and perfect!! i made the first batch of cookies with the large ice cream scoop and the cookies were huge!! if you wanna go smaller i used a one tablespoon scooper for the rest and it was a perfect little few biter pies! (seven minute cooking time). thank you for the delicious recipe :)

So glad you enjoyed the recipe, Madison! Thanks so much for stopping by and sharing your feedback. Happy baking! Jamie