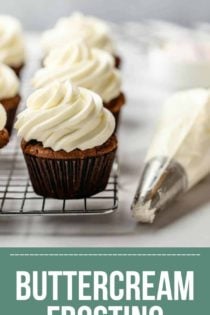 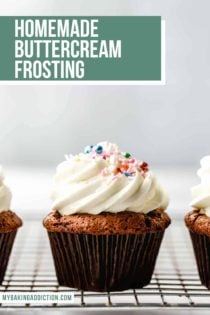 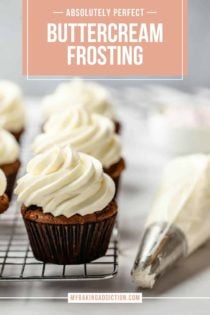 Homemade Buttercream Frosting is one of the best basic recipes to have on hand. This classic recipe makes enough pillowy frosting for 24 cupcakes or a 9-inch layer cake.

Of all the recipes on My Baking Addiction, this Homemade Buttercream Frosting is definitely the recipe that I make the most in my kitchen. In fact, it’s probably the most requested recipe amongst family and friends – well, maybe the second most requested next to My Favorite Chocolate Chip Cookies.

Whether I’m whipping up cupcakes, cake, or cookies, this Homemade Buttercream Frosting is the perfect way to top just about anything.

I can’t tell you how many times people have said, “I could eat this with a spoon!” And I’ve actually made this for my aunt’s co-worker to do just that. She would put a serving in a little bowl and snack on it while watching her favorite TV shows.

One of the most common questions that I get from my readers is about buttercream frosting.

Although I have made several types of buttercream frosting recipes, this Homemade Buttercream Frosting is by far my favorite due to its flavor, simplicity, and smooth texture. This buttercream recipe can be infused with many different flavors to accompany your baked goods.

There are many variations of recipes for buttercream. I prefer using unsalted butter for the fat component because I find it to be less greasy than buttercream made with shortening.

However, to each their own; if you’re a shortening fan, see the notes in the printable recipe card for this adaptation.

This Homemade Buttercream Frosting is extremely easy to pipe on 24+ cupcakes or a 9-inch layer cake and holds its shape very well.

It will flow easily through a variety of piping tips. My favorite tips are the 1M from Wilton, large round and large French tips.

With this basic homemade buttercream recipe under your belt, you’ll be well on your way to creating cake and cupcake masterpieces.

American Buttercream Frosting – This buttercream is fast, simple and what you see on most grocery store cakes. It’s essentially fat (butter, margarine, shortening), confectioners’ sugar, and vanilla extract whipped together.

Our Homemade Buttercream Frosting is so easy to make, you’ll wonder why you ever bothered buying frosting.

Cream the butter until it is fluffy. This is really the most important step in this entire recipe. I often set a kitchen timer for 6-7 minutes and just let my KitchenAid Stand Mixer do all of the work. Then add in the salt and slowly add in the powdered sugar, continuing to beat the mixture until it is well blended.

There are lots of different ways to flavor Homemade Buttercream Frosting. Of course there is always the classic vanilla extract, vanilla paste or vanilla beans. You guys know I am obsessed with vanilla everything and always use pure vanilla extract; however, this buttercream is the exception.

More often than not, I turn to Wilton’s Clear Vanilla Extract for this recipe. It keeps my homemade buttercream frosting super white and has the perfect, yummy, creamy vanilla flavor that is simply my favorite in buttercream.

USES FOR THIS FROSTING

There are a million different ways to use homemade buttercream. The most obvious is for frosting cakes or cupcakes. This recipe will make enough frosting to generously cover 24 cupcakes or a 9-inch layer cake.

You can also put your homemade buttercream inside your cupcakes! Try using one flavor as a cupcake filling and a second flavor on top.

It also makes a fantastic filling for sandwich cookies. Homemade Oatmeal Cream Pies are perfection thanks to a buttercream filling.

Really, Homemade Buttercream Frosting can be used for anything that has frosting on top! Think Strawberry Rice Krispie Treats, for example.

Homemade Buttercream Frosting can be made a few days ahead of time, so it’s easy to prepare before a party and pipe onto a cake or cupcakes the day of.

Cover and refrigerate Homemade Buttercream Frosting for up to three days. When you’re ready to use it, simply bring it to room temperature and beat it for about 5 minutes or until smooth. You may need to add a splash of cream or milk to revive the consistency before piping.

Can you freeze this frosting?

Extra buttercream frosting can also be frozen for longer-term storage.

Place the buttercream in a freezer-safe airtight container. Sometimes I will also place a layer of plastic wrap on the top of the buttercream for extra protection. Freeze for up to a month.

Let the frosting thaw in the refrigerator overnight. Before using, let it come to room temperature and beat it with your mixer for about 5 minutes or until nice and smooth. Add a splash of milk or cream if needed.

Hello again! I went to make this frosting, but of course forgot to take the butter out early. I used your microwave tip and it worked amazingly well. THANK-YOU!! Also the frosting was great. I'm very particular about my buttercream and this is one of my 2 favorites, but my wife likes yours better so it's a winner.

I have been looking for the ultimate buttercream frosting that I can flavor or color for my wedding cupcakes. Thank you so much for this! It is beyond perfect! I used 2 sticks of butter and 8 tbs of Crisco. And omg it's fabulous! I used 1 tsp of clear vanilla and about 4 drops of raspberry flavor I am so happy with this. My husband is not a big sweet eater and he said it tastes gormet! I only have one question...can I freeze the left over and mix into the next batch?

So glad to hear you love the recipe, Candy! Yes, you can freeze this frosting. Just let it come to room temperature and give it a good mix before using it after thawing. Hope this helps! Happy baking – Jamie

Do I just put less powdered sugar in the buttercream frosting to make a less sweet frosting for adult tastes? I am putting fresh berries atop the frosting before it crusts. Thanks, Jamie!

I would be careful about adding less powdered sugar, as it will definitely taste more buttery. You may find that it's better to make it as written and just add less to your cake/cupcakes. Hope this helps! Jamie

Does this frosting hold up in heat?

Hi Amanda – Since the base is butter, it will get soft if it's left out in heat too long. It holds up great at room temperature – if you're taking it somewhere without air conditioning (like a cookout), I would keep the cake or cupcakes in a cooler until ready to serve, just so it doesn't get too soft. Hope this helps! Jamie

How many cups of butter is 3 traditional sticks? I only have a large brick of butter, so I’m not sure how much I should use.