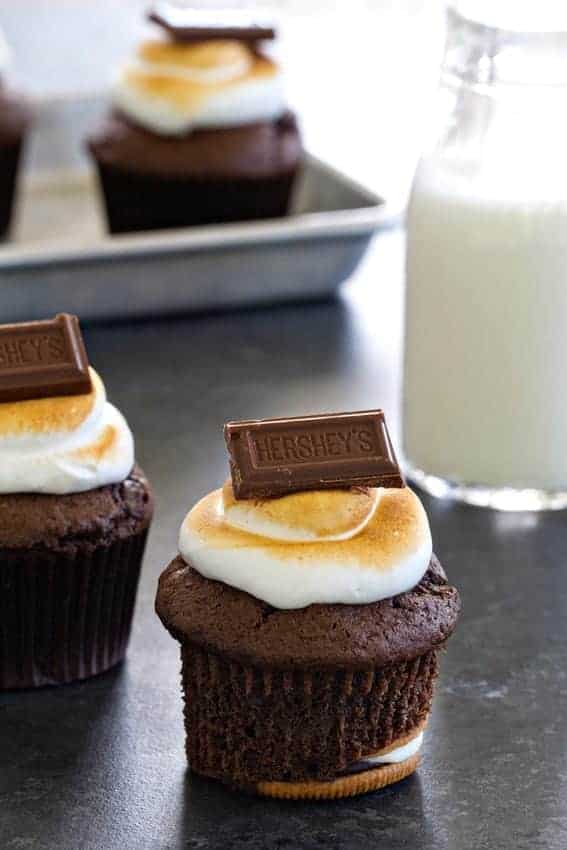 S’mores Cupcakes must be made before summer’s end. They cover all the bases – chocolate, marshmallows, Oreos, and best of all, CAKE.

It’s been years now, friends. Between you and me, if you’ve been hanging out here, you are well aware of the fact that I have a slight obsession with all things s’mores. From No-Churn S’mores Ice Cream to No Bake S’mores Cheesecake, I just can’t get enough of all that melty chocolate goodness. Seriously, I’m obsessed.

Typically I don’t celebrate food holidays because I swear every food has a national day. Where do you draw the line? Come on, even Hot Pastrami gets a entire day of love, which by the way is January 14th, just in case you want to get an early start on your pastrami party planning. 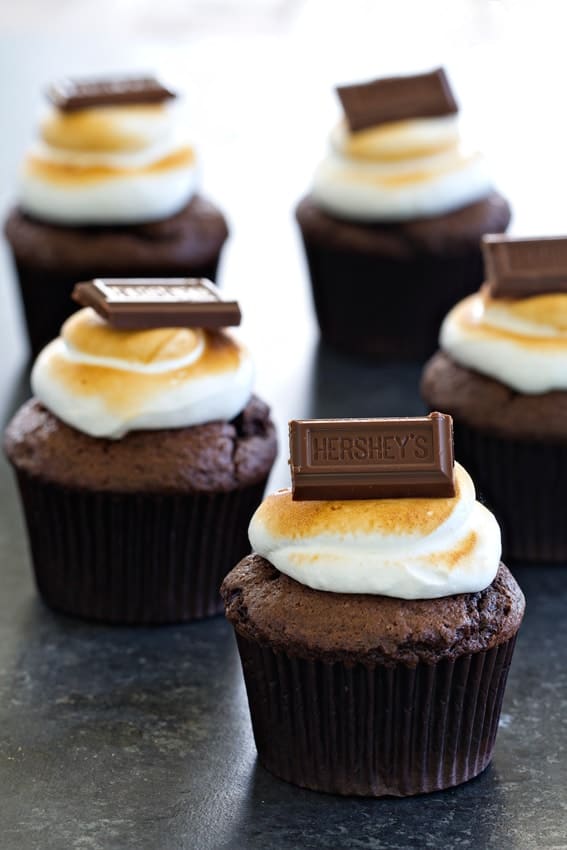 But s’mores? I’m always down with an excuse to eat s’mores. And what kind of s’mores lovin’ food blogger would I be if I didn’t share a recipe on National S’mores Day?

So when I received an invitation to a girl’s night with the neighbors, I immediately started running through random excuses in my head. But making up excuses for meeting neighbors proved to be quite difficult – I mean, they live right next door. I guess I could’ve left the house for the night or hid out in the basement, but I decided to suck it up and attempt to dazzle them with S’mores Cupcakes. 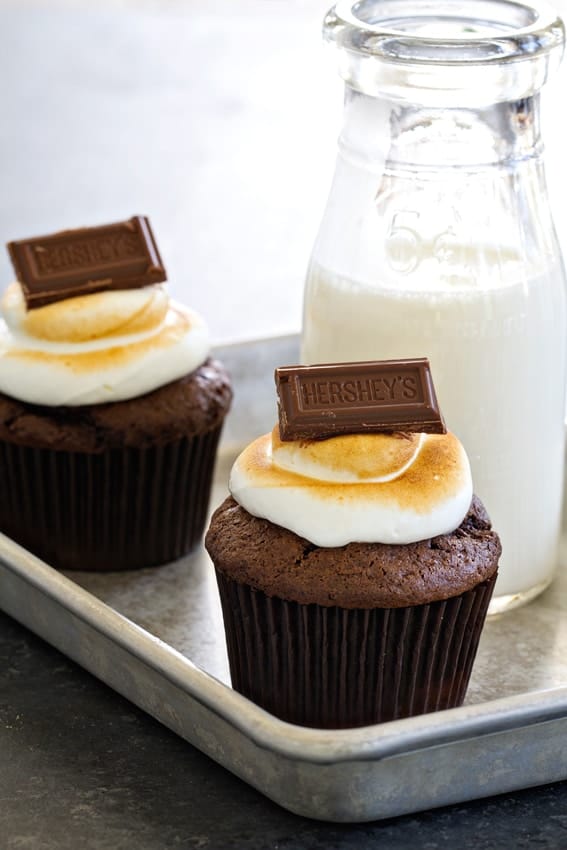 Turns out, I had a great time! And that whole profanity thing? So not a big deal. I just occupied my mouth with the best pita chips and salsa ever – which, come to find out, were made by a 10-year-old. Total future food blogger in the making. I’ve already started the pitch to get her on Word Press.

S’mores Cupcakes start with a S’mores Oreo crust, followed by my favorite doctored up cake mix batter and then they’re topped with marshmallow frosting and a Hershey’s milk chocolate square. Can it get any better?

If you’re awkward like me, these are the cupcakes you take to your next gathering. No need to try and make small talk – everyone’s too busy stuffing their faces with a delicious, delectable cupcake!

If you’re a lover of all things s’mores, be sure to check out my Salted Caramel S’mores and S’mores Trifles!

For the Marshmallow Frosting:

For the Marshmallow Frosting

I was planning to make the smore cupcakes for my baby shower. will the frosting with egg whites hold up for two days?

Hello! The frosting would not hold up for that long; it will be best served the same day. Thanks so much for stopping by. -Jamie

Wow, these look so scrumptious! Definitely would give it a try when my s'mores cravings come. My family doesn't particularly enjoy very sweet desserts. If I cut the sugar by half, would it matter to the recipe? Thank you for the amazing recipe!

Hi, Athena! Try reducing the sugar in the frosting and taste it to see if it's to your liking before you frost the cupcakes. Add a bit more in if you like. I hope you enjoy them!

I just love your recipes,. I use them all the time. I'm making these for a party and I was going to make them on Friday for a saturday party. Could I make the cupcake part Fri and do the frosting on sat? Also I happen to have 2 hershey bars in the fridge. If I use them from the fridge will they get that gray color and sweat? Should I just buy 2 new ones?

Elissa- That is exactly what I would recommend doing re: the cupcake prep. I'm not sure re: the chilled candy bars, so I'd probably recommend picking up a couple of new ones just in case. -Jamie

Can the frosting be piped on the cupcakes and stay out for about 2 days. I have to make 200 for an event and wanted to know if it's safe

Hi, Emilie! I've not made these in advance, but my reaction is that keeping them out for a few days might not be the best idea, especially if the come into contact with any type of humidity whatsoever. I hope your event goes well! Let me know if I can help with anything else.

I made these for my 9th Annual All Girls Camping Trip and they were a huge hit! I changed it a bit... I used your Heath Bar Cupcake cake recipe (my fav!) and couldn't find the cookies so I just made a graham cracker crust. Thanks for all of your great recipes!

So glad to hear you enjoyed the recipe, Zoe! Thanks for stopping by. -Jamie