Well, I made it through my first week back to work. And let me tell ya, hanging out in a second floor classroom while the temps soared to the mid-nineties had me begging for fall temperatures or a rather large air conditioning unit.

Much like my students, I get cranky when I’m hot, so the thought of turning on the oven after work was not happening. In fact, I really didn’t do much baking or cooking at all last week – I just kind of adjusted to being awake at ridiculous o’clock and also got caught up on episodes of Big Brother.

Stop judging me! It’s become a little bit of a guilty pleasure and I kinda think Frank is adorable. I’m also obsessed with watching him dodge bullet after bullet.

Since I slacked all week, I decided to use my time wisely this weekend and whipped up a last couple of summery desserts. I’m warning you now, once the calendar hits September, I am in full-fledged Fall mode. I don’t care if it’s still 90 degrees, I will be busting out the pumpkin, apples and cinnamon – so get ready! 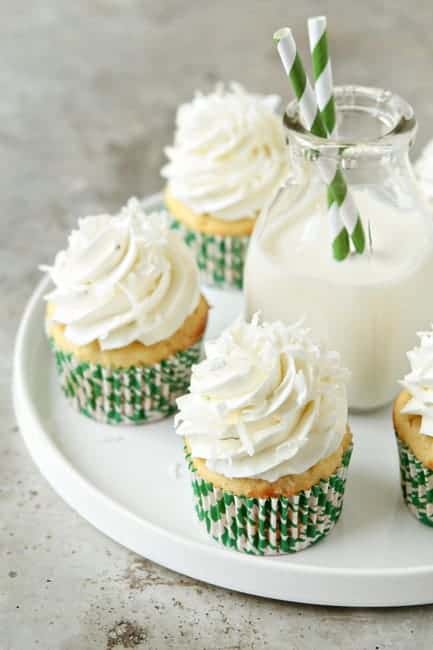 After a quick scan of the fridge and pantry, I realized that not only did I not bake last week, but I was also lacking in the whole grocery shopping department. I did have a few basics, so I decided to make do with what I had – putting off that horrible task for one more day. Hooray for procrastination!

This little impromptu baking session resulted in easy, crazy delicious coconut cupcakes topped with what is probably the best buttercream I’ve ever made. I kid you not.

The cakes are made simply, with my favorite Doctored Up Cake Mix recipe. The buttercream, however, is transcended with the addition of coconut milk and lime zest with a few fresh, Summery flavors to create one of the most dreamy cupcakes ever.

I’m pretty confident that these Coconut Cupcakes are the perfect way to celebrate the end of Summer! 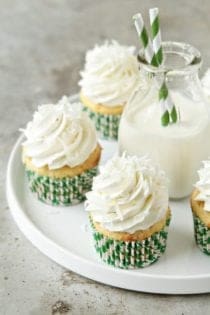 – The Amazon links within this post are derived from an affiliate program. My Baking Addiction receives a small commission on products that are purchased through these links. 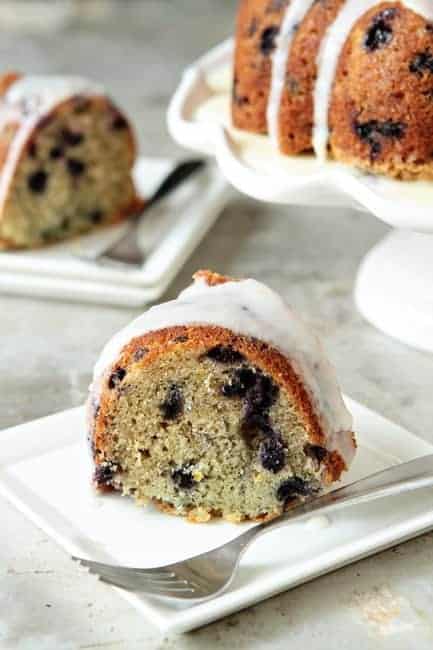 One of the best cupcakes i've ever tasted! thanks for this amazing recipe <3

I have made these three times for different events. People say they are the best cupcakes they have ever eaten and I have to agree. Thank you for posting the recipe.

So happy to hear you enjoyed the cupcakes, Sue! Thanks so much for stopping by and leaving your feedback! -Jamie

Omg, I made a similar version of these yesterday for my dad's 75th birthday party and they were a hit. I even put some coconut in the batter and also toasted the coconut to put on top. I used store brought frosting because making frosting isn't my thing. Actually I'm good at taking box cake mix and making it what I want it to be. But anyway I use the cream cheese frosting and that was perfect.

I see you have a lot of recipes with box cake mix so your blog will be my go to for ideas. Thank you for letting it be know that you can make a box cake mix your own you just have to know what you're going for.

Thanks so much for stopping by, StaSea! I appreciate you taking the time to comment. Happy Baking! -Jamie

First, I must say, these are the BEST cupcakes I've ever had.   This is my go-to recipe now.   I want to make this into a four stake wedding cake.   any conversion ideas on how much I will need in ingedients.  I know it will be a lot, but definitely worth it.  Thanks for any help

Sherry- I have never made a wedding cake in my life, so I have no idea where to even begin. I hope it works out for you though! -Jamie

I'm going to try these again...my first batch sunk in the middles! Boo. I've read through previous posts to figure out what I need to do differently. Hoping my next batch is successful as I have a wedding order for 100 coconut cupcakes (and 300 more of other flavors)!

Let me know how it goes, Brenda!