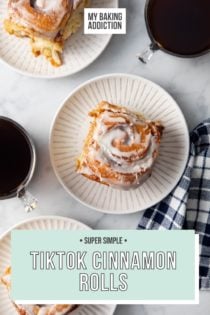 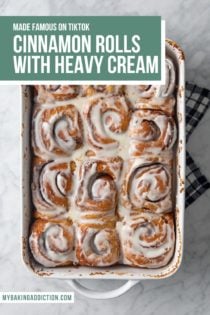 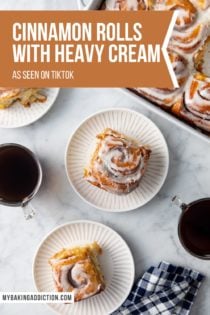 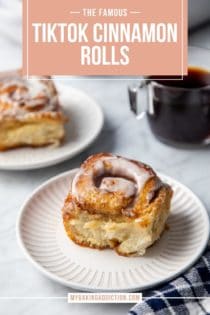 Looking for the easiest way to make cinnamon rolls that taste homemade? Give these cinnamon rolls with heavy cream (AKA the famous “TikTok cinnamon rolls”) a try! They’re so good, no one will guess you didn’t make them from scratch.

Every once in a while a recipe will show up on my TikTok FYP that I have to make immediately. Most recently, it was the ultra-viral TikTok Cinnamon Rolls.

I kept seeing multiple variations that Stephie (my right-hand woman) and I both tested and we finally landed on what we think is the absolute perfect version made with Rhodes Frozen Cinnamon Rolls. However, this recipe also works pretty well with a couple of cans of cinnamon rolls.

Trust the process because when you watch the video, you might be a little skeptical like me and think, “Where the heck does the heavy cream go?” But I promise you it works and you end up with cinnamon roll perfection without the hassle of making your own dough.

Truly the only thing that kicks these up a notch is a homemade cream cheese icing, but the one that comes in the Rhodes bag is pretty darn delicious.

I have made these no less than 5 times in the past month and not one person questioned if they were homemade.

We loved them so much, we reheated them for dessert and served them alongside a scoop of vanilla or cinnamon ice cream!

I’ve been inspired by my TikTok FYP a few times before. It was because of TikTok that I gave both brown butter chocolate chip cookies and cheesy ranch pull-apart bread a try. There’s just something about that app that knows what I’m going to end up craving.

So when I saw someone pour heavy cream over a can of Pillsbury cinnamon rolls before baking them, you know I was intrigued.

And then a few days later, I saw someone do the same thing with Rhodes frozen cinnamon rolls.

I gave both versions a try and let me tell you – TikTok doesn’t lie. This is one simple way to make pre-made cinnamon rolls taste homemade!

Our family prefers the frozen cinnamon roll version of this recipe, but the Pillsbury version is super quick and still delicious in a pinch. I’ll walk you through how to make both!

HOW TO MAKE CINNAMON ROLLS WITH HEAVY CREAM

I love my overnight cinnamon rolls, but these cinnamon rolls with heavy cream are going to be my new stand-in when I just don’t have the time or energy to make a yeast dough.

I took the method I saw on TikTok and gave it my own MBA twist. These cinnamon rolls are rich and decadent and the simplest things ever.

The combination of the heavy cream and the brown sugar syrup make the rolls fluffier than normal and creates a sticky syrup on the bottom that keeps the cinnamon rolls nice and moist. They’re like a cross between a cinnamon roll and a sticky bun!

To make this recipe, you will need:

If you want to really take these cinnamon rolls with heavy cream up a notch, you can use a homemade frosting instead. I would recommend using the cream cheese frosting from my pumpkin spice cinnamon rolls.

You can make these cinnamon rolls all on the same day or start them the night before.

Place all 12 of the frozen cinnamon rolls in a greased 13×9-inch baking pan and cover the pan with plastic wrap.

Let the rolls thaw overnight in the refrigerator (for 8-16 hours) or on the counter for 3-5 hours.

Once the rolls have thawed and doubled in size, pour the heavy cream directly onto the rolls. Let this rest for 5 minutes.

While the rolls rest, whisk together the butter, brown sugar, cinnamon, and vanilla. Pour this over the tops of the rolls. Use a spatula to spread it out evenly.

Bake the rolls for 30-35 minutes or until the cinnamon rolls are golden brown. Let them cool for about 10 minutes before topping with the cream cheese frosting and serving.

Like I said, I’ve made both versions of these cinnamon rolls with heavy cream. While our family prefers the frozen cinnamon rolls version because we think they taste more like homemade cinnamon rolls, I’ll definitely make the Pillsbury version again in a pinch!

It’s a great way to really elevate a can of cinnamon rolls.

To make the Pillsbury version, grab two 8-count cans of Pillsbury Grands Original Cinnamon Rolls. Place the rolls in the greased baking dish, cover with the heavy cream, and continue with the recipe as written.

Since you don’t have to factor in the thawing and rising time, this version is much faster to make!

Store any leftover cinnamon rolls with heavy cream covered in the refrigerator for up to 2 days.

These cinnamon rolls are best when they’re warm, so I recommend reheating leftovers. Place a cinnamon roll on a microwave-safe plate and microwave for 30-60 seconds before eating.

If you’re anything like me, you’re always on the hunt for easy make-ahead breakfast recipes that can be prepared the night before (or even days before!). If you like these TikTok cinnamon rolls, you should give these other make-ahead breakfasts a try: 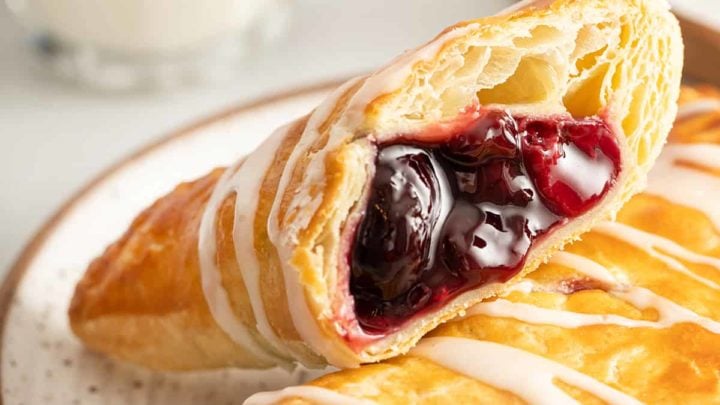 Homemade cherry turnovers are made with just a handful of ingredients! Bake these right away or freeze them to bake later whenever a craving strikes. 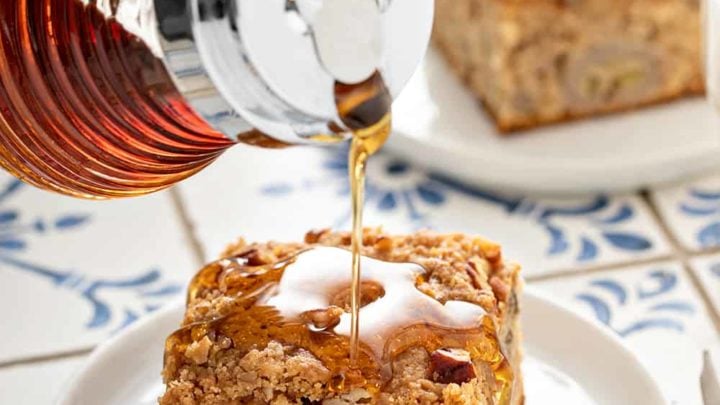 Bisquick mix is the secret ingredient to this banana coffee cake! Bake it the same day or prep it overnight to bake in the morning. 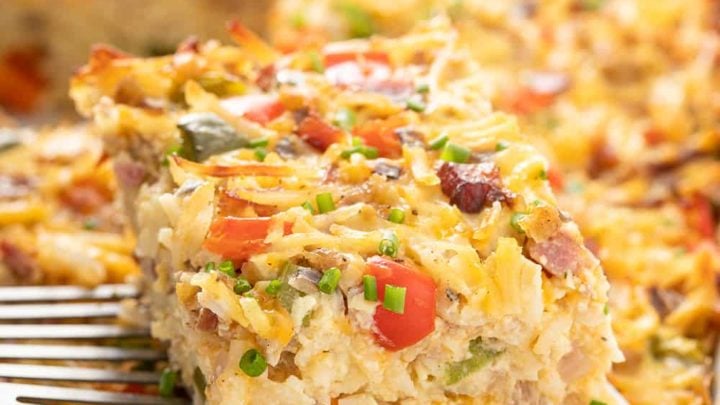 If you love eggs and hash browns, you'll love this hash brown breakfast casserole. Mix it together the night before and bake it the next morning for a filling breakfast that everyone will love. 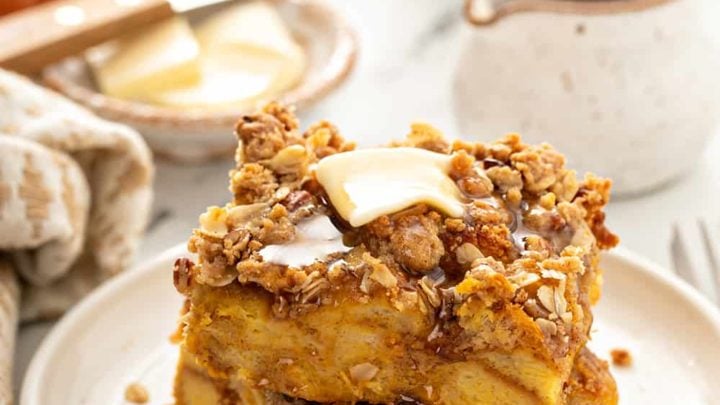 If you love french toast but hate frying all of the pieces, this pumpkin french toast casserole is for you! Easy to make ahead, this sliceable french toast is bursting with fall flavors for a perfect cozy breakfast. 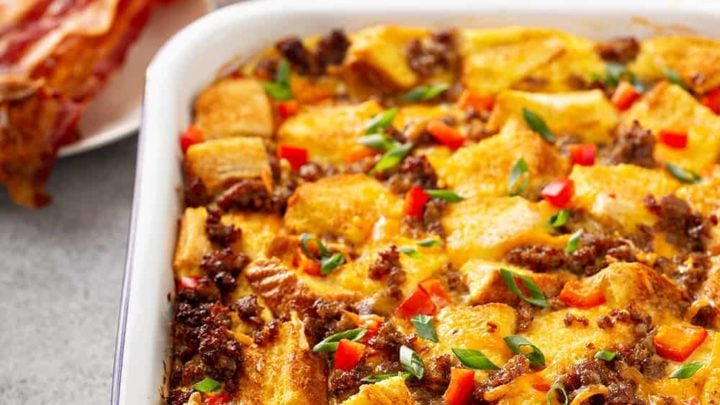 This recipe is my all-time favorite make-ahead breakfast casserole! Make it as written or swap in some of your favorite veggies to make it your own. 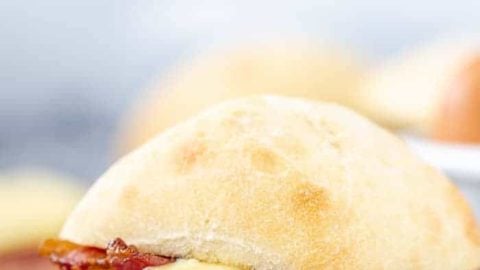 If you love the Starbucks breakfast sandwiches, you'll adore this homemade version! Make these on the weekend and freeze them for the week ahead. 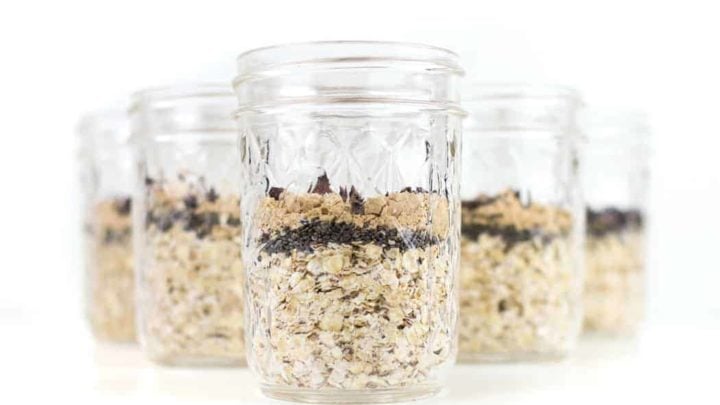 Peanut Butter Overnight Oats are the perfect make-ahead breakfast for busy mornings! Prepare a ton in advance, get them ready the night before and enjoy a nutritious breakfast on the go.

If you want an even quicker way to make this recipe, use 2 (8-count) cans of Pillsbury Grands Original Cinnamon Rolls. Place the rolls in the greased baking dish, eliminate the thaw and rise steps, and follow the recipe starting from preheating the oven. Bake for 25 minutes.

These are the best cinnamon rolls! I added some homemade cream cheese icing to the Rhodes icing just to have a little bit more. I can’t wait to make these again!

So glad you enjoyed these! Thanks so much for stopping by and sharing your feedback. Happy baking! Jamie

If I let them rise overnight doI have to let them sit a while before I bake them?

Hi Lisa – I usually just let them sit out on the counter while the oven preheats. Hope this helps! Happy baking – Jamie

Can you substitute whole milk for the heavy cream?

Hi Kim – You do need to use cream for this recipe. Whole milk and half-and-half will not work here. Hope this helps! Happy baking – Jamie

What is the benefit of baking with the heavy cream and added cinnamon/sugar compared to just baking right from the can? Going to try this regardless just Intrigued :)

I can't speak to the science of what happens when you add the heavy cream, etc, but something magical happens in the oven that makes them SO much better than the rolls straight from the can! You have to try it to see :-) Happy baking! Jamie

Thanks for stopping by and commenting, Liz! Happy baking – Jamie